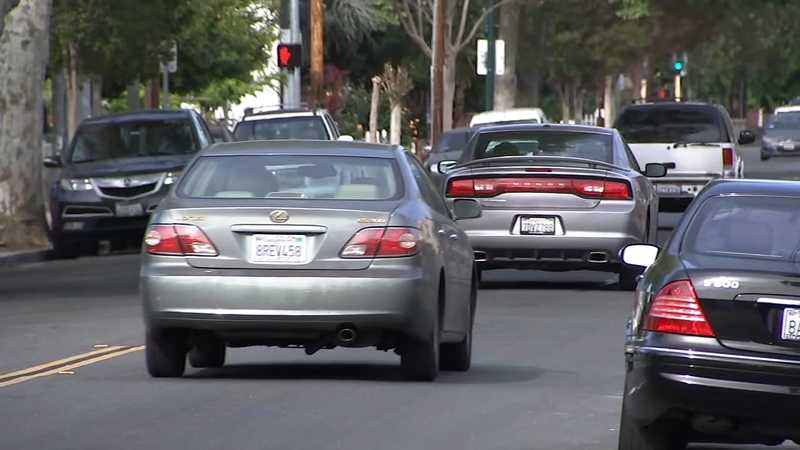 For years, residents have been fed up with dangerous drivers coming through the area. They've pushed for more traffic calming projects by the city, to increase safety in the neighborhood.


A viewer and resident named Danny Rey shared video with ABC7 News, showing a white car barreling through a red light on East Julian and North 17th streets. The car is captured striking a cyclist. The video was taken after 5:30 p.m. on Easter Sunday.

It's a scene that isn't new to Northside neighborhood resident, Paul Marshall.

"That's quite a scary thing to think about," Marshall told ABC7 News. "I'm a cyclist as well, and I go through the neighborhood quite often. So, I have seen things with my own eyes."

His Nest camera has also captured other examples of dangerous driving. In video shared with ABC7 News, Marshall's camera caught multiple cars speeding down his street. The loud screeching of brakes is easy to hear and recognize.

"In our neighborhood, our blocks are quite long, but we have stop signs on either side," he explained. "So, if I hear a high revving engine with a modified exhaust of some sort, then it kind of clues me in to pay attention."

Marshall continued, "Then you'll just hear them- full, foot to the floor, going down the street, and I know they're not stopping. There's no way they could get up to that speed as quickly as they do."

He said it's even more difficult to trust that these cars will to come to a complete stop after speeding, because vehicles today are made much more powerful than they used to be.

"It would be nice to not have to have that fear when you're out enjoying your neighborhood. And the Northside, we're a proud neighborhood," Marshall shared. "We're working class, just nice people that live here. And we just want the same as everybody else, and it's to live here and to live without fear of getting killed in a really bad accident."

San Jose city leaders voted unanimously to keep businesses operating safely outdoors, outside through the end of the year.

These concerns have fueled Councilman Raul Peralez's push to have larger traffic calming projects funded for the Northside.

"I had committed to the community that I would try to get additional resources and more significant resources to be able to hone in and get some of these larger traffic calming projects funded," Councilman Peralez told ABC7 News. "I was able to get an additional $100,000 that we were able to allocate for the Northside area."

He explained that his office and the community went through an extensive process to identify areas of high priority. The process included a number of community meetings, and talking to neighbors.

"As you can imagine, a lot of different areas, corridors, intersections came up. A lot more than what $100,000 would be able to fund," Peralez admitted. "So, we had to go through the process of identifying, 'Okay, what were the top areas that we could really address?'"

19th and 21st streets, between Taylor and Julian were identified as highest priority areas. The goal would be to get speed humps on 21st St. and rubber median islands installed on 19th St. by summer.

Peralez told ABC7 News, it is action that depends on whether his office can get 51-percent of neighbors in the surrounding area on-board, and whether there is 100-percent buy-in from those living in homes where the humps will be laid.

"We're looking at that along North 21st Street. That requires buy-in from 51-percent of the property owners along the area. And you need 100-percent buy-in from the individuals that own a home right in front of where the speed hump will be," he elaborated. "Similarly, on 19th Street, what we're looking at implementing, we need to get buy-in from the immediate property owners that will be adjacent to it... And we're already getting a little bit of pushback."

"Even though they might want the traffic calming, they don't necessarily want these traffic calming implementations happening right in front of their home," Councilman Peralez detailed.

However, residents we spoke with said this would be a significant step toward safer streets.

In an effort to inform and educate residents about what changes may come, Peralez said his office and a team of volunteers are canvassing the neighborhood to connect with those who stand to be impacted. He said the on-the-ground effort should last a few weeks.

"This is pretty quick because we need to be able to get past this step to get the buy-in," Peralez told ABC7 News. "That way, we can set up the construction schedule and get everything moving. If we can't get the buy-in from the immediate residents, if we can't get the 51-percent vote on 21st street that we need, we won't to be able to move forward."

"We need to overcome that hurdle," Peralez stressed. "We really want to get this traffic calming implemented."

Beyond the planned projects, Peralez said he's also been advocating for more enforcement.

"Something I've been fighting for is continuing to beef up our traffic enforcement unit from the police department. Fortunately, we have been able to add some additional officers over the last couple years," he told ABC7 News. "And it's because of corridors like this, where we know even with the best traffic calming measures, people still violate the rules of the road, that we need to have that component."

"In addition to these traffic calming measures, we need to have the enforcement... and so that's really what we're looking for," Peralez explained.

Marshall acknowledged, "The writing is on the wall that more traffic is coming. We're continuing to grow. There's housing developments, which means more cars. We're going to influx with a lot of people, and that means a lot more vehicles."

"So we need to start making those changes before we have an issue, and before we have a fatality again," he added. "We have kids that are riding their bikes to schools, and they're being put in danger."