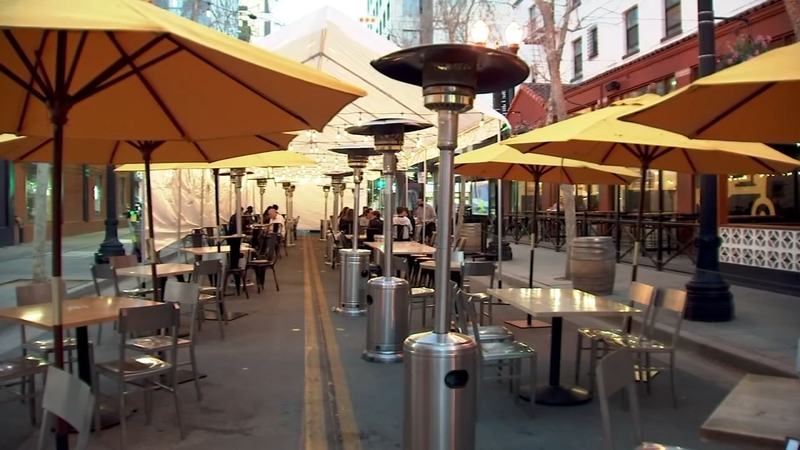 An extension of the city's "Al Fresco" program came down during Tuesday's city council meeting. It means outdoor dining is here to stay, beyond the initiative's initial March 31, 2021 expiration date.

Bouren spent his Tuesday afternoon putting up shade outside his business. He's banking on this week's warm weather forecast and the beloved Al Fresco program to bring people out.

"It really gave us the lifeboat that we needed, in a time when we were just looking at what, six months to a year, of no revenue at all," he shared. "Which, in the world of paying rent on time and keeping your payroll going, that's really not a good forecast."

Bouren explained that without the outdoor option, Haberdasher would've been history, mid-summer 2020. With Tuesday's vote, he and other businesses will be able to operate outdoors until at least December 31

Diners told ABC7 News, besides setting up businesses for success, the move takes their safety into consideration.

"I was itching to come out and just do it," San Jose resident, Manny Natareno said about eating outdoors. "Without really having to worry about it or having to worry about being indoors. Even with the 25-percent restriction that they had before. Even if it was indoors, it's still a little scary."

Tony Oneto shared, "When it started opening back up, we were wondering... What's going to happen? Outdoor dining was the perfect opportunity to help businesses kind of stay afloat, or at least keep going."

RELATED: It's allowed, but is it safe? We asked 3 doctors if they'd go along with orange tier reopenings

However, the city's Code Enforcement revealed Al Fresco isn't for everyone.

During Tuesday's discussion on Al Fresco, Rachel Roberts with Code Enforcement told councilmembers, "We have had about 13 complaints." Roberts said the number reflects how many complaints have been made since April 2020.

She explained the complaints were primarily concerns over noise and outdoor structures.

RELATED: Having trouble getting vaccinated? Here are more ways to find an appointment in Santa Clara Co.

On Tuesday, Bouren told ABC7 News the pandemic has uncovered opportunity, "The biggest thing it gave us was an opportunity to adapt and adjust, and to offer some kind of experience- when we could-safely to our guests."

He believes the Al Fresco experience will have a place in a post-pandemic world.

While Bouren wasn't surprised to hear city leaders voted to support the extension of the Al Fresco program, he said he didn't expect such quick action.

"I was pleasantly surprised that our civic leaders weren't just, 'on it'- they were aggressively, all over trying to do whatever they could within their power to keep us working," he shared.

The city of San Francisco has its own similar program called Shared Spaces. It's unclear whether that program will be extended, or whether it will be made permanent.

However, San Francisco Mayor London Breed announced in mid-March, that she would introduce legislation to make the city's Shared Spaces Program permanent.