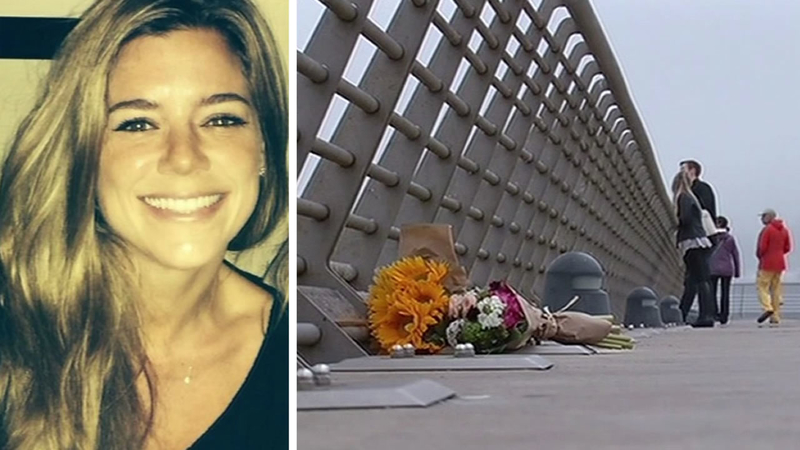 Bullet that killed Steinle at Pier 14 appears to have ricocheted

SAN FRANCISCO (KGO) -- The single bullet that struck and killed Kate Steinle, 32, in broad daylight on San Francisco's Pier 14 in July appears to have ricocheted off of the pier walkway prior to hitting her, according to expert testimony provided Wednesday during the second day of the murder suspect's preliminary hearing.

Officials say the gun Francisco Lopez Sanchez is accused of firing was not actually pointed at Steinle, but at the ground.

San Francisco police criminalist and ballistics expert Gerald Andrew Smith displayed the gun that was used in the shooting. It was a black Sig Sauer P239 .40 caliber semi-automatic pistol that had been recovered by divers from the San Francisco Bay near Pier 14 the day after the homicide.

Smith said one round had been fired from the seven cartridge magazine clip and that the gun was still functioning normally.

Under cross examination, public defender Matt Gonzalez repeatedly asked Smith if it was possible the gun could accidentally discharge without Sanchez pulling the trigger. "No matter how the trigger was pulled, that's the only way the gun could have been fired," Smith said.

On Tuesday, the prosecution established through the testimonies of police investigators that Sanchez was at Pier 14 when Steinle was shot to death on July 1.

Cellphone images taken by tourists and displayed in court showed a man who appeared to be Sanchez sitting on the bench and then walking off after the shooting.

One of the tourists later identified Sanchez after he was arrested at Embarcadero and Townsend streets that evening.

An investigator also testified that Sanchez had confessed during his interrogation, which is the same thing he told ABC7 News during a jailhouse interview.

A police inspector testified that the bullet struck the pier walkway first at least 15 feet away and then ricocheted striking Steinli in the back.

Gonzales surmised that the gun was not pointed at Steinle, but at the ground when it was fired.

San Francisco's chief medical examiner, Dr. Michael Hunter, said the autopsy showed Steinle suffered a fatal gunshot wound to her back and that the bullet struck her aorta and lodged in her abdomen.

Hunter said the bullet that struck Steinle was traveling in a slightly upward direction. "It is an atypical entrance wound, which to me has a lot of significance," Hunter said on the stand. "This is anything but a classic entrance wound."

He said that due to the "rectangular" shape of the entry wound, before the bullet entered the victim's body, it either ricocheted off a hard surface, traveled through something, or there was a defect with the barrel of the gun.

He said, in his expert opinion, that it was consistent with a ricocheted bullet.

A photograph of the bullet, which normally would be cylindrical, shows that the one taken from Steinle's body is crushed and covered in striations.

The preliminary hearing will continue Thursday at 10 a.m., at which point the defense it expected to call additional witnesses to the stand.

SFPD Inspector testifies in Pier 14 murder case that the bullet hit pier walkway first then richochetted striking Kate Steinle in the back.