"And then she (Mayor Breed) went to Europe and said, 'Come to San Francisco. It's fine.' Um, no, it's not fine. It's really not."
KGO
By Liz Kreutz 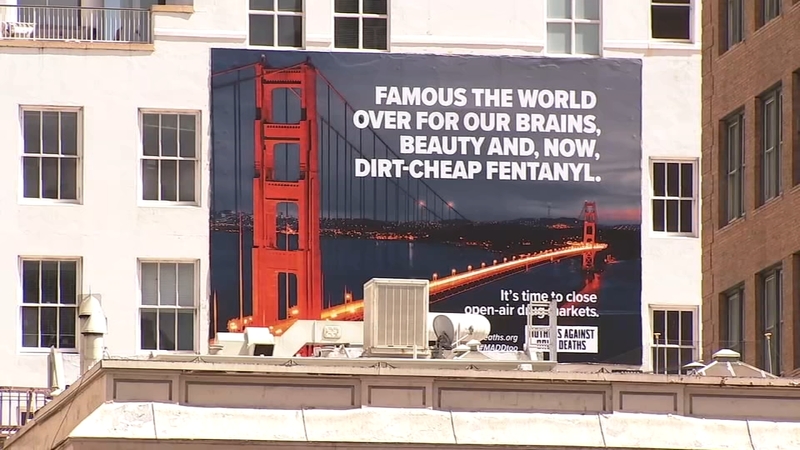 The group, called "Moms Against Drug Deaths," spent $25,000 on a new billboard in Union Square that reads: "Famous for the world over for our brains, beauty and now dirt-cheap fentanyl."

"It is cheeky. We hope it gets attention," Gina McDonald, one of the group members, told ABC7 News.

"Moms Against Drug Deaths" is made up of a small group of women with children who have either died from -- or are addicted to -- fentanyl. They hope their campaign brings awareness to the city's open-air drug market.

COMING SOON TO SAN FRANCISCO: This billboard calling out the city’s drug crisis

“Famous the world over for our brains, beauty and, now, dirt-cheap fentanyl.”

The group “Mothers Against Drug Deaths” is behind the campaign. The billboard will be up starting Monday in Union Square pic.twitter.com/C0cxhiURoc

The lead organizer is Jacqui Berlinn, whose son is currently an addict living on the streets of San Francisco. She said their group launched the campaign after Mayor Breed's decision to end the state of emergency in the Tenderloin, followed by the mayor's recent trip to Europe where she pitched San Francisco as a safe, enjoyable place for tourists.

"And we're like, wait a minute, it's not changed. We should still be in a state of emergency," Berlinn said. "And then she went to Europe and said, 'Come to San Francisco. It's fine.' Um, no, it's not fine. It's really not."

Here is the “Moms Against Drug Deaths” billboard, now up in Union Square. Member Jacqui Berlin says they hope their message reaches Mayor @LondonBreed. She says they’re considering putting some up in European airports if they don’t see real change soon. pic.twitter.com/GCR9ohPkPu

McDonald said the group took the Mayor's pitch as a "slap in the face" and they ultimately decided the billboard was the answer.

The group said they used their own savings and donations to pay for the $25,000 ad campaign.

"The passionate campaign being launched today by MADD, although impactful, is not the solution as it will only hurt local small businesses and our hospitality workers who just now are beginning to crawl out of the economic disaster caused by COVID and its continuing fallout," the statement said.

VIDEO: Father recounts what it's like to raise a child surrounded by drug dealing and crime in SF's Tenderloin
EMBED More News Videos

Joe D'Alessandro, the CEO of the San Francisco Travel Association, said they agree the city needs to address the drug crisis but believes a campaign putting down San Francisco is not the answer.

"They're asking people to stop coming to San Francisco right now," he said, "So that hurts people tomorrow."

Many of the San Francisco tourism/business associations have come together to respond to the billboard going up in Union Square calling out the city's drug crisis.

"Although impactful [it's] not the solution as it will only hurt local small businesses & our hospitality workers" pic.twitter.com/26qrgHUQ9m

A spokesperson for Mayor Breed argued the city is working to crack down on drug use.

" The Mayor agrees that we need to break up open-air drug dealing in San Francisco. Police officers are making arrests every day, and in the last few weeks an additional 20 officers have been added to the Tenderloin neighborhood to support our emergency response initiative," the spokesperson said in a statement. "The Police have seized over 10 kilos of fentanyl in the Tenderloin area this year alone, which is roughly four times more than was seized over the same time period last year."

"We know more needs to be done to make more arrests, but there also needs to be accountability for the people who are dealing drugs, committing acts of violence, and making our communities less safe. We also need to increase access to services and treatment," the statement continued. "We've hired over 200 new behavioral health workers, opened the Tenderloin Linkage Center to provide people who are suffering with issues relating to mental health and addiction with the help they need, and are in the process of adding hundreds of mental health and substance use beds."

It says Breed agrees open-air drug dealing needs to end & says this year police have seized 4x the amount of fentanyl in the Tenderloin compared to the same period last year pic.twitter.com/2WBkfrws1J

Moms Against Drug Deaths, however, said they are not seeing enough change. They felt their recent protest about drug use at the newly opened Linkage Center fell on deaf ears and that they needed to do more to get the city's attention.

Berlinn said if they don't see change and progress soon, they may expand their campaign internationally. She said they may place these billboards in European airports to warn people about San Francisco.

"I know it's not going to happen overnight. It's not a fast fix," she said. "But we need to start moving that direction."

Their campaign is in response to Mayor Breed’s recent trip to Europe where she pitched San Francisco as a safe place for tourists pic.twitter.com/GXYSZM5A63