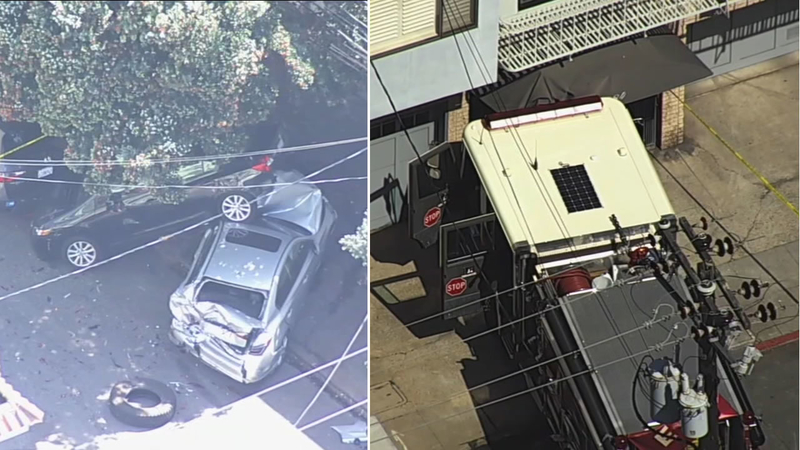 SAN FRANCISCO (KGO) -- Two San Francisco fire engines collided in the Cow Hollow neighborhood while responding to the same call on Friday, according to police.

The crash happened at the intersection of Greenwich and Laguna streets.

Two trucks from different fire stations were heading to a call when they tried to avoid each other but crashed at the intersection shortly after noon.

One truck also hit two parked cars with so much force one car ended up on top of the other car. That fire truck ended up almost hitting the gray apartment building.

The owner of one of the parked cars was home across the street at the time watching TV.

"I was expecting a bracket buster but I got a car buster," said Grant Miller.

Two San Francisco fire engines collided in the Cow Hollow neighborhood while responding to the same call on Friday, according to police.

Miller says he just bought the car six months ago.

"That's not a hit, that's a car on top of my car. It's all crazy. I'm still in shock. I bought that and I worked hard for it and now it's destroyed," said Miller.

Lieutenant Jonathan Baxter with the San Francisco Fire Department says there will be an investigation as to how this could have happened.

"Everything we can speculate we will be looking into, our training systems, expectation of driver operators, responding to an incident. All these things will be factors will be looked into by SF police department and but also through our administrative leave," said Lt. Baxter.

Baxter says the good news out of all this is that no one was hurt.

One of the fire trucks was able to be driven away.

And both cars were eventually towed.