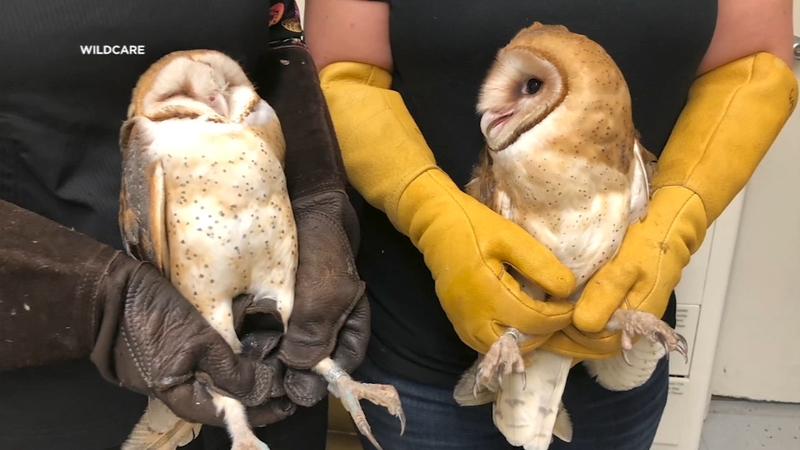 SAN FRANCISCO (KGO) -- You may have heard of squirrels or raccoons getting stuck in attics or buildings.

Here though is the story of three owls that had to be rescued from a San Francisco roller rink back in February.

"I just couldn't believe what I was looking at then when I saw him land, he landed next to another owl, they had perched themselves right near the DJ booth. It was amazing," said David Miles of Church of 8 Wheels.

Yes the owls were inside the Church of 8 Wheels, a former church that is now a San Francisco roller skating rink. As the music played, video posted to Facebook showed these owls appearing to dance. Those from the non-profit WildCare Wildlife Hospital saw the video and grew concerned.

"That is not an animal dancing or enjoying himself. That's a very stressed wild animal trying to use his senses and triangulate and figure out what is happening," said Alison Hermance, WildCare Director of Communications.

Those with WildCare found someone with Bay Raptor Rescue to catch the two owls who had likely been high above, but inside the roller rink for 5 to 7 days. They were immediately put in an oxygen incubator with IV fluids and feeding tubes at the WildCare facility in San Rafael. One of the two birds passed away within the 48 hours after their rescue but,

"Then I come back another day and I see the exact same thing. This thing flitters through and I'm like 'what is this?' It's another owl," said Miles.

Back came Bay Raptor Rescue who successfully caught the third owl. Miles and others then boarded up holes among the stained glass windows where the owls likely came inside.
"They will really enthusiastically investigate anything that looks like a hole that could be a potential nesting sight and for these birds, the problem was it didn't go to a nesting sight, it went to a roller skating rink," said Hermance.

Over the course of the next 3 plus weeks a happy ending, the two remaining owls gained their strength and were released atop the building where an owl house was constructed. A house that sits right under the old church bell and a spot where the owls can easily search for rodents.

"Every time we open we ring the bell, the entire neighborhood hears it. It's part of the charm of the Fillmore but now we don't ring the bells anymore because we want them to live there," said Miles.

"We're watching and waiting to see if we also made a love match exactly," said Melanie Piazza, WildCare Director of Animal Care.

Those with WildCare wrote about their experience. You can find that here: https://discoverwildcare.org/trappedbarnowls