'Light at the end of the COVID tunnel': Hundreds of San Jose Sharks fans welcomed back to SAP Center 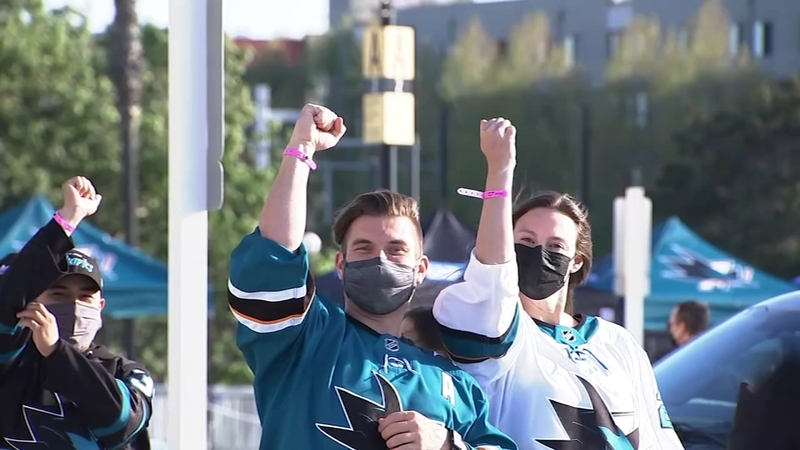 Hundreds of SJ Sharks fans welcomed back to SAP Center

SAN JOSE, Calif. (KGO) -- No artificial fan noise was necessary for Monday night's San Jose Sharks game. For the first time in 14 months, fans were welcomed back into the SAP Center.

ABC7 News captured cheers from season ticket holders, as doors opened to guests ahead of Monday's game against the Arizona Coyotes.

With protocols fit for the pandemic, fans said being welcomed back into "The Tank" proved we're finally taking a step forward.

"This is finally like the light at the end of the COVID tunnel," Ann-Marie Nelson said.

Fan, Angie Varni explained, "It's almost like taking our kids to kindergarten for the first time. Like, not knowing what to expect."

The team is taking every precaution. Ahead of Monday's reopening, Sharks President Jonathan Becher told reporters about the number of changes to be expected.

A quick rundown includes fans having to be masked. Visitors will need to show proof of completed vaccinations or a negative COVID-19 test. For a fee, there's even an option to test on-site. Specific changes can be found here.

For the first time since March 10, 2020 fans were actually back at Chase Center. Health and safety protocol signs were everywhere, a reminder of all the precautions being taken for everyone inside Chase Center.

Once fans were through on Monday, bright pink wristbands gave guests the green light to attend.

Darrel Varni shared, "What I'm looking forward to the most is when they say, 'SHARKS GOAL,' and to hear that over the loudspeaker finally."

"Feeling the cold of the ice, seeing the players actually come out," Garrett Anaya added. "We miss it. We miss it a lot. So, it's going to be great to see them live."

Becher also explained the team would be opening up to the most tenured season ticket holders first. Then, they plan to follow what he described as a "seniority process" for future games.

RELATED: SF Giants to welcome fans back to Oracle Park for home opener

He added, "Up to this point, I hadn't missed a game in about nine seasons."

Mason's streak was cut short because of COVID-19. However, he and other fans say they'll take what they can get.

"It's probably not going to be the same because there's hardly anybody there," Eric Nelson shared. "But we're still there!"

Darrel Varni told ABC7 News, "We're season ticket holders. We were at the last game, then we left and we never came back. So it's like... finally! We're so ready to be here."

"This is a big one. I mean, grocery store and bank," his wife, Angie added about the only places they've frequented during the pandemic. "So, now we're coming in hot!"

The team told ABC7 News that between 500 and 600 people were in attendance during Monday's game. They said if current protocols prove to be successful, they have the room to include more fans for future games.