Thinning snowpack indicates wider challenge for California, other states across Western US 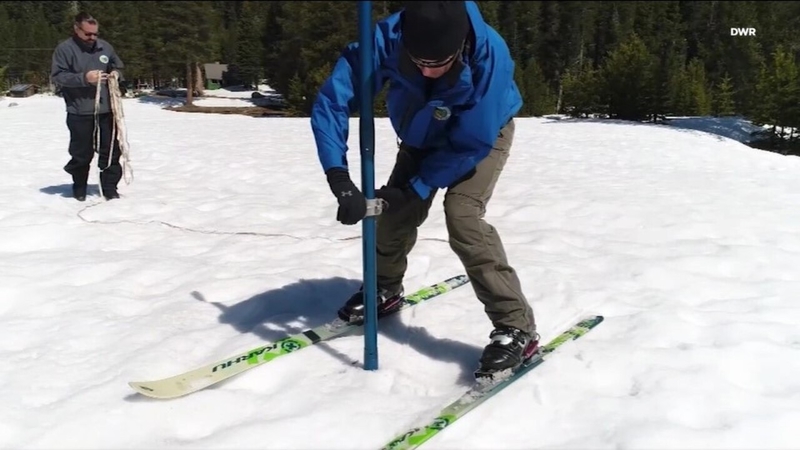 SIERRA NEVADA (KGO) -- While snowpack measurements are sending a sobering message to California, a new study is painting a broader and perhaps even more urgent picture.

Kaitlyn Weber is a researcher with the weather non-profit Climate Central. She helped analyze data on the on-going drought in the Western United States, and its effect on snowpack, reservoir and ground water levels.

"And so across most of the West, we're seeing aquifers are really depleted. They're very dried up, and we haven't had them on precipitation to really recharge those aquifers. So the conditions are really dire," Weber explains.

She says the driest of those readings show up as a splattering of red, stretching from the Colorado River basin, through Arizona and California, and into the Northwest. But just as concerning is the evidence showing the acceleration at which the snowpack is melting.

New readings showed the water in California's mountain snowpack sat at 38% of average.

The Climate Central report draws from a NASA satellite project known as GRACE-FO, which calculates moisture levels over a broad area by measuring surface gravity.

"And we can do things like look at the amount of water stored in the Sierra Nevada, or in aquifers around the world. Look at how they've been changing over time, their ups and downs, they have a seasonal cycle, generally. But then also, in some cases, we've seen a longer term trend. And unfortunately, a lot of those trends have not been the direction we want to see," says NASA researcher Matthew Rodell, Ph.D.

With snowpack contributing to more than half the water supply in the Western U.S., they say pressure on water systems shared by multiple states is likely to increase dramatically during summer months.

"So we're going to have less of it when we get to the end of the dry season when we really need it the most. So definitely happening all throughout the Colorado River Basin as well as the Sierra," says Weber.

We may soon have an even more detailed understanding of our water situation moving forward. NASA is also conducting satellite research that will ultimately measure flows of water through rivers and tributaries. Providing a look at their health as well as the drought impact.