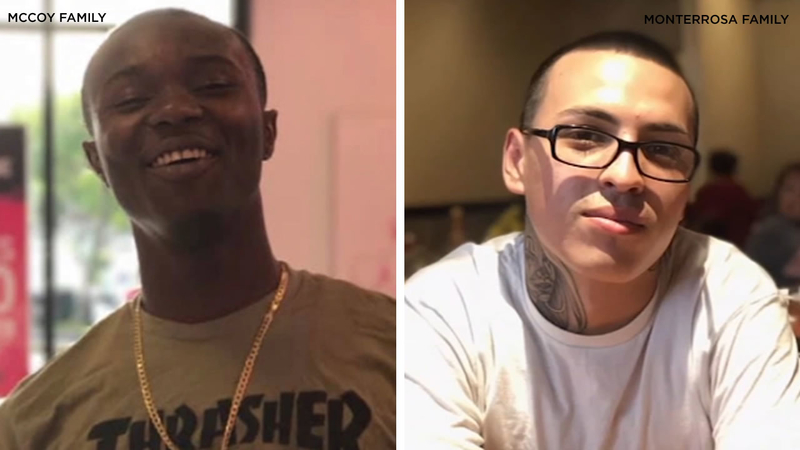 "It was clearly an execution," said Kori McCoy referring to the body-worn camera video of the Vallejo police shooting that killed his brother.

It's some of the last images Kori has of his brother Willie.

"I am so hurt by the fact that he will not ever have that chance to complete his life and see what he could have become," said McCoy.

The shooting would have been reviewed by Solano County District Attorney Krishna Abrams but instead, Abrams recused herself.

Solano County hired an independent special prosecutor who ultimately determined the officers felt their lives were threatened and acted in self-defense.

It's not the only case Abrams recused herself from. She also would not investigate the June 2, 2020, Vallejo police fatal shooting of Sean Monterrosa outside a Walgreens where there had been looting.

"She's just holding that seat for someone else who can do her job," said Sean's sister Michelle Monterrosa.

"Why were you unwilling to investigate the Willie McCoy shooting or the Sean Monterrosa shooting?" ABC7 News I-Team reporter Melanie Woodrow asked Abrams.

"I was listening to my community. My community was saying we don't believe that you can be fair based upon a perceived conflict even though we absolutely could have been fair," said Abrams.

Monterrosa's sisters called for the attorney general's office to investigate and for months the case was a hot potato.

Weeks after taking office in April 2021, Attorney General Rob Bonta said this on May 13, 2021, about Abrams:

"What was your reaction to the attorney general saying that?" Woodrow asked Abrams.

"Well, I don't care what the attorney general says, I care what my community thinks," said Abrams.

"Do you have any sense of what AG Bonta's feeling are about you seeking a third term?" Woodrow asked.

She says she serves the people of Solano County.

In an emailed statement to the I-Team, a spokesperson for the AG's office writes, "At the California Department of Justice, we're committed to working with all of our partners across the state to stand up for the people of California. As part of that, we'll continue to engage with all locally elected officials and leaders to protect Californians from crime, ensure accountability, and secure justice."

Abrams does not have the support of Sean Monterrosa's sisters, Willie McCoy's brother or the McCoy's family attorney.

"We think that after not taking on our brother's case and the other cases of impacted families in Vallejo that she would actually step down," said Ashley Monterrosa.

"She is not willing to do the entire job of a district attorney which includes prosecuting police officers when they are breaking the law," he continued.

"It take a lot of audacity to refuse to do your job and then run again as an elected official," said Melissa Nold, McCoy's attorney.

Abrams says she does have the support of many others and provided a list of dozens of endorsements from local politicians, legislators and members of law enforcement.

Abrams also says the county's November 2020 creation of a Major Crimes Task Force to investigate officer-involved shootings eliminates any perceived conflicts of interest because the law enforcement agency involved will not investigate itself.

"Now that you have the task force any other reason that you would recuse yourself in a case going forward?" Woodrow asked.

Unlike her last term, this time Abrams faces an opponent, her own Chief Deputy District Attorney, Sharon Henry.

"Solano County, the community there, deserves a district attorney who will make tough decisions regardless of the political consequences," said Henry.

"She was a friend of mine and now she's apparently not," said Abrams.

After working from home during the pandemic due to an underlying condition, Henry sued the county alleging discrimination and retaliation.

"I was stripped of my duties as a manager," said Henry.

She says the lawsuit is not why she's running.

"We need leadership in our office," said Henry.

A former Vallejo Police Department Captain is speaking out. Captain John Whitney claims in a new lawsuit he was fired for whistleblowing.

It may seem like a political battle, but for the victims' families it's personal.

"Why not do your own investigation?" Woodrow asked.

Abrams said if the independent investigation turns up criminal conduct she would think it would be sent to her office to review and make a decision.

She confirmed she's married to a law enforcement command staff member and she said she does not believe that's a conflict of interest.

She said she would never review something that her husband personally handled.