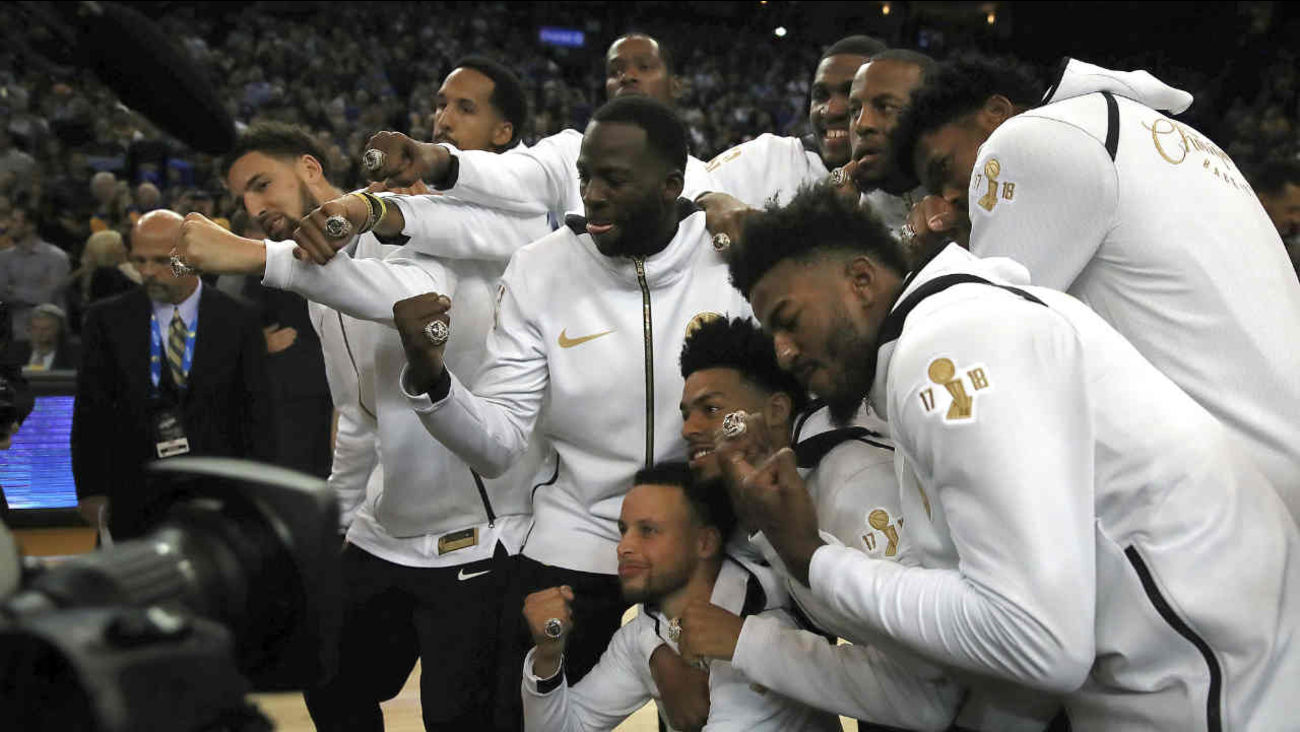 The Golden State Warriors celebrate after receiving their championship rings after a ceremony to recognize the team's NBA championship on Tuesday, Oct. 16, 2018, in Oakland, Calif. (AP Photo/Ben Margot)

Golden State needed a strong fourth quarter to win on a festive night after the two-time defending champions received their 2018 rings in a pregame ceremony shortly before tipoff and began the final season at Oracle Arena before a move across San Francisco Bay to new Chase Center.

"It's a great move for the organization. We know that but this place is special, so we want to make sure this is a special season," coach Steve Kerr said.

Klay Thompson shot just 5 of 20 for 14 points while center Damian Jones scored 12 points on 6-of-7 shooting for the Warriors in his first career start and 26th game.

Paul George scored 27 points for the Thunder, who struggled to find an offensive groove while missing star Russell Westbrook because of knee surgery last month.

Oklahoma City trailed by 10 at the break then came out of halftime making 9-of-12 shots to go ahead 69-66 before the Warriors rallied.

Versatile Warriors All-Star Draymond Green, limited during the preseason by a sore knee, wound up with two points, 13 rebounds and five assists in nearly 33 minutes. Kerr plans to monitor his minutes in the early games.

"He told me if you look tired, I'm taking you out, so, maybe I'll try to hide it," Green joked at morning shootaround.

These teams met in a season opener for the first time - though the Warriors won on the road against the Seattle SuperSonics in 1983.

Golden State lost last year's opener at Oracle after a title run, 122-121 to the Rockets.

The Warriors showed a photo of late Trail Blazers owner Paul Allen on the big screen wearing a Portland hat, offering a tribute and moment of silence. Allen, a Microsoft co-founder who also owned the Seattle Seahawks, died Monday in Seattle from complications of non-Hodgkin's lymphoma, according to his company Vulcan Inc. He was 65

Kerr encouraged fans to register to vote in a #RockTheVote message on the scoreboard, while the Warriors also did so on social media with Twitter and Facebook posts.

Players' rings - what the team said are the first reversible championship rings ever - were lowered from the rafters with blue and yellow lightsabers.

Kerr called them "obscenely beautiful" and noted he much prefers the banner raising for its significance.

At the end of the ceremony, Curry took the microphone and called out longtime equipment manager and director of team operations Eric Housen to receive his ring in a lovely gesture to someone so important to the operation behind the scenes.

Representatives from each of the franchise's championship seasons were on hand for the festivities.

Thunder: OKC started 1 for 9 missing its initial three 3-point tries and went 6 of 23 in the opening period (1 for 9 on 3s). ... The Thunder were outrebounded 57-46 but grabbed 16 on the offensive glass. ... C Steven Adams started after he had been questionable with lower back stiffness.

Warriors: Andre Iguodala experienced left calf tightness and played 10 minutes all in the first half. ... Reserve G Shaun Livingston, who had been questionable with right foot soreness, played 14 minutes. ... In a thoughtful move, the Warriors placed the three trophies from recent titles near the employee entrance so they could pose for photos before going to work. "One of the hallmarks of our organization is everybody matters, everybody is pulling in the same direction," Kerr said. ... Two-way F Alfonzo McKinnie made his Warriors debut as the first former Wisconsin-Green Bay player for Golden State. Then in the fourth, Jonas Jerebko made his debut to become the first Swedish-born player to appear for the Warriors.

Thunder: At Clippers on Friday.

Warriors: At Utah on Friday.