Who had the best sneakers of the NBA conference finals? 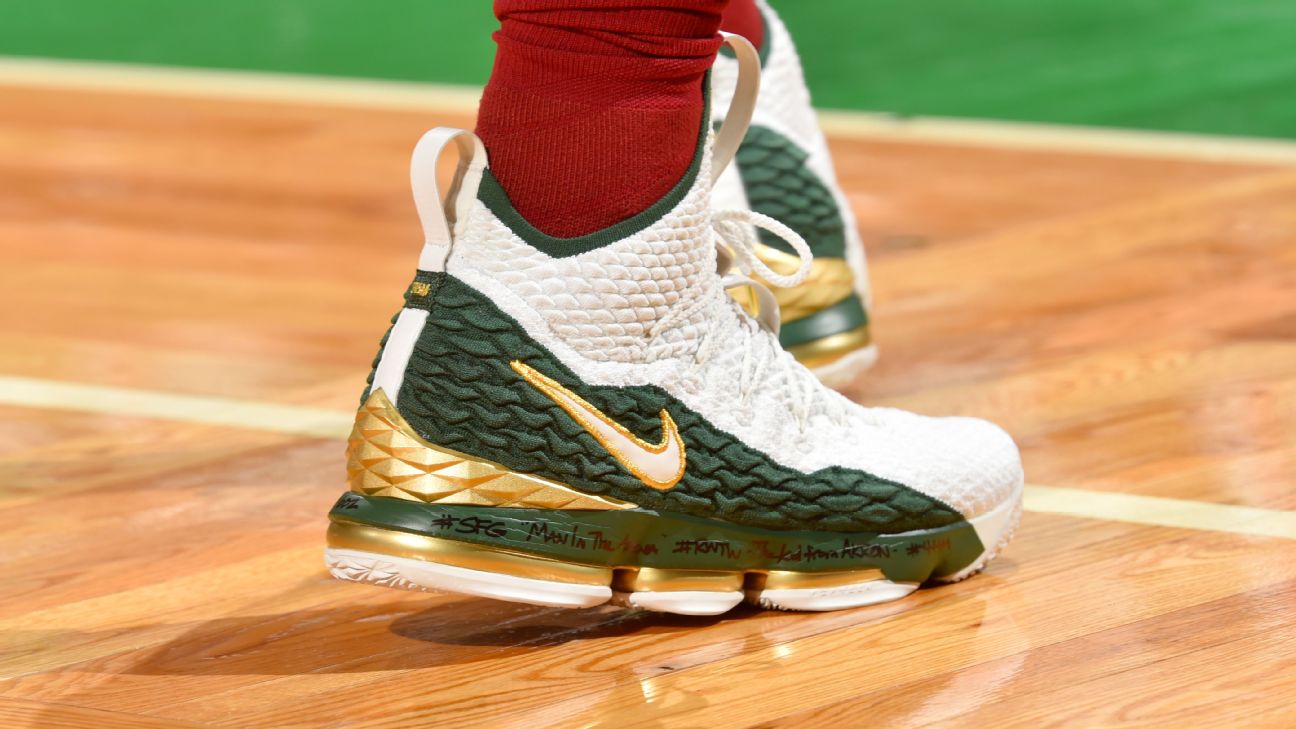 While only four teams remain in the postseason, several of the league's biggest signature shoe stars are still in the hunt for a trip to the NBA Finals.

LeBron James, facing off against the Boston Celtics in the East finals for the first time since 2012, caught everyone in TD Garden by surprise when he laced up a white, green and gold edition of his Nike LeBron 15 sneaker. While the shoe did technically celebrate the Irish, they were actually a tribute to James' Saint Vincent-Saint Mary High School back home in Akron, Ohio, complete with "SVSM" initials along the heel.

In the West finals, James Harden has continued his MVP-level play in his latest Adidas signature shoe, the creatively titled Harden Vol. 2. Designed to harness three of his signature moves, the shoes feature support and grip for his jab step, his Eurostep drive, and of course, his step-back jumper.

"He's playing more on his toes and around the forefoot, so that's where the traction pattern provides him with the most grip," said Rashad Williams, Adidas Basketball's senior director of footwear.

While Harden has rotated through a batch of Houston Rockets-friendly red variations throughout the series, the black-and-red pair he donned for Game 3 also featured gold accents along the upper, and could make a reappearance should Houston advance to the NBA Finals.

For Harden's teammate and arena hallway sidekick PJ Tucker, wearing the standard version of the much-hyped $200 "Off-White" Nike Hyperdunk 2017, designed by Virgil Abloh and now worth around $750 on the resale market, simply isn't enough.

The Rockets' 3-and-D wing took matters into his own hands to give his pair some added flair, teaming up with sneaker craftsman Dominic Chambrone, aka The Shoe Surgeon, to fully dip-dye the white sneaker into an all-red pair.

On the other side, the Golden State Warriors' trio of Kevin Durant, Stephen Curry and Nick Young each had their own unique footwear as the stakes of the playoffs heightened.

All series long, Durant has donned a pair of the KD 10 that feature a graphic combination of some of the most loved sneaker themes throughout his decade-long Nike signature series. Appropriately dubbed the "What The" KD 10, the multicolored design features elements from his breast cancer awareness tribute pairs that've honored his late Aunt Pearl, and tongue lettering from his classic Nerf basketball hoop-inspired KD 4 model.

Curry took the floor for Game 5 in an unmistakably bright pair of his new Under Armour Curry 5, forgoing the clean look of his white-based sneakers that he'd worn for most of the playoffs. The vibrant yellow-and-orange colorway takes some inspiration from Fuzzy Peaches, a gummy orange candy that he and the family are known to snack on around the house.

Last but not least, Young stole the show during Game 3 when he unearthed a pair of former teammate and close friend Gilbert Arenas' second Adidas signature shoe from 2008. An official collaboration with Japanese tableside grill restaurant Benihana, the clashing red-and-black sneakers not only celebrated the league's love for its fried rice concoctions, but also the former Wizards All-Star's famous "Hibachi!" catchphrase after made shots.

The shoes, originally limited to only 100 pairs, weren't exactly a gift from Gilbert, as Swaggy P allegedly raided the sneaker collection of his close friend (who's also a Size 13) after signing with Adidas in 2016.

"Nick has stolen a lot of shoes in his lifetime from my closet," Arenas clarified the following morning on his online show, "Out of Bounds."

Young didn't exactly scorch the nets in the true spirit of "Hibachi," shooting just 1-of-3 from the field with a pair of free throws in under 20 minutes of playing time.