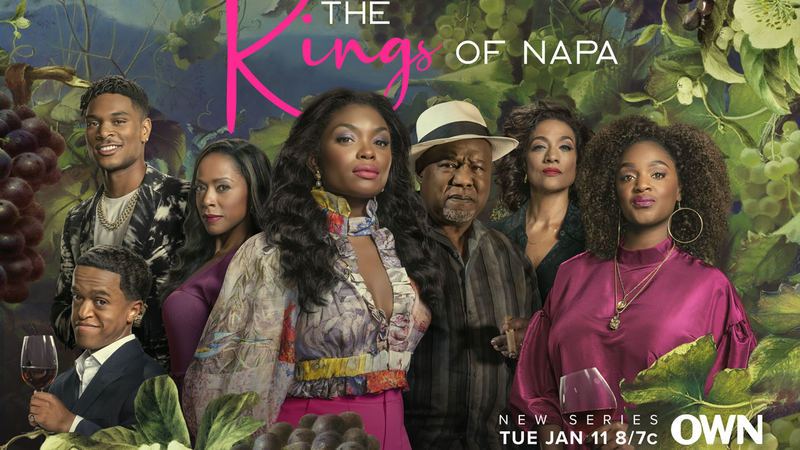 SAN FRANCISCO (KGO) -- The new scripted series "The Kings of Napa," premiering Tuesday, highlights a Black family at the helm of a successful wine business -- a rarity on the big screen and in Wine Country.

Actors on the show debuting and a local organization pushing for greater diversity in Napa Valley are hopeful the dramatic series will encourage historically marginalized groups to see themselves reflected in the winemaking industry.

"This is a show about a very affluent African American family in Napa. We have a winery called the Kings Estate," said Isiah Whitlock Jr.

Whitlock, known for his performances in Spike Lee's "Da 5 Bloods" and the transcendent HBO series "The Wire," plays Reginald King, the patriarch of the King family.

RELATED: Asian, Latinx and Black people have trouble finding therapists who look like them in the Bay Area

The show centers around the King family grappling with how to run the family business as Reginald's secrets emerge from the shadows.

"I play August King. She's very creative. She's very bold, and she has a very strong vision for not only her family's legacy but also the company and what the family could be and the heights that they can reach," said Ebonee Noel, known for "FBI" and "Wrecked."

"I think that it's important to show a family in this position, to open the door for everybody else who's watching," Noel added.

Phil Long, founder of Longevity Wines in Livermore and the president of the Association of African American Vintners, is also hopeful life will reflect art.

The mission of the AAAV is to diversify Wine Country through mentorship, scholarship, and community. Long believes the exposure from "The Kings of Napa" will go a long way.

"I think it's really important that we show that we do exist," he said, referring to Black winemakers.

In Long's estimation, less than 1% of the wine industry is owned and operated by African Americans -- a number that was even smaller when Long and his wife began making wine in their garage 15 years ago.

"What are the challenges? What are the obstacles? How can we make those smaller? How can we help increase diversity in the industry overall? That's what we're really trying to do," said Long.

While the AAAV boasts a membership of more than 50 wine business across the U.S., with the vast majority in California, the Brown Estate Vineyards is the first and only Black-owned winery in Napa Valley where the show is centered.

"It wasn't until I was in the industry when I realized just how few of us there are," he said.

Long is hoping to not only increase the number of Black winemakers, but the number of winemakers from all historically marginalized groups by empowering newcomers with support and knowledge he didn't have when jumping into the industry.

AAAV hosts a job and internship board on its website and supplies a number of scholarships to support those interested in venturing into everything in the wine industry from sommelier scholarships to business scholarships, even viticulture and enology scholarships.

Visit this page to learn more about scholarships and this page for more information about internships and job opportunities.

Laney College football was the feature of the fifth season of "Last Chance U," a Netflix series that takes you into the season of junior college football programs. Dior Scott, Nu'u Taugavau and Head Coach John Beam reacted to being on the show.