In 2019, a jury found TIffany Li not guilty of killing Keith Green, the father of her two children.
KGO
By Ed Walsh 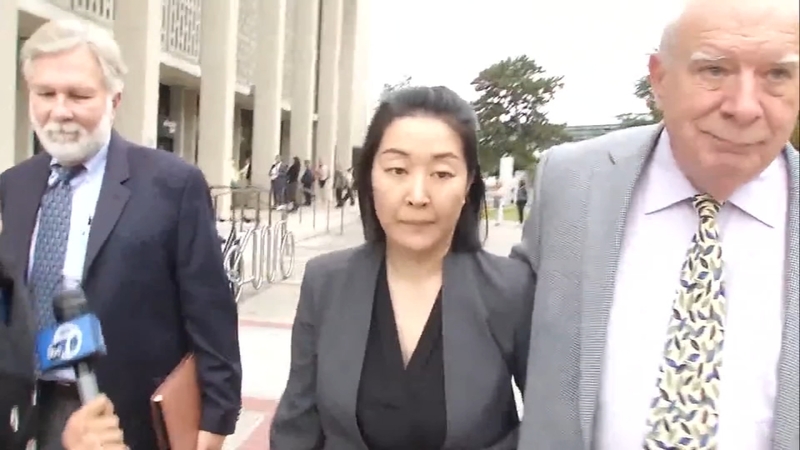 HILLSBOROUGH, Calif. (KGO) -- Hillsborough heiress Tiffany Li is giving her side of the story in court documents filed Friday. Li says she has been victimized by biased media coverage and is a victim of anti-Asian hate and xenophobia.

In 2019, a jury found Li not guilty of killing Keith Green, the father of her two children. But Green's mother, Colleen Cudd, sued her for wrongful death.

The case was settled out of court in January, but in court papers filed on Friday, Li is urging San Mateo County Superior Court Judge Danny Y. Chou to keep the settlement amount going to her two daughters secret.

Li says she is living in China with her children, aged 7 and 9, to protect them from the media's coverage of the case.

"I aimed to shield my children from the xenophobia, Asian hate, and falsehoods publicized against me that I experienced while standing trial in the criminal proceedings," wrote Li.

RELATED: How much did Tiffani Li pay in wrongful death settlement? It will likely be a decade before we know
EMBED More News Videos

It could be more than a decade before we learn how much Hillsborough heiress Tiffany Li agreed to pay to settle a wrongful death lawsuit.

As previously reported, lawyers on both sides want the settlement amount going to Li's children secret. But Judge Chou tentatively ruled against them. He says case law does not support sealing the settlement. A hearing is scheduled for April 21.

Li's lawyers also filed a declaration from Marin County-based psychologist Margaret Lee in support of sealing the settlement to protect her children.

"If the settlement details are not sealed, it seems likely that the media will again grab on to the story of the heiress, the alleged murder and then adding in that mother paid money, which no doubt would be seen as an admission of responsibility by the press," Lee wrote. "This is very likely to then expose the children to this information and given the nature of some of the press would likely expose the girls to very confusing ideas about their mother."

"Prematurely disclosing the settlement amount and the minors' trust will likely serve to add fuel to an already emotionally challenging environment for these minor children when they return to the United States," Winship wrote.

Li's attorney Jason Fellner concluded in his filing, "Because the motion is unopposed and there exists unimpeached evidence that supports the narrow sealing of court records - the settlement amount referenced between the minor plaintiffs and their mother Tiffany Li and the minors' trust - the court should exercise its discretion and grant Plaintiffs' motion to seal those records. "

When issuing his tentative decision last month in support of not sealing the settlement, Judge Chou told the lawyers that they would have the option of appealing any decision he made to an appeals court.

As previously reported, as part of the settlement Cudd would receive $100,000 and another $50,000 would go to Green's estate to pay for his burial and other expenses. But the expected much larger settlement going to Li and Green's two daughters was not publicly disclosed.

Below is Tiffany Li's complete declaration filed on March 18, 2022:

I, Tiffany Li, declare that:

2. My entire world was turned upside down after I learned that Keith Green was killed in April 2016. Keith was the father of my children with whom I shared custody of Vivienne and Nia. I loved Keith and the news of his death devastated me. I was saddened for my girls who would have to grow up without their father. Immediately, I knew that I had to do everything I could in my power to protect my children from the pain and trauma that would potentially follow from Keith's death, which I have and will continue to do for the rest of my life.

3. Despite being falsely accused and ultimately acquitted of crimes related to Keith's death, I was first incarcerated and then put under house arrest for several years from 2016 to 2019. Those years were painfully difficult for me and my girls. Between 2016 and 2019, while my criminal case was pending, my children were taken away from me and only permitted to visit with me under supervised visitation on a court ordered schedule. During this time, the United States news media published regular stories about the criminal case and called me vile and hurtful names like the "Accused Murder Mastermind", "Hillsborough Heiress", "Socialite", and "Chinese Heiress." These people did not know me but twisted their reporting to grab headlines, sell newspapers and ads, and generate revenue at my family's emotional expense, which included my children. I was the target of Asian Hate and xenophobia, spurned by sensationalized news that focused on my Asian race and family background. During my I criminal trial in 2019, I was harassed by cameras and reporters who followed me to and from the courthouse to try to get their stories to report on the news. I want to protect my children from this type of needless focus, harassment, and emotional trauma.

4. I was grateful, but not surprised, of my acquittal in November 2019 because it meant I would be free and reunited with my children. Throughout it all, I placed protecting my children from potential emotional trauma arising from the untimely death of their father as my primary concern and objective.

5. Since my acquittal and release in 2019, which came with my immediate reunification with my children as their parent and guardian, I re-located with them to China to shield them from potential emotional trauma associated with sensational news coverage of our family by the United States news media. I aimed to shield my children from the xenophobia, Asian Hate, and falsehoods publicized against me that I experienced while standing trial in the criminal proceedings. The COVID-19 pandemic arrived shortly thereafter, and we were restricted once more in our movement and travel.

6. The plaintiffs' lawyers who filed this civil lawsuit against me on my children's behalf, without my children's knowledge or consent, continued the pursuit of this wrongful death case against me even though I had been acquitted and reunified with my children. It is widely reported that I come from a family of financial means, to which my children directly benefit. No amount of money recovered in a civil lawsuit could compensate my children for the loss of their father. Despite this, the plaintiffs' lawyers pursued this case and refused to dismiss it without a settlement that paid them money. I did not want to put my children through such an emotionally traumatic process of a public civil trial if I could stop it. In the end, with the help of insurance coverage lawyers and others, I was able to meet the plaintiffs' lawyer demands and settle this case so me and my children could move on from this awful experience and stop short the emotional trauma that would likely follow if the case proceeded through trial.

7. The only thing I've agreed to with the plaintiffs' lawyers and the court-appointed Guardian ad Litem Eileen O'Brien in this case is: (1) to pay them a sum money to settle this civil case to avoid the emotional trauma a civil trial would cause for my children and (2) to keep confidential and under seal the amount of the settlement terms and contents of the minors' trust. I disagree with everything else the plaintiffs' lawyer and court appointed Guardian ad Litem Eileen O'Brien have done in connection to this civil case.

8. I want to return to the United States so my children can go back to their school and be with their friends in their community without them being faced to answer questions related to the amount of the settlement or their minors' trust that they are not mature enough to understand. The emotional trauma caused by the untimely death of their father requires me, as their mother, to protect them from future harm.

9. I have consulted with a child psychologist and a social worker who agree that the best interest of my minor children is to keep confidential the amount of the civil settlement and their trust. The reason for this protection is more than just financial privacy, it also includes their emotional well being. My children are too young to understand the circumstances or context related to the amount of the civil settlement and I worry that prematurely disclosing this information and permitting the sensational news media to publish it will result in emotional anguish for my young children and potentially disrupt the maternal bond I have worked diligently to repair since being stripped from their side between 2016 and 2019. The amount of the settlement and the contents of the minors' trust will unnecessarily fuel more sensational news coverage than the fact that a settlement was reached between the parties. The world does not need to know the amount of the civil settlement reached with the plaintiffs' lawyers when so much of my children's lives are already known and publicized. This is not fair for my children and this court should protect them from this unwanted publicity and likely emotional harm that will follow. The purpose of the civil settlement, which was to protect my children, would be defeated if the settlement terms and their minors' trust is not sealed, and instead disclosed by this court.

10. I am also concerned about my children's physical safety since Keith's killer has not been caught and there is an open and ongoing criminal investigation. The disclosure of the amount of the settlement and minors' trust will be publicized across the national press and place an unwanted spotlight on my children. This potentially puts them in physical harm by the killer and others who would see them as targets. I do not want anything bad to happen to them, which is why I am writing this declaration to support the sealing of the settlement terms and minors' trust. If this part of the case record is not sealed by this court, I am concerned that my children's emotional and physical well-being will be harmed.

11. Based on my personal observations and opinion, the settlement amount and minors' trust should be held confidential and under seal to protect my children. If this record is not sealed, then they will likely suffer further emotional harm and trauma. As of the date of this declaration, no one opposes the sealing of the settlement terms and minors' trust.

I declare under penalty of perjury under the laws of the State of California that the foregoing is true and correct and that this Declaration was executed on this 11th day of March 2022, in Beijing, China.