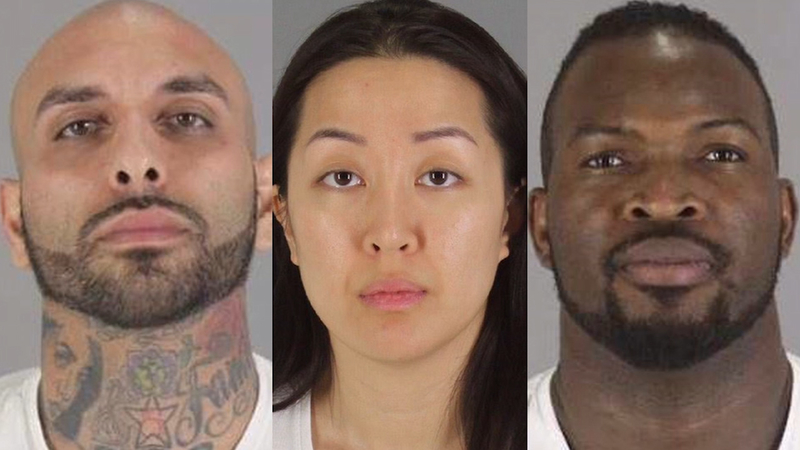 HILLSBOROUGH, Calif. (KGO) -- It was supposed to be a routine hearing Friday morning in the murder trial of Tiffany Li and Kaveh Bayat. The defense was making a second motion over cell phone evidence that was erroneously given to the jurors. Cell phone evidence was a key part of the prosecution case.

I got to court by 8:30 a.m. and sat on a bench near the courthouse door. I have been covering this case since 2016 when it was a missing persons case, before the body of the victim, Keith Green, had been found. It was my day off but I was there on my own time because I wanted to keep up on the case and wanted to be there IF anything happened.

Li's attorney May Mar walked past me and let me know about the motion. I later followed her into court and waited for the jurors to gather as I had for every day of their 12 days of deliberations. Their demeanor seemed neutral. I have seen days where they appeared more chipper and other days where they were more somber. The jurors filed into the deliberation room shortly after 9 a.m.

I made small talk with Kaveh Bayat's mother in the hallway outside the courtroom where the hearing would take place and we talked briefly about the hearing that was going to start at 9:30 a.m.

The courtroom was virtually deserted at the start of the hearing. I was the only reporter in court, to be joined later by Amy Larson of KRON-TV. Bayat's mother was also in court. Both defendants Tiffany Li and Kaveh Bayat were in attendance as well There was a delay in the hearing starting because of the time that it took Bayat to be transferred from jail and for him to change into a suit.

About 10:30 a.m., there was a flurry of activity. The judge announced that there were verdicts in the case and that the verdicts would be read at 10:50 a.m,, about 20 minutes later. Larson and I looked at each other in disbelief reassuring each other that we really did hear what we thought we heard. We had been through a number of false starts over the past three weeks of deliberations.

At least a dozen San Mateo County Sheriff Deputies quickly filled the courtroom. After alerting my boss, Assignment Editor Jim Huntington, I took a seat in the front row, about two feet from Bayat. Tiffany Li was about two feet to his left.

Family members began to arrive. Judge Robert Foiles agreed to wait a few minutes longer - until all of Li and Green's family were in attendance. After all of Li's family members including her mother were in court, the judge asked the prosecutor, Bryan Abanto, how much longer it would be before Green's mother, Colleen Cudd, would arrive in court. Abanto said about five minutes and that it would depend on (highway) 101 A few minutes later he said she just entered the courthouse.

Cudd and some of her supporters sat in the front row, three seats down from me in a seats that had been reserved for her family. She was shaking. She held a photo of her son, like she has done through the trial and pretrial hearings on the case.

The judge admonished spectators against making any outbursts in court. Bayat's mother was sobbing. Cudd held a photo of her son in her right hand and grasped the hand of a woman next to her with her left hand.

Spectators were turned away when the courtroom reached capacity. Because of the short notice the only two reporters in the courtroom when the verdicts were announced were me and Larson.

As the verdicts of not guilty were announced for Li, she at first showed no emotion but later bowed her head and began crying. Her mother and Green's mother were also crying.

Tiffany Li is bowing her head and crying as jurors found her not guilty of murder.

Judge Foiles told the jurors he had no verdicts from them on the murder and conspiracy to commit murder charges against Kaveh Bayat. The jury foreman affirmed that the panel had no verdicts on those charges. The jurors were told to continue to deliberate on Bayat.

Jurors have found Tiffany Li NOT guilty of killing Keith Green. Kaveh Bayat's fate is still up in the air. The jury will continue to deliberate on the guilt of Kaveh Bayat. @abc7newsbayarea

Larson and I quickly left court. No cameras or tape recorders are allowed anywhere in the courthouse. To do any on-camera interviews or to get any video of any of the participants, including Tiffany Li leaving, we had to be outside.

We were at the wrong exit door and missed her leaving court but another ABC7 photographer was able to get video of Li running from the cameras. I went to the law office where Li had been staying while waiting for a verdict. I walked in and she and her family were standing around in the office. Before I could talk with her, one of her investigators very politely escorted me out of the office after telling me that he appreciated that I had diligently covered the trial and had been fair.

I went back to court at 1:30 p.m. for a hearing regarding Bayat's fate. There were more reporters but fewer spectators for that hearing. Among the spectators were Green and Bayat's mothers. Li's attorneys Geoff Carr and May Mar will also in attendance. The foreman of the jury of eight women and four men said they were deadlocked 6-6 on the murder charge and 7-5 on the conspiracy charge against Bayat. The judge told the foreman to give only the breakdown of the vote, and not to say which side was in the majority or minority.

The judge set Dec. 4 as Bayat's next hearing that will eventually lead to his retrial.

Outside court, Bayat's attorney John May spoke to reporters in an impromptu press conference. As he spoke,Larson and I saw Cudd leave with her supporters. Larson asked her if she wanted to talk with us She spoke and broke down in tears as she described her disgust with the verdict. Reporters quickly gravitated from May to Cudd.

I had missed the jurors leaving the courthouse because I stayed in court after they left to hear the dispensation of Bayat's case. But I recognized an alternate juror who was standing outside. He came to the court to hear the verdict. He told me that although he didn't have the benefit of deliberations, he thought that there was not sufficient evidence in the case to find either Li or Bayat guilty of murdering Green.

I walked around downtown Redwood City to see if the jurors may have been gathered anywhere to talk. I did meet up with a juror in the place I would have gone after deliberating on that very stressful case-- a bar. The male juror politely declined comment but I gave him my card and he said he would pass along my information to other jurors. He said he expected they would get together at a later time.

This case got very personal for me at times. My mother was dying of lung cancer at the time of the trial and concentrating on the case was a relief from the constant worry. I went to visit her in Boston just before the trial started. I missed three days of the trial in October when I went back for her funeral. Several people asked me what happened to me since I had become a fixture in the trial. I told a couple of people the whole story and a couple of people I told that I needed to go to Boston on family business.

After the word filtered down through the courthouse, Li's lawyers Geoff Carr and May Mar expressed their condolences. Mar said she also wanted to extend condolences to me on behalf of Li. Although we had never spoken directly, Li knew me as the reporter who was constantly following her in and out of the courthouse with a camera. Later, Judge Foiles spoke with me outside to say that he heard that I was in Boston to cover the college cheating scandal When I told him why I was in Boston he expressed his condolences and noted that it was a good example of how stories get twisted around.
Report a correction or typo
Related topics:
hillsboroughmillbraeredwood citykeith greentrialmurderhomicide investigationhomicidecourt casetrialsabc7 originalsinvestigationmissing person
Copyright © 2022 KGO-TV. All Rights Reserved.
TOP STORIES
Watch ABC7's coverage of SF Pride Parade and Celebration
PHOTOS: San Francisco Pride Parade and Celebration 2022
No evidence of shooting at SF Pride Festival, police say
Evacuation lifted after fire burns close to homes in Albany
SF Pride Parade returns big after pandemic pause
3 dead, 2 injured after car, Amtrak train collide in Brentwood
Biden signs landmark gun measure, says 'lives will be saved'
Show More
SF's Dyke March makes celebratory yet somber return
Allies in Action: Embracing LGBTQ+ Families
SF police urge Pride attendees to remain vigilant
Trans March returns to SF after 2-year hiatus
Rep. Eric Swalwell joins abortion rights protest in East Bay
More TOP STORIES News