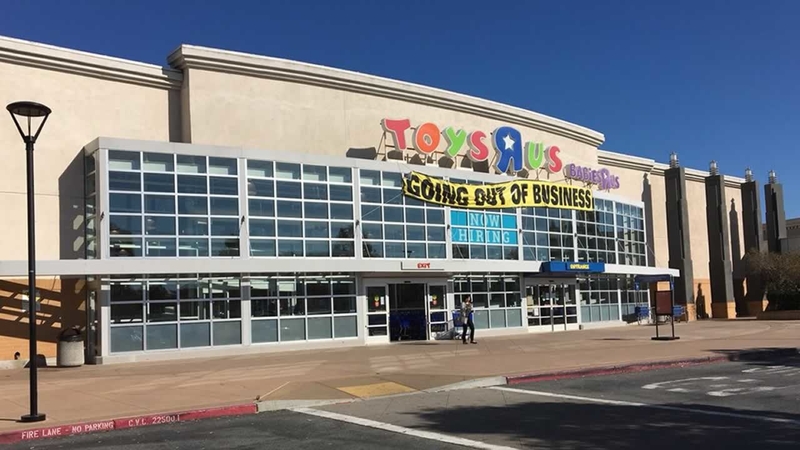 SAN MATEO, Calif. (KGO) -- The end of an era has come for generations of Toys 'R' Us shoppers. Stores closed their doors for the final time on Friday.

For more than 60 years, Toys 'R' Us has been a place where you never had to grow up. The retail giant announced it was closing all of its 800 stores earlier this year. That's why Friday's closing chapter is bringing back a lot of fond childhood memories.

"Memories of this store since I was little growing up," said Evette Purnomo of San Mateo. "It's been very emotional."

Dozens of people dropped by the San Mateo store to pay their final respects, some even snapped pictures and took selfies.

Dozens of people keep dropping by @ToysRUs in #SanMateo hoping to relive childhood memories before the toy store closes its doors for good. @abc7newsbayarea #Abc7now pic.twitter.com/KAWu6ZMivZ

By 5 p.m., it was already slim pickings as shelves were mostly empty.

Somehow, the Cardozo family of Redwood City was able to go home with not one but three kitchen sets for $15 apiece. They just had to take apart the set.

Some people like Evette Purnomo got lucky. "We actually scored and found the last two toys of the store behind the counter," she said.

Most customers left empty handed. "I didn't even make it in, I was told there was nothing left," said Amanda Bitting of Fremont.

This family was able to grab the last kitchen sets at the #SanMateo @ToysRUs. Each set was only $15. What a steal! #abc7now Other families leaving home empty handed. Store shelves are now empty! Sad 😢 @abc7newsbayarea pic.twitter.com/HqJWzBzVLI

With nothing else left at the store, some people were left to buy the remaining fixtures.

"We own a grocery store so we bought some fixtures, as sad as a day it is," said Michelle Radcliffe of Pacifica.

Now, it will only be those memories that customers will cherish.

RELATED: Everything you need to know about the Toys 'R' Us closure

End of an era: @ToysRUs closing all its stores by tonight. This one in #SanMateo is still open but there’s only empty store shelves. @abc7newsbayarea #abc7now pic.twitter.com/Zy55YbGvJi