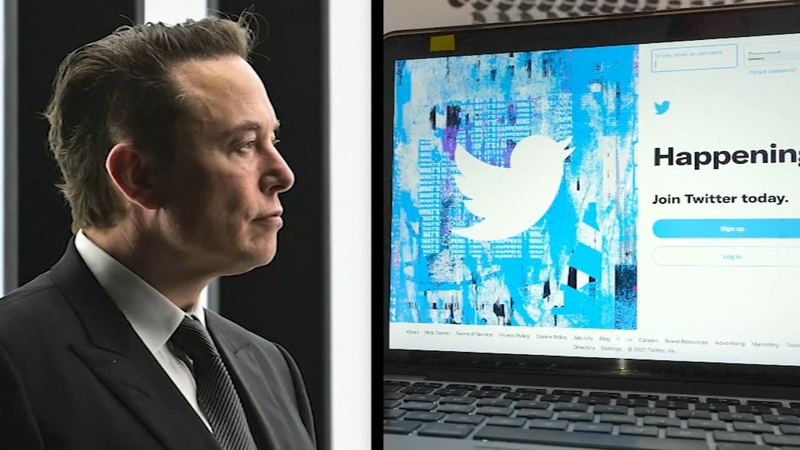 SAN FRANCISCO (KGO) -- Elon Musk the wealthiest man in the world is steps away from owning Twitter. Musk agreed to pay about $44 billion dollars to take the company private. Even after Twitter's board voted to stop Musk two weeks ago

"Elon -- when he comes in - he may clean house. Publicly he had a spat with the CEO. So there is no love loss there. The board obviously in the beginning played hard ball with him. Elon won. I don't know that they will be around either. Musk like's to have people around him that like him," said Mathew Cabot, Ph.D, associate professor of Public Relations at San Jose State University.

Musk has been critical of the social media platform for years. Citing a need for transparency and what he calls an unfair restrictions on free speech. San Jose State University associate professor, Mathew Cabot gave insight into what Musk could be facing as he gears up to make changes.

As Twitter's newest board member and largest shareholder, Elon Musk is already floating suggestions for changes he'd like to see on the platform.

"The hardest thing is going to be for Elon is to moderate the content. This is going to be tough for him because he wants to establish a platform for free speech and without it turning into a cesspool of disinformation and hate speech. He might find that's hardest to do than build cars and rockets," said Cabot.

After the agreement, Musk tweeted

"I hope that even my worst critics remain on Twitter, because that is what free speech means."

I hope that even my worst critics remain on Twitter, because that is what free speech means

"Elon is the singular solution I trust. I trust his mission to extend the light of consciousness."

In principle, I don’t believe anyone should own or run Twitter. It wants to be a public good at a protocol level, not a company. Solving for the problem of it being a company however, Elon is the singular solution I trust. I trust his mission to extend the light of consciousness.

Musk is planning to make the algorithm open source to increase trust, kicking off the bots off the site, adding an edit button as well as bringing certain banned accounts back.

"If he opens up to research and allowing those researchers to gain access to data, and to show what actually happens when we suppress this content and amplify this content. Or if we change the recommended system in this way. What actually happens to users? Some of those insights about user behavior and user experience may be translated to other platforms," said Brandie Nonnecke Ph.D, Director, CITRIS Policy Lab U.C. Berkeley.

"I don't know what types of algorithms people are going to develop. I think it can go either way. Somebody could build an algorithm that only feeds up content and reinforces their beliefs. Right, or block certain view points," said Nonnecke.

Tesla and SpaceX founder Elon Musk was set to take a seat on Twitter's board of directors, but did not. ABC7 Insider Phil Matier breaks it down.