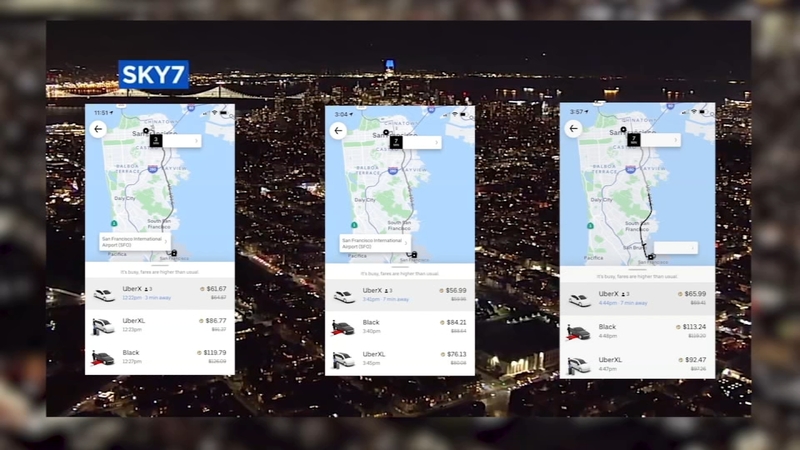 SAN FRANCISCO (KGO) -- If you rely on rideshare to get around the Bay Area or to and from the airport, you may have noticed increased prices recently.

The holiday rush is likely to include plenty of trips to and from local airports. With more people on the roads, rideshare companies like Uber and Lyft say increased demand translates to higher prices and commuters are noticing.

RELATED: Frustration among Bay Area riders as Uber, Lyft prices soar across US

"I mostly rely on Uber or public transit," said Kat Allen who lives in San Francisco and doesn't own a car.

During the pandemic, Allen says she began taking Uber more than usual.

"They typically drive with the windows down a bit too so I feel a little bit better about the ventilation," said Allen.

Recently she's noticed her trips cost nearly twice as much.

Bay Area taxi drivers say they are enjoying a surge in business as surge pricing on Lyft and Uber drives customers to look elsewhere for a ride.

Allen sent us screen grabs of rides from the Lower Pac Heights/Western Addition area to San Francisco International Airport Friday just before noon and again around 3 p.m. and just before 4 p.m., all of which said, "It's busy, fares are higher than usual."

"I'm not quite sure what's been going on," said Allen.

Uber tells ABC7 News, "We expect this to be a particularly busy holiday season and you may see elevated surge levels due to higher demand."

It's not just Uber, an ABC7 News producer captured a screengrab from Lyft last week just after 5 p.m., it showed an .8 mile trip from the Embarcadero to Nob Hill was $32.86, more if choosing an express pickup and less if choosing to wait and save.

Lyft tells ABC7 News, "As vaccines rolled out and people started moving again, we began to see the demand for rides outpace the number of available drivers."

The company says it has added thousands of drivers to the platform and expects wait times and prices to improve.

"Waiting it out usually has been my go-to strategy," said Allen.

It's one that Uber recommends to see if prices go back down. The company also recommends adding a stop and picking up a friend, then splitting the fare.

"If only it were that simple," said Allen.

Meantime, Lyft suggests their wait and save option; riders can opt to wait longer for a ride paying less, while drivers still earn the same as a standard ride.

Allen says sometimes she'll walk out of a surge area

"It was about halfway across the town that I finally got a non-surged price Uber," said Allen.

She's even considered taking cabs again though joked she's not sure how in San Francisco.

"This is probably the most millennial answer I could give you I have no idea," said Allen.

We checked a cab from Allen's neighborhood to SFO is approximately $35.

No matter how you get around in the coming weeks, everyone we spoke with agreed, plan ahead, and leave plenty of extra time.