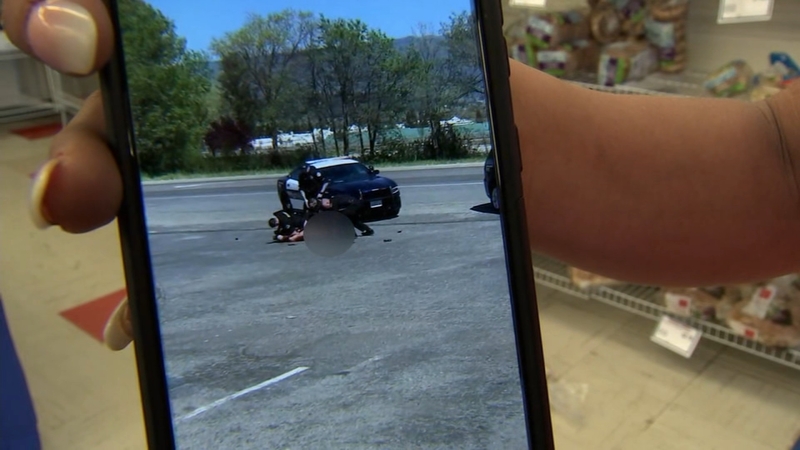 UKIAH, Calif. (KGO) -- It is the kind of video one might expect in a big city, not a relatively small town.

That is why Ukiah residents are so upset about an incident on April 1 -- and why the city announced late Monday why it is launching an independent investigation.

Videos from two angles show officers dealing with 25-year-old Gerardo Magdelano, a homeless man who had been walking naked down South State Street.

"The gentleman was not aggressive to officers. He did not advance on the officer," said Frank Pacino, who shot one of those videos.

Family members describe Magdelano as being homeless and bipolar. They say that when a local hospital refused to treat him in a crisis, he self-medicated on LSD, got hot, took off his clothes, and went for the walk, causing no problems.

Then, the Ukiah police arrived.

Video from other angles show them using pepper spray without any effect, and then a taser in trying to subdue Magdelano.

California Highway Patrol is investigating after a Fremont police officer shot and killed someone in the area of Highway 84 and Ardenwood Blvd. Wednesday afternoon.

Another video, shot by Ryan Butts and Tonya Clark, shows Ukiah police surrounding Magdelano, slamming his head to the concrete parking lot, kicking him, and hitting him in the face. "And that is when he is on the ground," said Clark. "They did not need to go any further."

"That's our little brother," said Victoria, almost in tears. "He has facial injuries. He has a concussion. He has a problem with his shoulder. And now that the drugs are wearing off, he is in pain."

Magdelano has been hospitalized two times since the incident.

ABC7 News reached out to Ukiah police for their version of what happened. They have yet to get back.

That department did release a lengthy statement. It reads, in part, "We are aware of videos circulating on-line showing a partial view of the incident... Use of force incidents like this are rare and there is an investigation underway regarding the incident's escalation and whether Ukiah Police principles and protocols were followed."

"The video does not match what my video shows of what other videos show," said Frank Pacino.

"It is a professional whitewash," responded attorney Izaak Schwaiger, who has already agreed to represent Magdelano in a civil suit. He says the city is liable because it should have trained officers to deal with such a problem.

"It is outrageous," he said. "This looks squarely like treating mental illness as if it was a crime. That's wrong."

The family told ABC7 News that they have been in touch with Ukiah Mayor Joan Orozco, who has expressed concern.

Mendocino County Supervisor Ted Williams wants to give Ukiah police the benefit of the doubt, but he has questions.

"I did not see a lot of de-escalation in the video. We do not expect that in a rural community," Williams said.

Gerardo Magdelano is at home with his family, now, recovering.