The husband went to Ukraine to visit for her 11th birthday, but because of the war was not allowed to bring her home.
KGO
By Leslie Brinkley 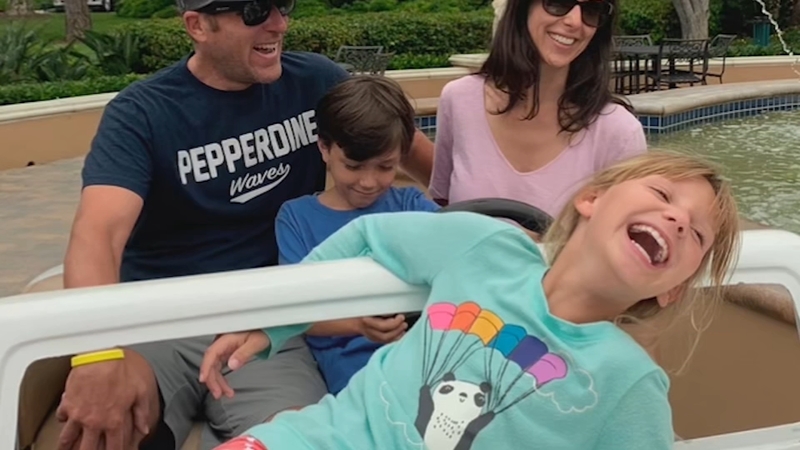 ALAMO, Calif. (KGO) -- A Bay Area family finally got approval to adopt a Ukrainian orphan, only to have the war delay it. Their little girl is among 130 orphans who took a treacherous journey out of Ukraine to safety in Germany. Her adoptive dad flew there to see her and hug her.

Ukrainian orphan Sveta was 8-years-old when she first spent the summer in 2019 with the Callahan family in Alamo, California.

"She gave him the biggest hug and the tears just started flowing and Chris turned to me and said 'what have you done? This girl!'" Gina Callahan said.

"You fell in love with her?" ABC7 News asked.

"Right away. She was just a spitfire," Gina said.

Bay Area nonprofit Transform a Street Dog has saved hundreds of dogs from Ukraine, and has no plans of stopping.

So they started the international adoption process. There was a pandemic. And then good news as 2022 dawned.

The adoptive mom said, "January on the 17th actually, we were approved and were excited for about an hour. We heard that Russia was pulling it's representatives out of the Ukrainian embassy and we both thought 'this is not good. What is happening?' And it just went downhill from there."

As the first shots were fired, the orphanage director loaded 130 children onto school busses, and in a dangerous convoy. got them out of Ukraine on February 25, Sveta among them.

Gina Callaghan said, "It was probably one of the worst couple weeks of my life wondering where this girl was, where was she headed, are we going to lose track of her?"

She ended up at a hostel in Germany. Chris Callahan jumped on the first flight he could get and managed to find the compound. He showed his adoption paperwork and wiped tears when he finally saw her.

It was Sveta's 11th birthday.

"Here we have a child of ours fleeing a country that's under war now and to physically see her and to see her safe, that was comfort," Chris Callahan said.

He stayed for three weeks, but with the Ukrainian government freezing adoptions, he came home to California without her, saying it was very hard to leave.

Gina Callahan choked back tears as she said, "I know she's gone through a lot of trauma and it's kinda a helpless feeling."

They're now lobbying to the state department and President Biden, along with 200 other families, to get special US visas for the children to come to stay with their adoptive families temporarily and then must get Ukrainian approval. Meanwhile they talk to Sveta everyday.

Callahan said, "Every time she calls she asks 'will you take me to my room?' So we take her to her room and make sure nothing's been moved. Everything is still there. Her toys, her stuffed animals, everything is there. We'll get her here."