Olga Korol is stuck in Germany with her infant son while desperately searching for a way to get to family in San Jose.
KGO
By Amanda del Castillo 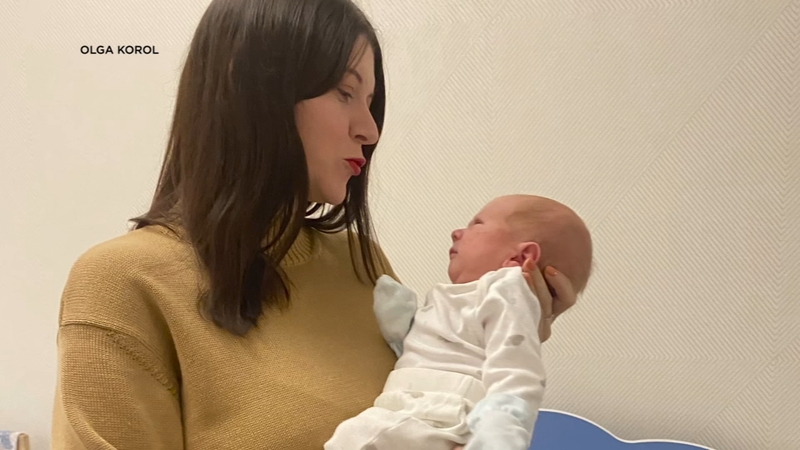 "He is trying to make some intonation, grab things, "Korol told ABC7 News about the little boy. "Now he can hold a toy in his hands."

From Germany, she explained her family left their home in Kiev in early March. She said they traveled to meet her parents in Khmelnytskyi, in the western part of the country.

In their escape, Korol recalls often hearing sirens blaring. She said at one point, the family was forced into a shelter that she said was freezing and unfit for an infant.

"And the air is not okay for him," she added.

As Russia's armed invasion grew more destructive and deadly, Korol said she and her husband remained focused on Severin's safety.

"It's too scary for the baby's life to stay. And that's the reason we do all this," she shared. "This seems, because when you can't do anything, and you have to think of baby."

She knew they had to leave Ukraine and planned to reach family here in the Bay Area.

"Only possible way to leave the country is by bus, which took us almost 20 hours," she said. "We spent from eight to 10 hours at a border control on our bus. Only women and kids were there."

Korol's husband and her father stayed behind. She, Severin and her mother then flew from Poland to Frankfurt, Germany almost without issue.

She said the airline lost her luggage.

"Can you imagine it? I didn't have toothpaste, I didn't have my underwear. What I was wearing was on me and that's it. And also, we lost a lot of stuff (for the) baby," Korol added.

Their final destination was set for San Francisco.

However, they never made it on that connecting flight to SFO. Instead, their itinerary was impacted without necessary travel documents for little Severin.

"He only has a birth certificate and he doesn't have a passport," Korol said. "I applied in Kiev for passport, but then Russia started to bomb our city. Of course, foreign passport is not possible to be received."

Currently, Ukrainian Embassies and Consulates cannot issue new passports. The Consulate General of Ukraine in San Francisco, Dmytro Kushneruk, confirmed the Ministry of Foreign Affairs- in the case of a baby without passport- has allowed the infant to be included on a parent's passport with a photo.

Korol said she's completed that step, meaning Severin's passport is now a page inside of hers.

"On the U.S. side, he did not have a valid visa," Korol's cousin, Lena Tutko, told ABC7 News. "And in order for him to get that visa to travel to the U.S., he needs to have a passport. In Frankfurt, him being written into his mom's passport was not sufficient."

Tutko lives in San Jose, and is part of Korol's family in the Bay Area that has spent the last two weeks reaching out to lawmakers and others for assistance.

Tutko put up an online campaign to help cover Korol's hotels, Airbnb's and other expenses, as she's seemingly stuck in a foreign country.

In an e-mail, Kushneruk confirmed, "To go to U.S. everyone needs the visa, but this is the procedure with US Embassy or US Consulate in Frankfurt."

Part of moving forward for Korol would be providing the passport she has now.

"Then we have another problem. I have to put, you know, into the boxes... documents. But I didn't put my passport because it was too risky. It's the only document," Korol said.

A shelter in Poland is rescuing injured animals from war-torn Ukraine like Moon, a German shepherd who was found severely dehydrated.

Tutko elaborated, "She didn't feel comfortable dropping off her passport- her only form of documentation - into some slot somewhere in Germany, and then being without any documentation."

Worry, when Korol should be enjoying the first few months of motherhood.

Korol said she doesn't want to apply for refugee status, saying it feels too permanent.

She hopes to one day return back to her country, back to the family's home, and back to her husband.

"I miss him every day. He's now in terroristic defense. And I'm afraid. I'm afraid, you know, because I didn't want to think about it," Korol said. "I tried to concentrate on this baby and just bring good vibes to him because he feels everything."

For a link to the GoFundMe campaign, click here.