Aaron Starr's path to safety wasn't easy, now he and his family members back home are trying to help in the humanitarian crisis.
KGO
By Cornell Barnard 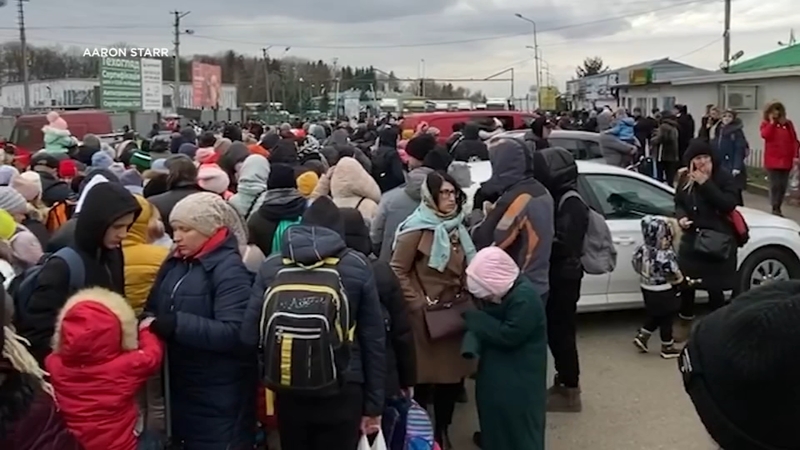 SAN FRANCISCO (KGO) -- A Napa Valley man living in Kyiv has become one of the millions of refugees that have fled Ukraine after the Russian invasion.

Aaron Starr's path to safety wasn't easy, now he and his family members back home are trying to help in the humanitarian crisis.

25-year-old Starr spoke with ABC7 News Monday from a safe location in Warsaw, Poland after a long week trying to escape his home in Kyiv with his girlfriend Anna.

"The whole car ride we were reading the news to see where the Russian troops were bombing and advancing," said Starr.

RELATED: As more than 1 million flee, thousands from Bay Area look to head to Ukraine to fight

Starr works for a Ukrainian tech company, he grew up in Yountville. He is a 2014 graduate of Vintage High School. But he never imaged, becoming a refugee caught in the middle of a war.

Starr says the journey to Poland took almost 30 hours. He captured video of thousands of refugees forced to make the trek on foot. Once at the border, there was a sea of humanity waiting to cross. Starr is now using his tech connections to help the war effort.

"We're trying to tell clients 'hey this is a hard time for Ukraine, if you have operations in Russia, please discontinue them,'" he said.

Back home, his mom Debbie is trying to help friends in Ukraine where relief supplies have been slow to arrive.

"All I can think of is not the aid but writing our elected officials, I feel as a Jewish person this is like watching another massive tragedy where we're taking too long to do more," said Debbie Alter-Starr.

Starr family friend Victoria Stepanenko from Ukraine is pausing her California college career to help friends and family back home, many are now fighting or need shelter.

"We've been trying to find places for families to stay in Poland, someone needed medicine and we managed to arrange it, knowing I'm doing something keeps me sane," said Stepanenko.

A Wine Country community pitching in while fearing for the future of Ukraine.