One woman barely made it out alive. The train station she left from in Ukraine was bombed minutes after her departure.
KGO
By Cornell W. Barnard 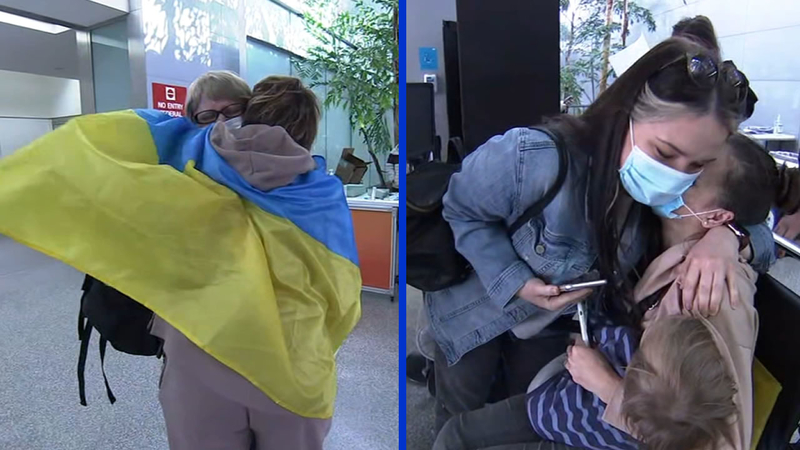 CASTRO VALLEY, Calif. (KGO) -- We're seeing the first refugees from war-torn Ukraine arrive in the Bay Area. For many, the journey to California is bittersweet after leaving friends, family and their lives behind.

In an emotional reunion at SFO, Polina Prokopiak and her 1-year-old son Artern, arrive exhausted after a long journey escaping their beloved country.

"It's very scary in Ukraine with a lot bombing, I was worried for my son. that's why we came to the U.S.," said Prokopiak speaking through a translator.

Polina documented the tragic scene at the border of Maldova, long lines of refugees stretching more than ten miles.

Minutes earlier, another reunion was happening.

Bohdana Korchak from San Jose was greeting her mom Vira, who arrived in San Francisco from Ukraine with only a small suitcase and is now a refugee.

"No house, no town, no dog, nothing," said Vira Havryliuk.

Korchak said her mom has been been taking cover for days in her own basement, turned bomb shelter.

Nonprofits are gearing up to help Ukrainian refugees entering the Bay Area amid the war between Ukraine and Russia.

The train station she left from in Ukraine was bombed minutes after her departure.

Vira's message to Russian President Putin: "Putin is a maniac."

"It was hard to convince my mom to leave, she was scared," said daughter Bohdana Korchak.

RELATED: As more than 1 million flee, thousands from Bay Area look to head to Ukraine to fight

Nearly one million refugees have already fled Ukraine, about the population of San Jose.

These Ukrainian relatives hope to apply for refugee status allowing them to stay in the U.S.