While it's unclear how many Ukrainians will be coming to the Bay Area, it is clear that housing will be a challenge.
KGO
By Tara Campbell 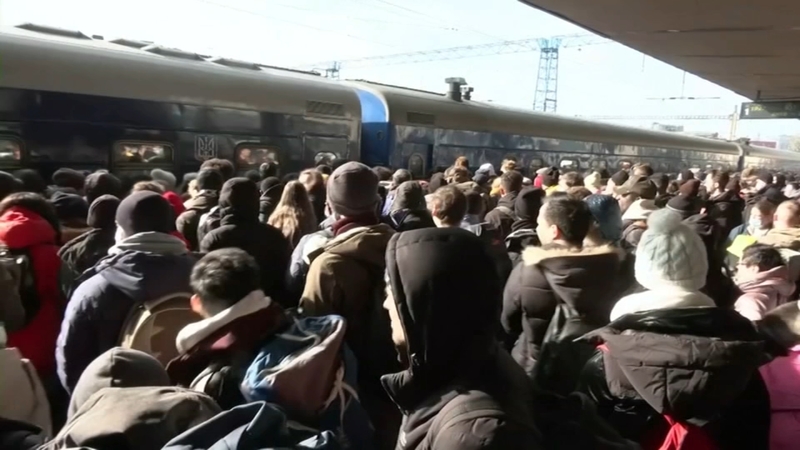 As thousands flee from Ukraine, Bay Area prepares for refugees

SAN FRANCISCO (KGO) -- As hundreds of thousands Ukrainians flee their country, a call to action as local nonprofits prepare to welcome those landing in the Bay Area.

"We will be ready because we need to be ready," said Jane Pak, Co-Executive Director, Refugee and Immigrant Transitions.

As night falls and Russian forces continue to press through major Ukrainian centers, civilians are arming themselves to protect their cities.

"The dismantling, if you will, of a lot of the resettlement agencies under the last administration - organizations have been overwhelmed," said Pak, noting volunteers have been stepping up to help fill the void.

"We've had an amazing, amazing turnout and outpouring of support from volunteers and so forth," said Pak, adding as Ukrainians seek refuge in the area, volunteers will continue to be key.

"It's very important that we get people rallied behind this in a timely fashion and prepare for the influx that's to come," said Monica Polissky, a volunteer with Nova Ukraine - a nonprofit helping to organize volunteers.

"We anticipate having a need for helping these families adjust to life in the United States," said Polissky. "This can be anything from getting a driver's license, to getting your kids enrolled in school."

While it's unclear how many Ukrainians will be coming to the Bay Area, it is clear that housing will be a challenge.

RELATED: Local and national support for people in Ukraine

"We might have children who are orphaned by this war so if you can offer any sort of housing to families, or orphaned children that's another thing we're looking into. So please reach out," said Pollisky, adding for those who can't give of their time to consider making a donation.

NOVA Ukraine is fundraising on its website as well as its Facebook page. "The goal is $2 million and as five minutes ago I checked and we were almost at $1.5 million, so please feel free to donate there."

The nonprofit says if you would like to volunteer, you can email Monica Polissky at monica.polissky@novaukraine.org .