Clock ticking down on Ukrainians seeking refuge at US-Mexico border

Starting April 25, Ukrainians seeking asylum at the southern border will need a financial sponsor in the U.S. as a citizen or NGO
KGO
By Tara Campbell 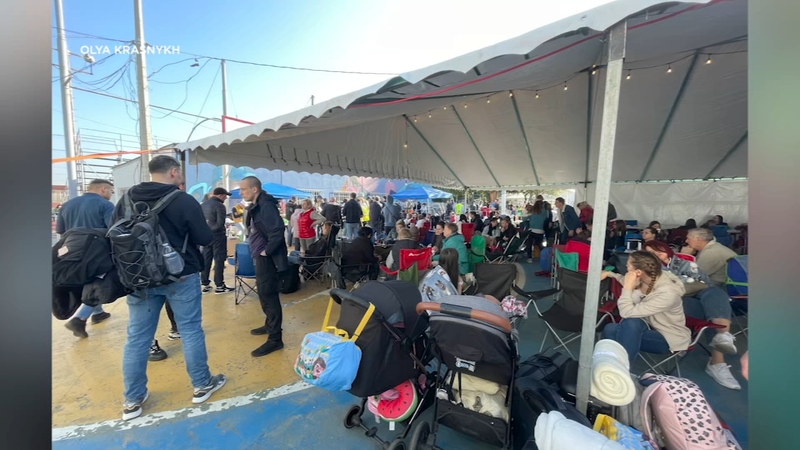 Clock ticking down on Ukrainians seeking refuge at US-Mexico border

SAN FRANCISCO (KGO) -- And as war intensifies in Ukraine, the U.S. is expecting to welcome up to a 100,000 refugees. So far the majority of evacuees have entered through the southern border, but as of Monday that's going to get a lot more difficult.

Thousands of people fleeing the war-torn country have been landing in Tijuana, Mexico waiting to cross the border into the U.S. Volunteers are on the ground helping to provide everything from transportation and translations to food and shelter.

Redwood City resident Olya Krasnykh - has been in Tijuana for several weeks and spoke with ABC7 News shortly upon her arrival.

"It's never-ending chasing our tail trying to make sure these people have a place to sleep that's decently safe," she said.

So far about 15,000 Ukrainian refugees have arrived in the United State with the majority coming through the southern border.

"The convenient side of the Mexico route is a number of people were let in," said Igor Markov, a director with Nova Ukraine, a Palo Alto based nonprofit.

But come April 25, it's going to much harder for those seeking refugee at the U.S.-Mexico border. That's when a new program streamlining applications for Ukrainian refugees goes into effect- it's also when officials will start turning evacuees away at the southern border.

"They had to wait but in terms of paperwork and requirements- it wasn't as rigorous as the new system," said Markov.

The new system requires Ukrainian refugees to have a financial sponsor in the U.S. as a citizen or NGO who can house and support them.

"I imagine people with relatives in the U.S. will have no difficulty with that, but of course those who don't have anyone in the U.S. this will be insurmountable obstacle for them," said Markov, noting the new program making it easier to enter the U.S. directly for Europe is much better option than the Southern Border.

"It was more lenient, but we didn't think it was sustainable," said Markov. "Tijuana isn't the most secure city."

For those interested in sponsoring a Ukrainian family a place to start is Welcome.US. The nonprofit has launched an initiative to sign-up 100,000 sponsors. Visit here for more info.