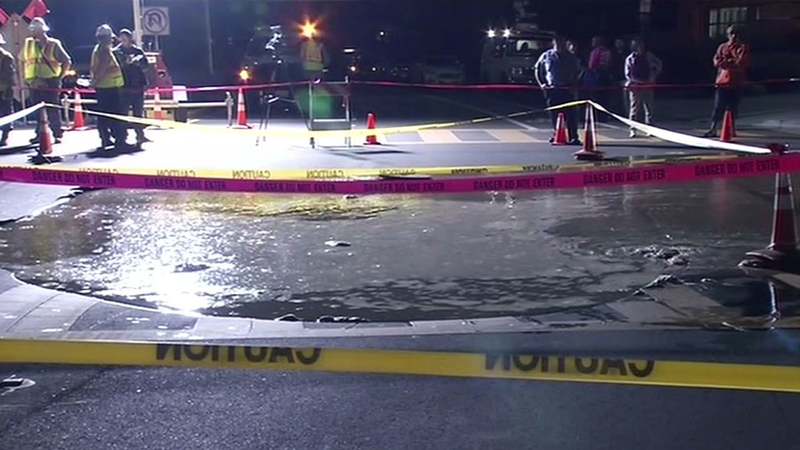 UNION CITY, Calif. (KGO) -- First a sinkhole opened up in the East Bay and then water started mysteriously gushing into the hole, swallowing up part of the street.

The sinkhole developed early Wednesday afternoon on Alvarado Boulevard and New Haven Street in Union City and crews are working to patch up the problem.

It's still unclear why the sinkhole developed. The water was everywhere, bubbling up from the middle of the once busy intersection, creating a lake at Alvarado Boulevard.

The source of the water remains a mystery. It began when a sinkhole about 10 feet by 12 feet wide, developed around 2 p.m. Wednesday. No one could say how deep the hole was. The intersection was quickly closed to traffic.

Hours later water began filling the sinkhole, overflowing down the street. Crews jackhammered into the asphalt to find a source of the leak, possibly a ruptured water pipe nearby.

"It's crazy. It could happen in our house," said one resident.

Others were just trying to get home around the chaos.

"It's very hard to get home. There's a lot of traffic. there's a lot of attention. People are being a little crazy, but not too crazy," said Gabriel Sanchez, a Union City resident.

Nearby Alvarado Middle School expects pick and up and drop-off of students to be impacted by the road closure. Alternative transportation is advised.