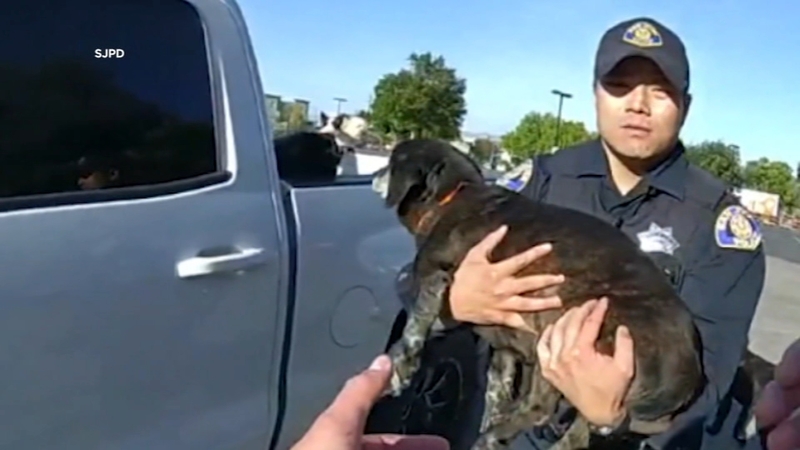 SAN JOSE, Calif. (KGO) -- Fire investigators in San Jose are working to figure out what caused this weekend's five-alarm fire that destroyed the Home Depot on Blossom Hill Road.

Fortunately, no injuries have been reported at the Home Depot or the neighboring veterinary hospital and pet campus.

On Monday, San Jose Police (SJPD) shared a new view of Saturday's rescue mission. As the massive fire tore through Home Depot, stills from officer body worn cameras captured what it took to save dozens of pets from Wagly. The business is located just next door.

"I definitely was traumatized, not him," dog owner Corey Dodgson said about her 9-month-old malti-poo named Archie. Saturday happened to be Archie's first trial run for overnight boarding.

Some residents are returning home after a massive fire destroyed a Home Depot in San Jose over the weekend.

Hours after dropping him off, Dodgson found herself rushing back to the area with smoke billowing from the neighboring building.

"We stepped outside and there was a massive amount of smoke- and we're about 5-miles away from the Home Depot," Dodgson told ABC7 News. "I immediately grabbed his harness and leash thinking, well maybe I'll be able to get him. Got on 85 and saw just the plumes of smoke and immediately thought, I am not gonna be able to get him."

Thanks to social media, she learned all animals had been evacuated.

"I was more than relieved to hear that all dogs were put into vans- employee's cars, cops cars- they literally just chucked them into cars and got them out of there," she continued.

Dodgson explained she was confident Wagly staff would be able to evacuate all of the pets inside, commenting on the level of care she's experienced. She noted that collars and harnesses are typically removed from the dogs when they enter Wagly for safety reasons.

She added, "My biggest fear was that he's going to end up getting loose and he doesn't have a tag on him. And that he was gonna be running around and dodging cars and things like that."

On Saturday, many owners were sent to nearby Golfland, where many were reunited with their dogs.

Over the phone, ABC7 News connected with the owner of 8-year-old Kiki. She is a 26lbs Cocker Spaniel-Terrier mix.

Kiki's humans were heading back into the city, spotting the smoke miles away.

"My wife said, 'Oh my gosh, Home Depot's on fire.' It's like, 'Oh, nuts! You know, that's part of the complex that Wagly is at,'" Jann Fabrin said. "So we floored it. We got off at Santa Teresa and we got as close as we could."

He explained Kiki was nowhere to be found at Golfland.

"Finally at 10 o'clock, they said, 'Oh, yeah, she was delivered to the Campbell MedVet about 30 minutes ago, a little before 10," Fabrin told ABC7 News. "So we zipped on over there, she was checked out for smoke inhalation and was okay."

He said the family was finally reunited at around 11 p.m.

"It was just an unfortunate circumstance and, you know, in hindsight, Wagly and other corporations probably have to have a really good emergency plan- when things are going crazy- to make sure everything's accounted for," Fabrin added.

As of Monday afternoon, the city said seven dogs and one cat remain at the San Jose Animal Care Center.

"My saving grace on this trip was that it was a trial, and that I was in town," Dodgson said. "And that I wasn't across the United States, you know? Or you know, some people were on their honeymoon in another country."

ABC7 News reached out to Wagly, but did not hear back.

The Wagly website says the location on Blossom Hill Road remains temporarily closed because of damage by the neighboring fire.