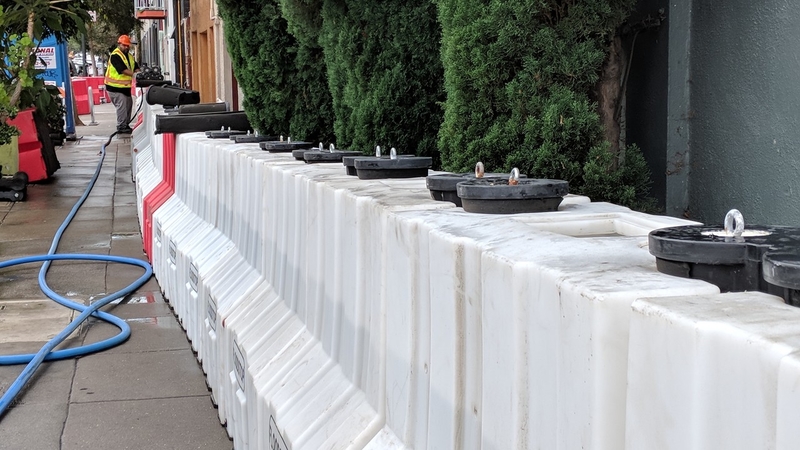 SAN FRANCISCO (KGO) -- A San Francisco Mission District spot that has flooded with every rainstorm for decades got some extra help from the city's water department ahead of the season's first major rainstorm.

Red and white plastic barriers that snap together like Lego bricks form a wall around the homes and businesses at 17th and Folsom Streets. It's an inconvenience for folks trying to get in and out, but those who've been here for years say the alternative is far worse.

"These are temporary plastic flood barriers that interlock to seal out stormwater during times of wet weather," explained the San Francisco Public Utilities Commission's Tyler Gamble, as workers behind him filled the lightweight plastic blocks with water from a nearby fire hydrant.

Though the barriers are light enough to lift with one hand, they weigh over 400 pounds each once they're full. You might say the workers are fighting water with water.

Residents and business owners on this block know of its infamous history -- and many have lived through it.

The auto body shop at 17th and Folsom showed us this photo from flooding in 2004. Cars were totalled as water poured in. They raised their parking lot and put their computers up on risers after this. pic.twitter.com/LFH6qNlvh7

Three years ago, a washer and dryer were among the casualties of flooding on the ground floor of an apartment building around the corner. That storm forced the SFPUC to start looking at new, creative options like the plastic barriers.

"It was a really innovative tool, we were the first in the country to really roll these out," Gamble said.

But the owner of Hans Art Automotive insists the plastic barriers, called FloodStop, are merely a stopgap.

City crews will staff these flood control barriers 24/7 as long as they're out here at 17th & Folsom -- opening and closing them as needed. pic.twitter.com/tcdugILD7L

"It's not a flood. Wrong word. It's a sewer backup," said Hans Art, who's lost track of how many times reporters have interviewed him about flooding during his 47 years in the neighborhood.

When it rains, Art says the water that pours into his shop, ruining cars and computers, isn't all from the sky. Some of it even bubbles out of his own toilet.

"We get a four foot geyser out of the manholes, and stuff like that," Art said.

The SFPUC is in the middle of a citywide sewer modernization process that will take years to complete. In the meantime, they're offering grants to property owners for floodproofing projects. Art received one to elevate his parking lot, keeping water from running off into the businesses behind him like The Stable Cafe, which once had to close down its kitchen for months after a damaging flood.

The grants and plastic barriers are part of a newly-branded SFPUC program called Rain Ready SF, which also includes initiatives like "Adopt-a-Drain," giving neighbors tools to clean out storm drains before flooding starts.