SAN FRANCISCO (KGO) -- More than 3,000 people participated in 49 minutes of civil disobedience in San Francisco early Friday evening to mark the 49 years since the landmark decision of Roe v. Wade and the end of constitutional protections for abortion on this day that had been in place since 1973.

Protesters participating in a rally that began at 5 p.m. at the Philip Burton Federal Building, followed by a march to Market Street, where a sit-in began at the intersection with Hyde Street.

There, 49 minutes of civil disobedience commenced to protest Friday's decision by the U.S. Supreme Court to overturn Roe v. Wade.

Following the culmination of those 49 minutes, protesters began marching east on Market Street toward The Embarcadero where the rally is expected to wind up at the Ferry Building.

The California Highway Patrol says around 6:45 p.m. demonstrators made their way onto Highway 101 at the Octavia Street entrance. Officers were able to guide the 200 to 300 protesters off the freeway and back onto city streets.

Outside of city hall, Karen Ande says she remembers the time before Roe vs. Wade, and is shocked the country's laws are now returning to that period.

Several political leaders were also out in force.

Many, including State Senator Scott Wiener and Assemblymember Matt Haney attended a rally set up by Planned Parenthood. 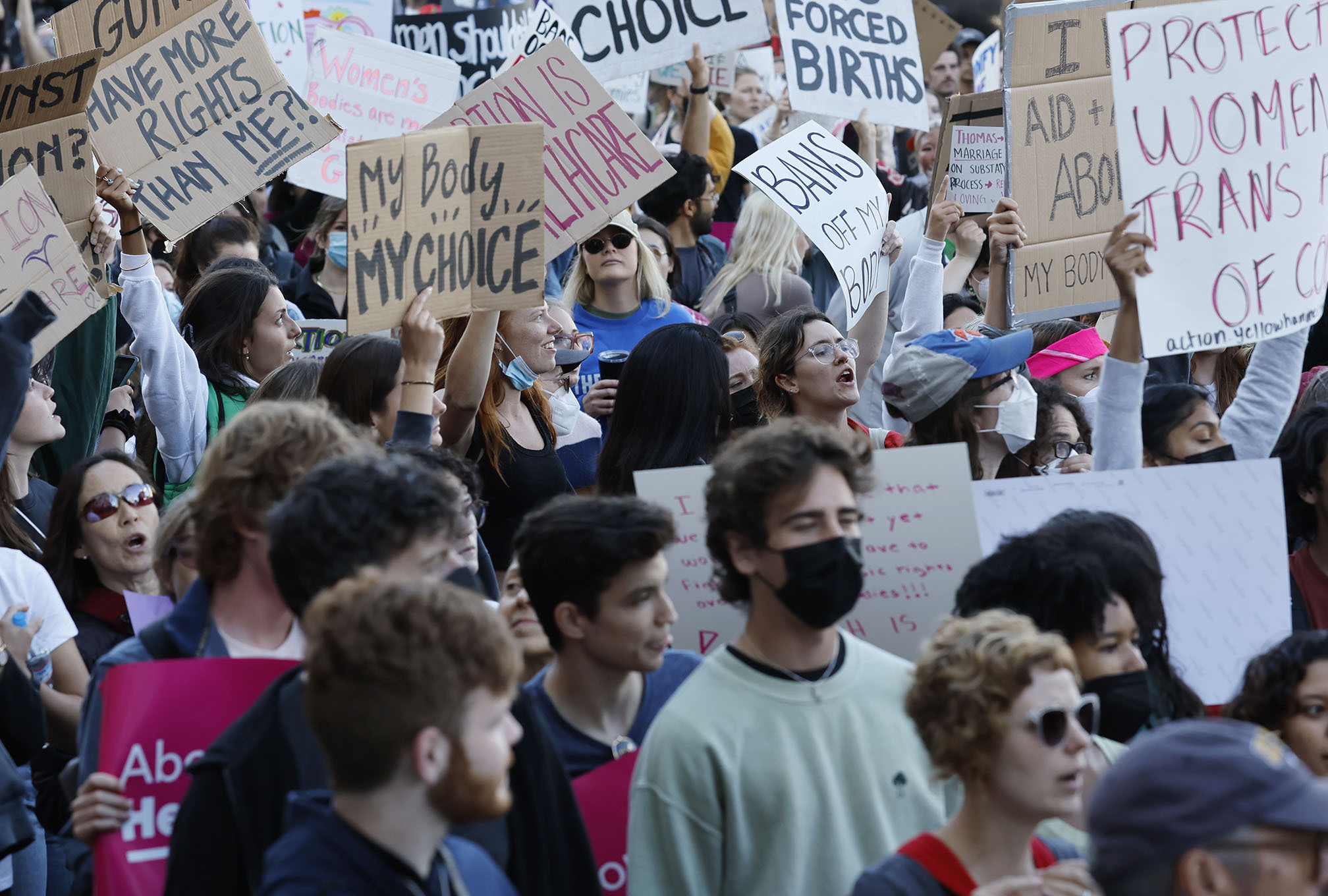 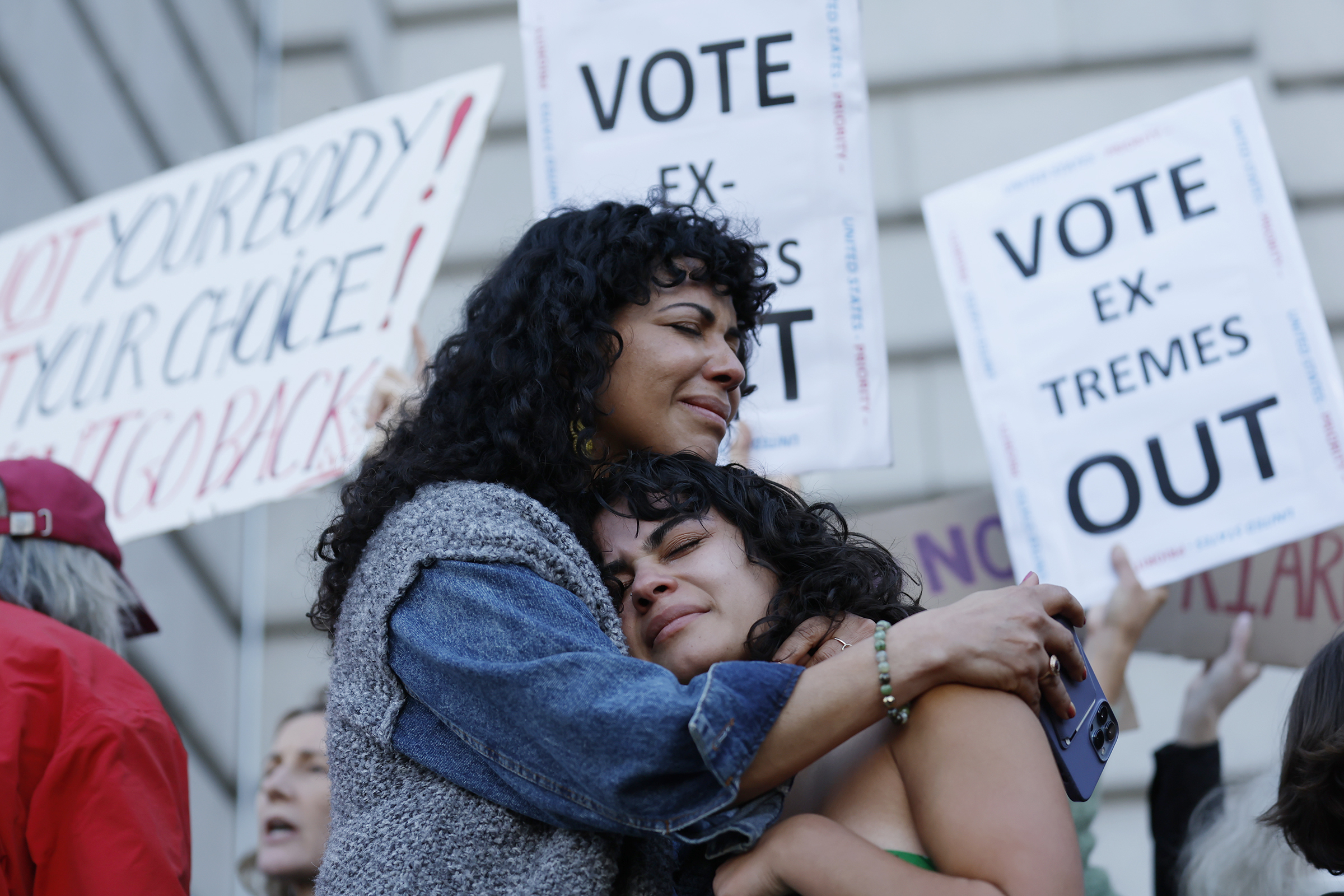 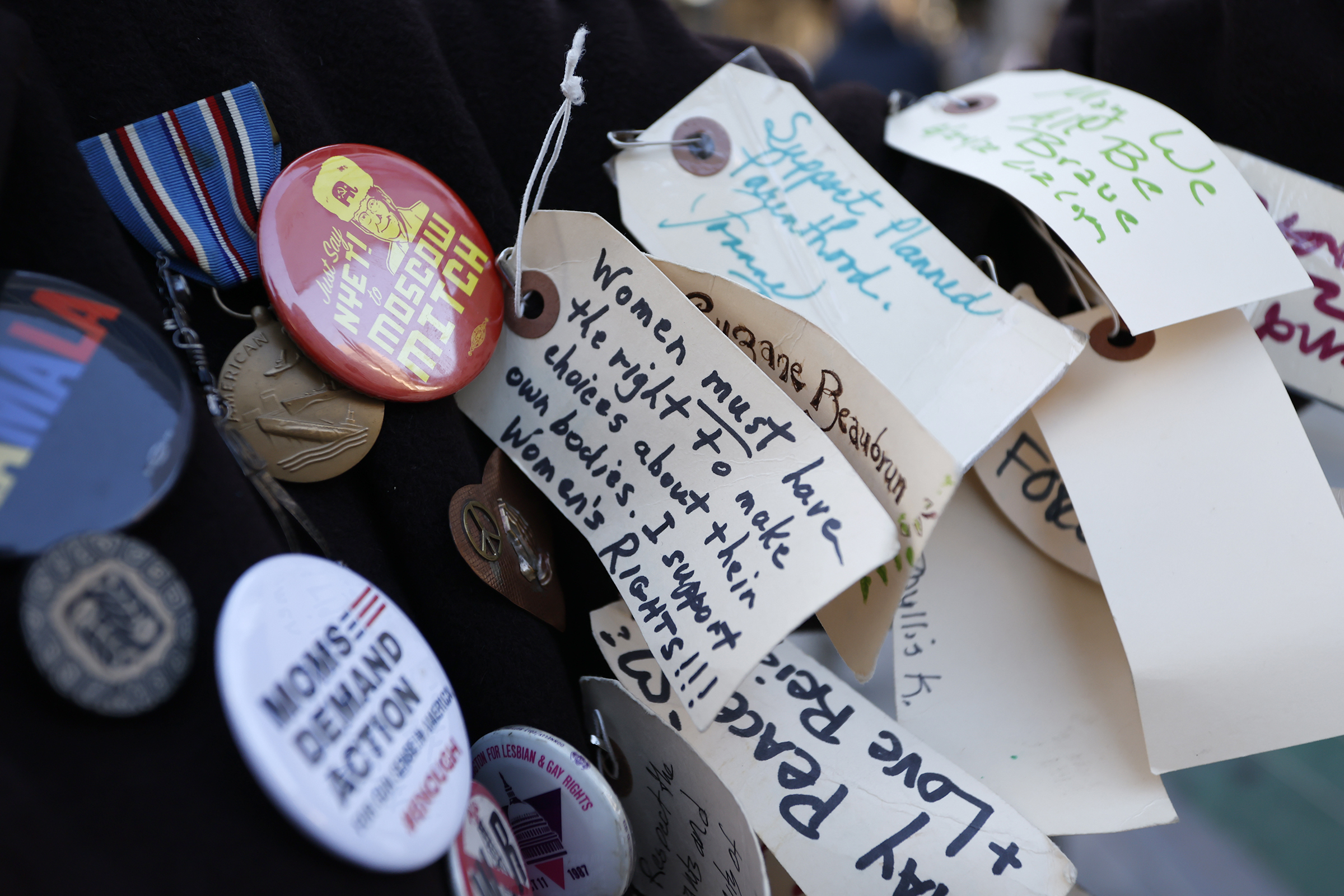 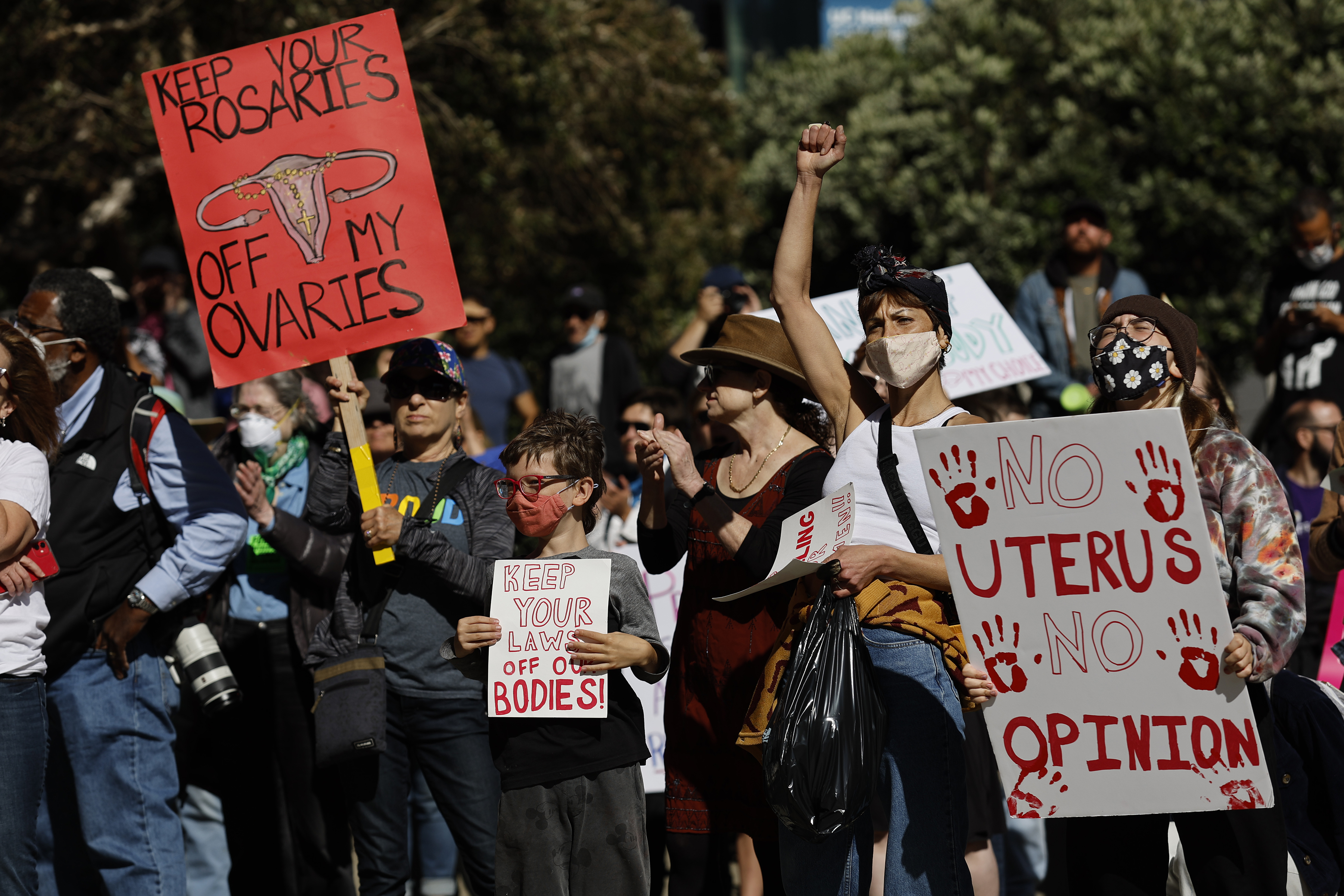 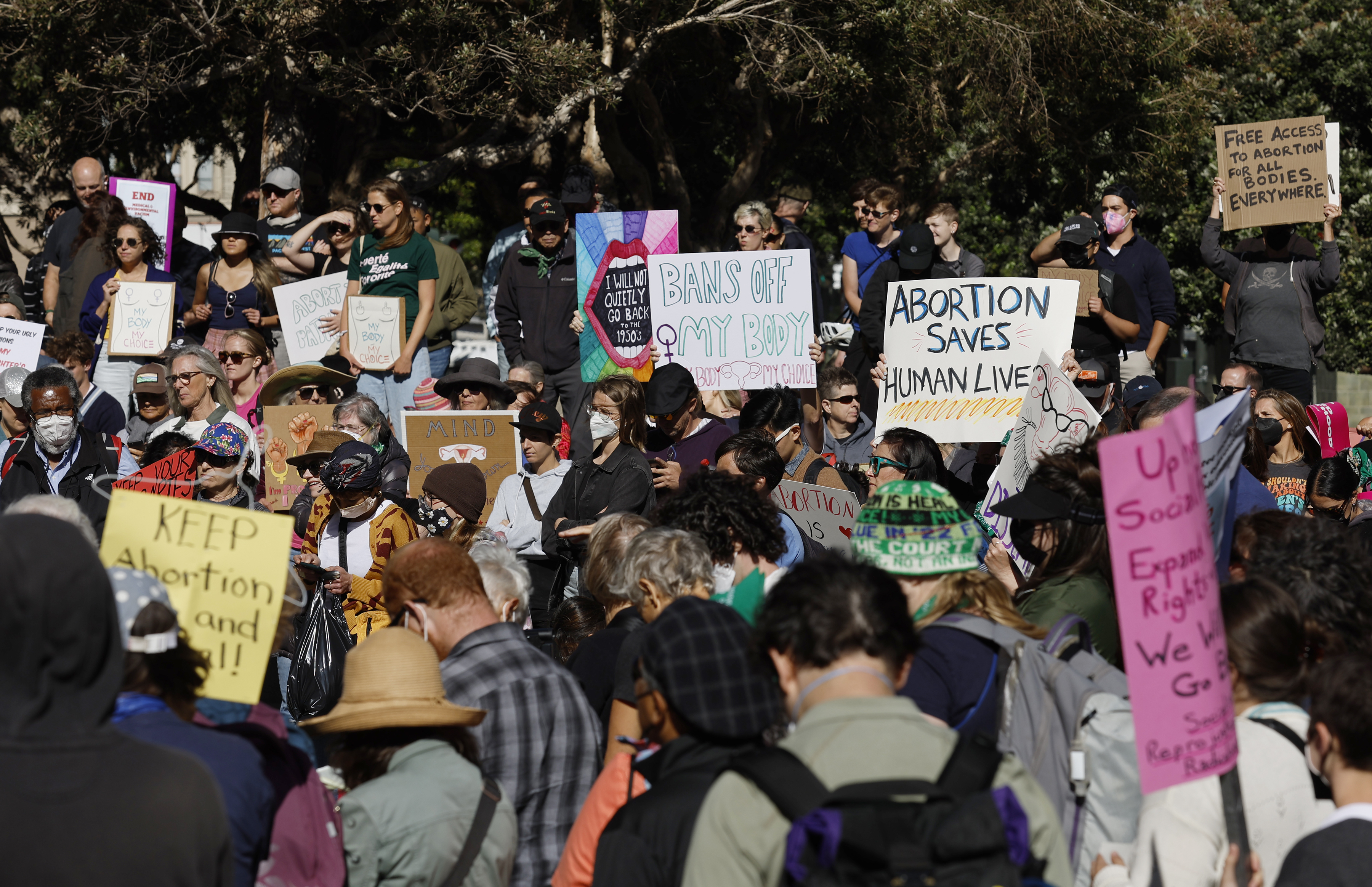 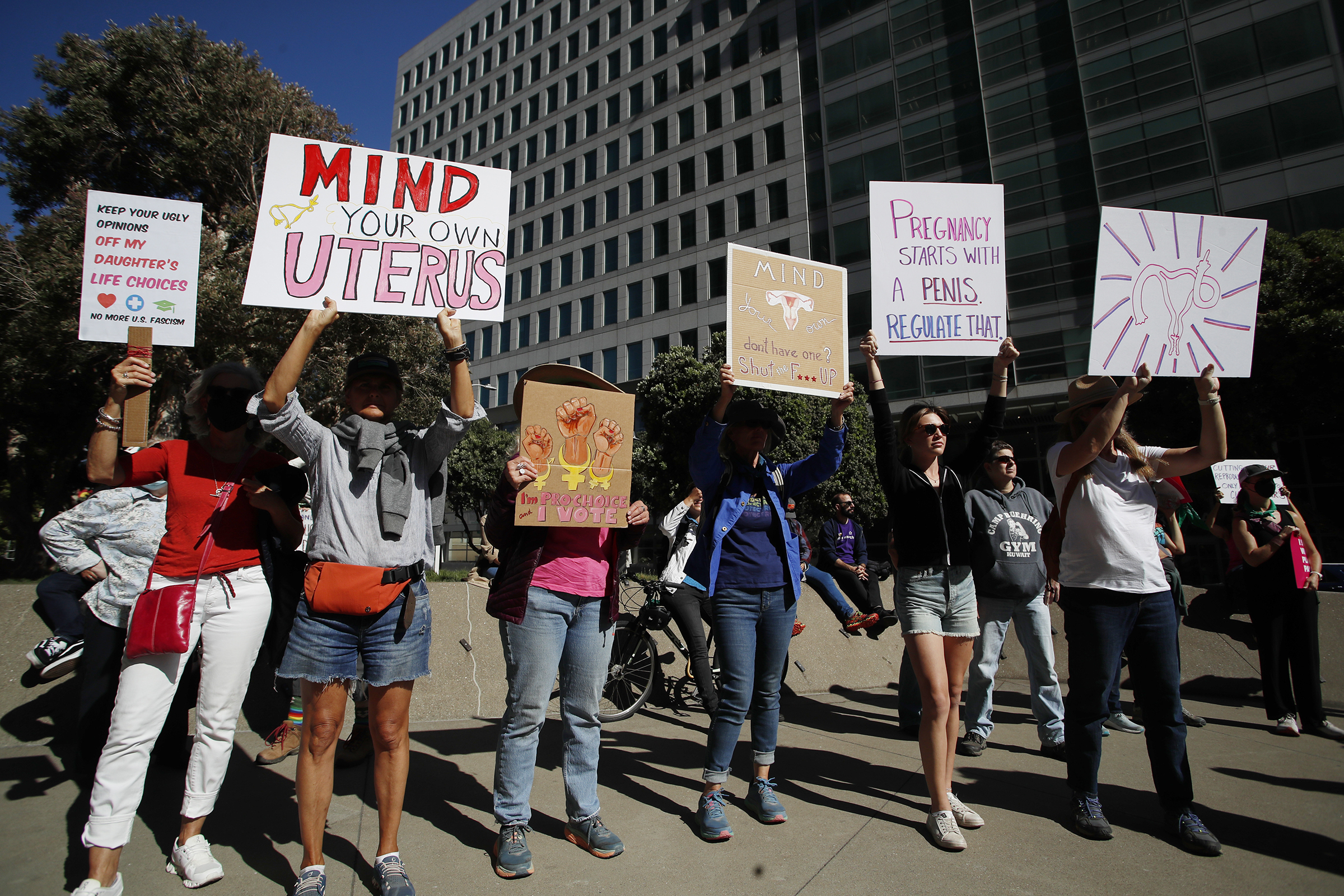 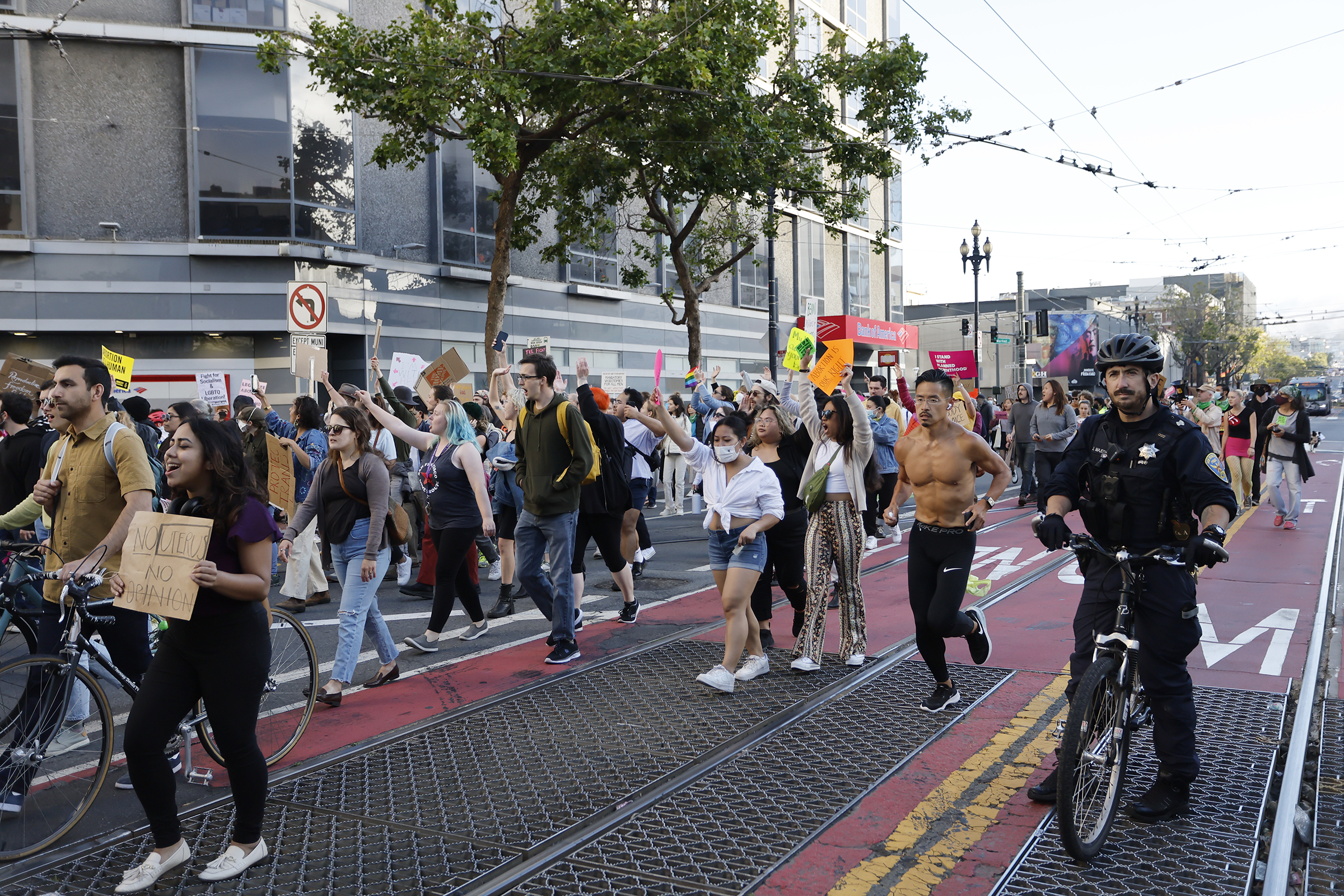 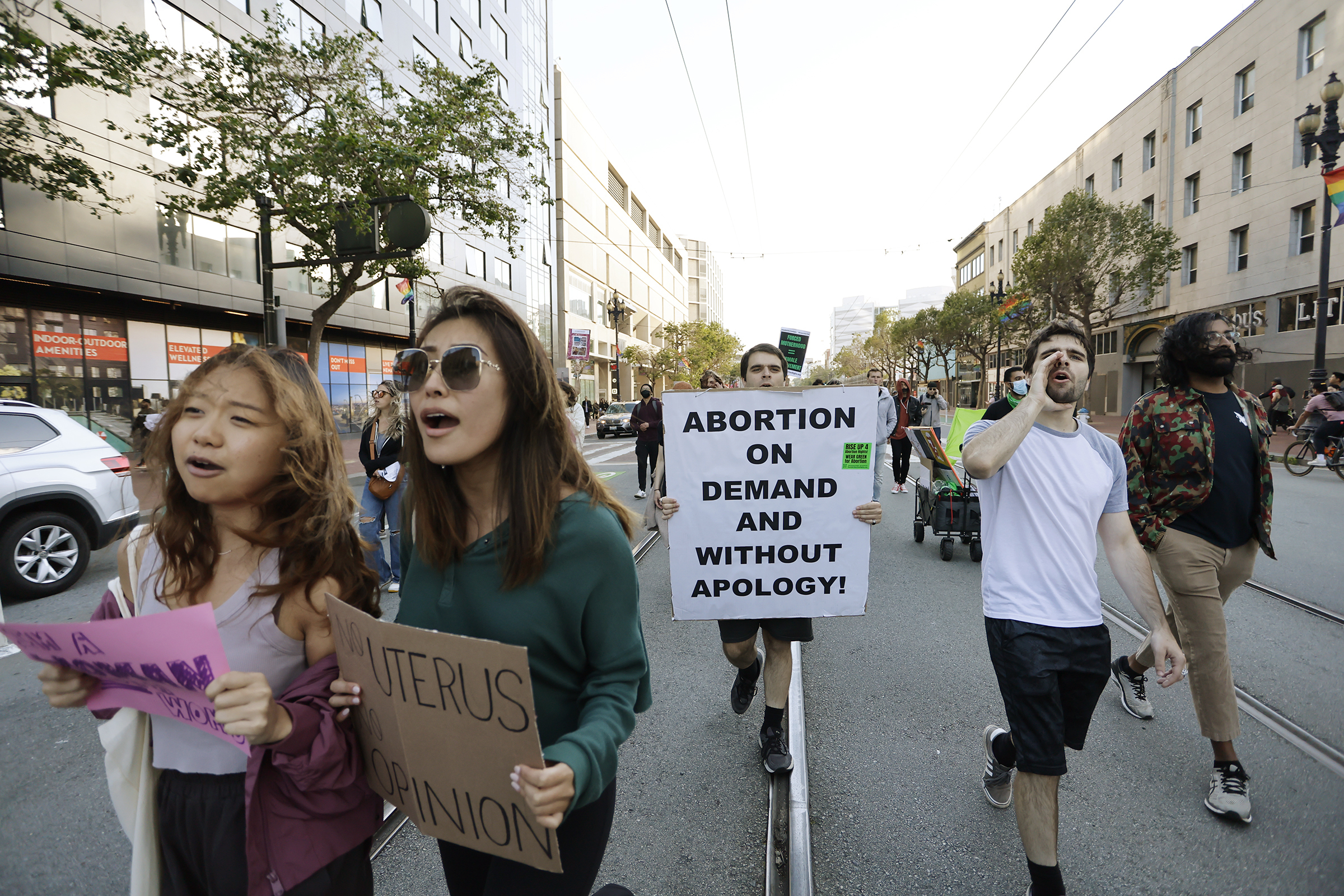 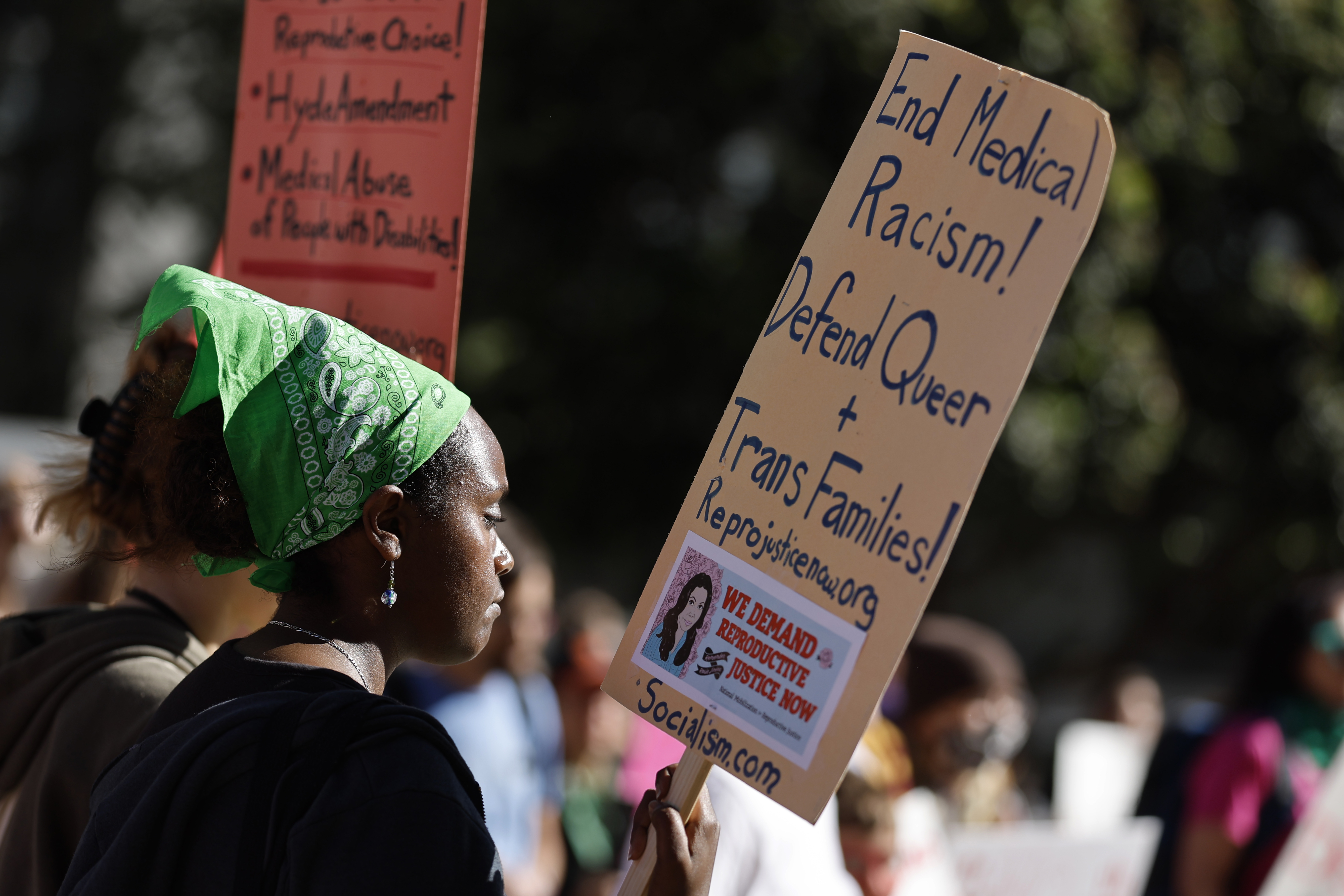 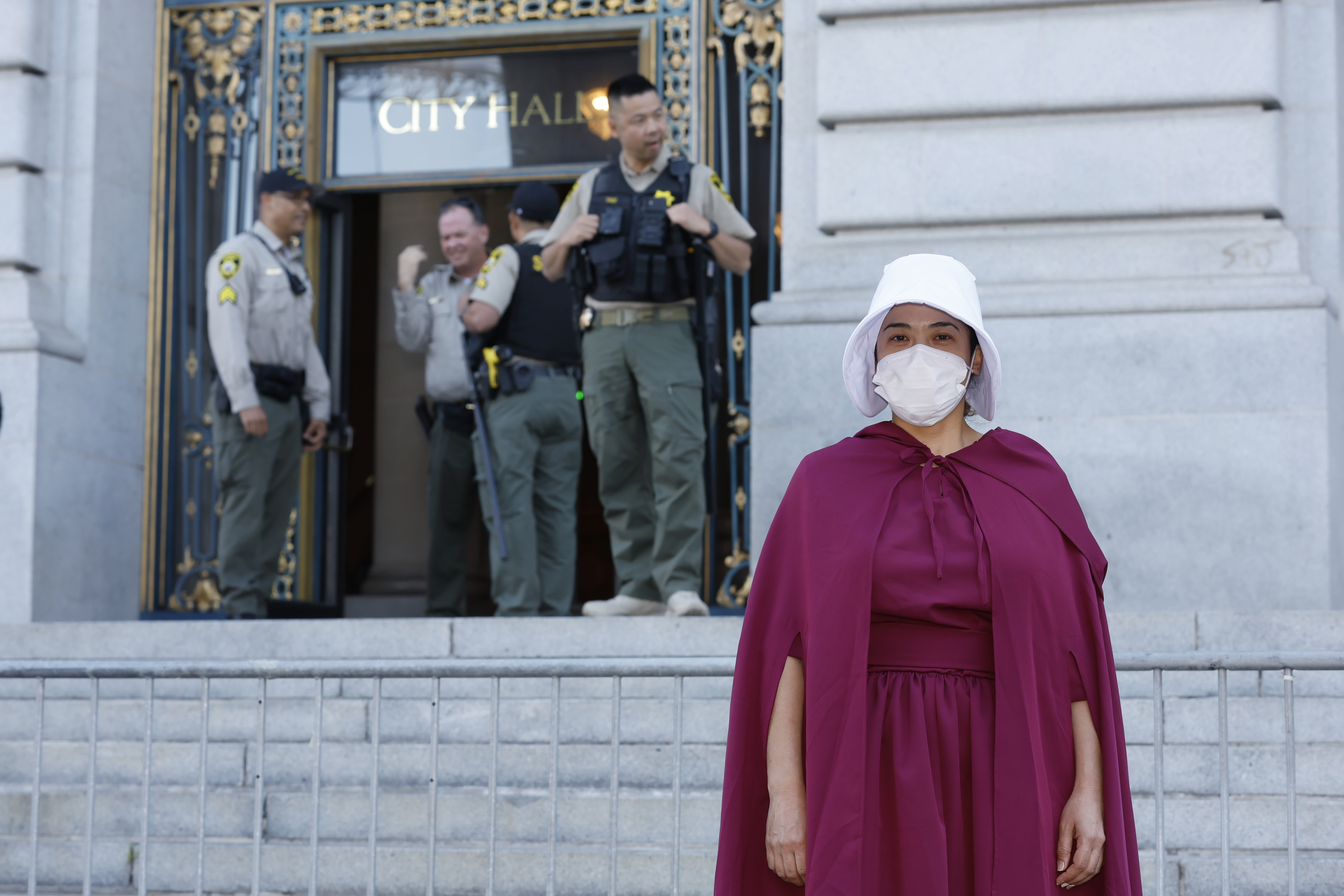 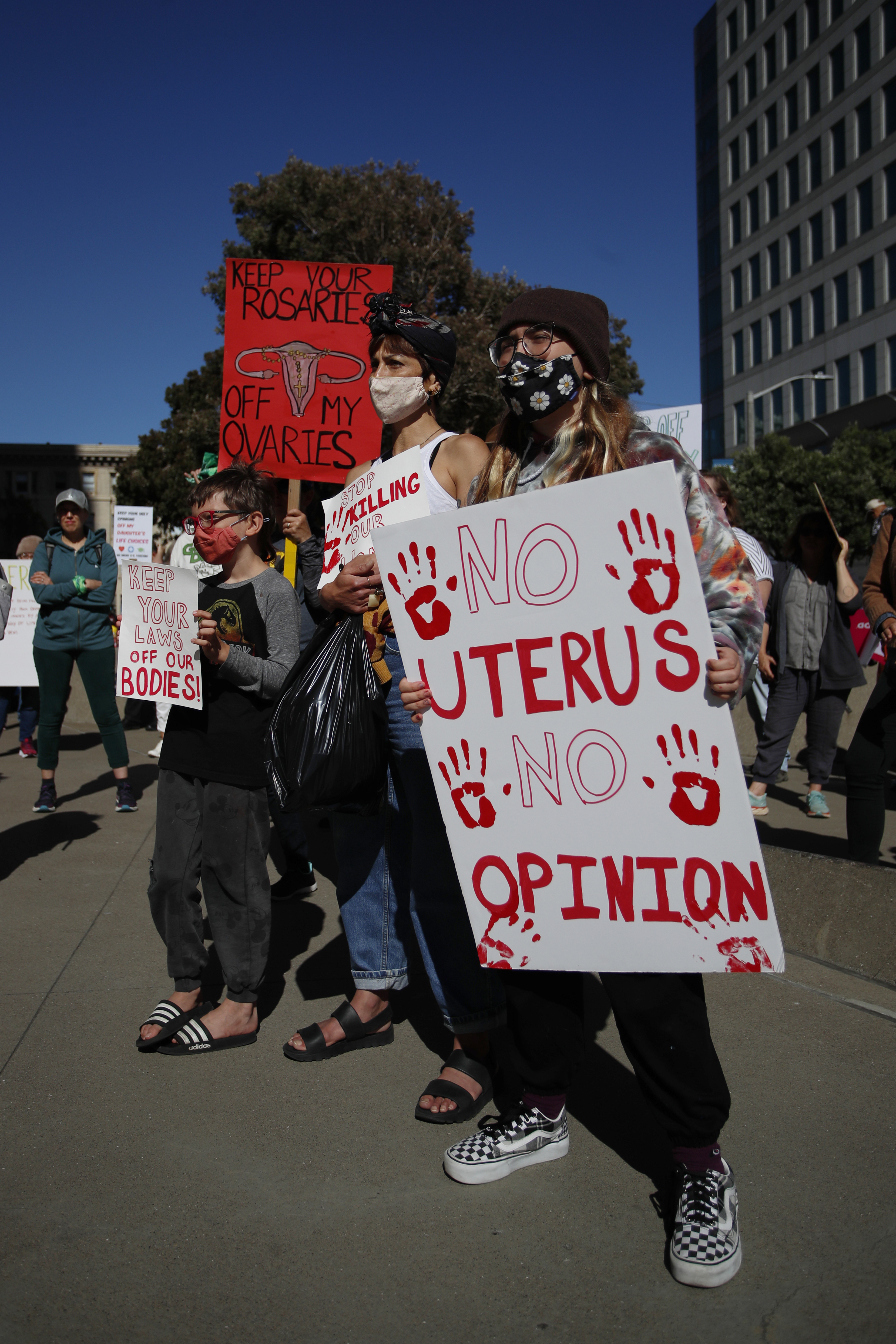 There, they vowed to do everything they can to help protect women in other states.

"We're really going to rely on abortion funds and other people who are going to step up to support these people economically to get out of these states and get the care they need," said Gilda Gonzales of Planned Parenthood.

An initiative on the November ballot would guarantee abortion and contraceptive rights in the state constitution.

"I feel incredibly privileged to live here in San Francisco where I have so many like-minded individuals," said protester, Elizabeth Cox.

And while protesters say they're frustrated by the day's events, they tell us they're not going anywhere.

Viewing Friday as day one of a long fight ahead of them.

"I want to see all the young people in this country get out to vote. We have a really liberal generation that is turning 18 and I want to see them out at the polls come midterms," Cox said.

As a Downtown San Jose rally for reproductive rights kicked off on Friday evening, so too did a celebratory "Thanksgiving" dinner.

Both events were planned in response to the overturning of Roe v. Wade.

"'Thanksgiving' in the sense of- we're giving thanks to God for the fact that babies will be saved as a result of this Supreme Court case," Silicon Valley Reform Baptist Church Pastor Brian Garcia said.

Following Friday's dinner, Pastor Brian said the congregation would pray. Prayers for California, the governor and other elected leaders, that they would pass similar anti-abortion rights laws as other states.

The high court's decision offered some promising development according to Garcia.

"We believe that this is just the beginning of this movement," he said. "So, it's only a matter of time before the gospel gets a foothold in California again."

However, as the church prayed, around one hundred abortion rights supporters protested outside San Jose City Hall.

The South Bay community came together, fired up and frustrated over Friday's landmark decision.

RELATED: What does Supreme Court decision on abortion rights mean for CA?

Governor Gavin Newsom made it clear the state is a place where abortion access will remain, including keeping available access to those living outside of California.

Still, Panday is concerned about the people left without any options, simply because of their location.

Gabriel added, "America's supposed to be the land of the free, but really we're not free at all."

Rallies are also happening Friday evening in Oakland and San Jose, as well as in San Mateo, where at Central Park, activists rallied for reproductive rights after news broke of the Supreme Court's decision.

"This is not the time to be silent," said Diane Papan, San Mateo's deputy mayor, who organized this rally. "We are going to merge, organize, donate, vote."

San Mateo County has enacted a 100-foot buffer zone ordinance to protect access to the local Planned Parenthood Mar Monte clinic and has recently allocated $1 million to support Planned Parenthood and other local abortion clinics in the city's steps to become a sanctuary for people seeking abortions.

Sen. Josh Becker said he was saddened to be at this afternoon's rally as a father of an 18-year-old daughter who no longer has the same rights that were in place in the United States since 1973.

"There is a coordinated right-wing extremist attack on women. There is going to be potentially an attack on LGBTQ individuals," said Assemblymember Kevin Mullin, who represents San Mateo and Redwood City in the 22nd Assembly District.

Friday's decision, which came more than a month after the leak of a draft opinion by Supreme Court Justice Samuel Alito, indicating the high court was prepared to take this step. Friday's outcome is expected to lead to abortion bans in about half of the 50 states.

On Saturday, Congressman Eric Swalwell plans to speak at a 10:15 a.m. rally at Planned Parenthood in Hayward, 1032 A St.