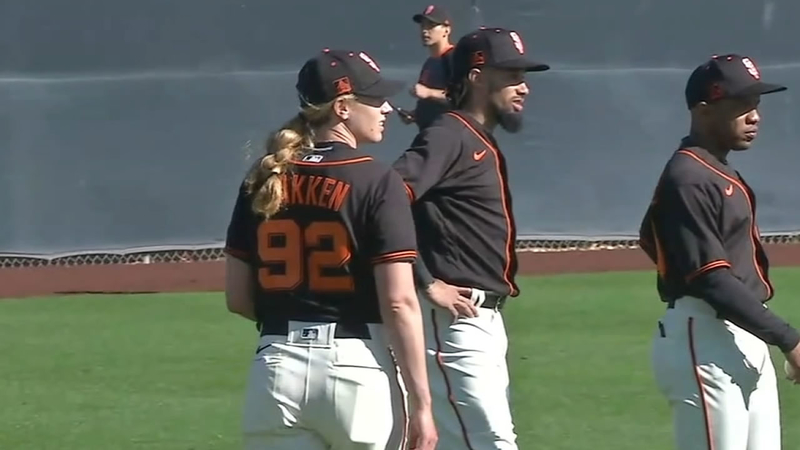 Giants coach Alyssa Nakken on why diversity relates to winning

SAN FRANCISCO (KGO) -- Since the beginning of baseball, men have dominated the field... until the moment a woman stepped out in uniform in 2020.

"It was certainly emotional because I grew up just loving the Giants, I was three weeks old when I went to my first game, so it was like a combination of one, like 'wow no female has done this before' and two, I get to represent this baseball team that has meant so much to me for so many years and what an honor that is," says Alyssa Nakken, assistant coach with the San Francisco Giants.

California native Alyssa Nakken certainly put in her time to get to this point, from her years as a star softball player at Sacramento State to taking on a dream internship for her beloved Giants in 2014, to working off the field with the team before becoming a coach.

"One of my supervisors at the time, asked a question like 'Okay, so if you could have any role here in this organization what would it be?' I told him I don't see it yet. I know it's here, but I just don't see it," she says.

Of course, Nakken couldn't see "coach" as a possible title at that time.

San Francisco Giants' Alyssa Nakken made history as the first full-time woman head coach in Major League Baseball. She joins the "With Authority" podcast to talk about her journey and what's next for the Giants in 2021.

"It just never crossed my mind because I never saw a woman in this position," she says.

But that all changed when the Giants hired Gabe Kapler as manager, who built a new coaching staff with an open mind.

"I think there's always going to be question marks, because people don't have a good understanding of how valuable diversity can be in in leadership positions and it's our belief that diversity and winning are very much connected," Kapler explains.

For Kapler, hiring Nakken came down to her being the best person for the job.

"I think, first and foremost, as I mentioned, she's an excellent connector and communicator so she can see issues that arise and think about how to problem-solve so that we can be good at solving those issues. Independently, she's as hard of a worker as I've been around and she's more than willing to take on any task and she's a great task executor," he says about Nakken.

Nakken says the job offer for the assistant coach position did come as a surprise.

After gladly accepting it, she made history, becoming the first female MLB coach.

This big step made headlines and drew some criticism.

"I don't feel any sort of added pressure. I think in this game there's just so much pressure, you have to compete at the highest level every single night for a really long season so that's a lot of pressure. I work with and I work for Kap, and so you know that's the leader that's who we're working with and working for. We really trust in his leadership and yeah he puts pressure on us to show up every single day and kind of elevate and raise the bar for ourselves, and each other," Nakken explains.

49ers coach Katie Sowers is using her platform to give back to the community during the novel coronavirus pandemic.

Nakken also says there's a benefit to more women being hired in the MLB, on and off the diamond.

"Yes, absolutely... I think it's just silly that for so long they've only, like, pulled from 50% of a candidate pool. So when you cast a wider net you have so much more opportunity to actually select the best person for that role, so I think just naturally the teams are going to see just how much of a competitive advantage, you can have by adding diversity to your staff into your clubhouse," she says.

Hiring more diverse candidates, whether its life experience, race or gender, is what Nakken and Kapler both believe, at the end of the day, makes for a winning team.

VIDEO: How a Bay Area 'hike' gave women chance to race decades before they could compete
EMBED More News Videos

The 'Dipsea Hike' allowed women to compete in the race that goes from Mt. Tam to Stinson Beach, which is the oldest trail in the U.S.

For all the girls and women now inspired by Nakken's move in the big leagues, she says it all came down to her always being herself and staying true to her values.

"Before my first spring training that was the best advice that I got, was don't try to be the type of coach that you're not. And it seems simple, but I think about that every single day. And I'm really happy that it's just simple advice, because it makes everything feel less overwhelming," Nakken says.

The Giants just recently held a seminar for some local college softball teams at Oracle park.

The goal was to expose them to different areas of the game.

Nakken says one of those women has already interviewed for a job in the scouting department for another team.