Bay Area woman ticketed for using FasTrak lane when she didn't; still had to pay fine 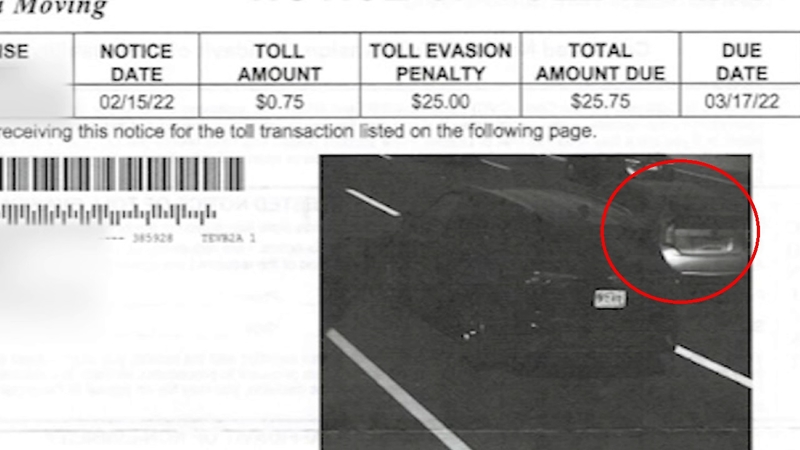 Woman ticketed for using FasTrak lane when she didn't

LIVERMORE, Calif. (KGO) -- Complaints of unfair tolling on FasTrak express lanes continue to roll in to 7 On Your Side.

Many drivers say FasTrak charged them for carpool trips that should be free. Statistics show thousands of drivers every month are getting toll violation notices for using the lanes without a FasTrak account.

Elisa Estremera of Livermore got a toll evasion notice for driving in an express lane - even though she never did. What was worse, the violation notice itself proved she was innocent - and still, FasTrak said she had to pay.

"Based on the picture, I'm not in the express lane," Estremera said.

Estremera is careful never to drive in FasTrak toll lanes. She doesn't have a FasTrak account, and doesn't want to get a ticket.

So, it was puzzling when she got one anyway.

Estremera was driving up the I-680 corridor on that day, but not in the express lane.

Yet a month later she got a toll evasion notice demanding the 75-cent toll plus a $25 penalty.

After a six-year-long lawsuit against FasTrak for unfair penalties stemming from electronic tolls, a Superior Court judge gave their surprising ruling.

But the fuzzy picture showed a different car in the express lane on the far left, not hers.

Estremera's car is in the middle lane, which is free. She called FasTrak.

"I asked her... 'Is there one FasTrak lane, or two?'" Estremera said. "She said 'let me put you on hold.' She got back to me and said, 'Both lanes are express lanes.'"

But that is absolutely not true. That corridor has only one express lane, on the far left.

A FasTrak agent told her there was only one way to avoid the fine.

"She offered to waive the violation if I signed up for FasTrak," Estremera said.

Lawyers representing the transit agencies in a class action lawsuit against FasTrak accuse the other side of misconduct in service of a "money grab" lawsuit.

Estremera didn't want FasTrak, especially after hearing of all the mistaken charges.

Besides, she was innocent. She called FasTrak again.

Estremera contacted 7 On Your Side. As it turns out, thousands of motorists got tickets for using the express lanes too.

The statistics do not show how many drivers actually received tickets, nor how many disputed them, like Estremera did.

"To me, it was not the fine so much as the principle," Estremera explained.

MORE: FasTrak has the wrong stationery, sends 'toll violation' notices instead of invoices

An MTC spokesperson said not all violations lead to tickets, for various reasons. For example, cameras don't always get a clear picture of the license plate.

However, MTC acknowledges many drivers are unaware these lanes now require an account to avoid fines, even for carpools.

The spokesperson said it was unclear why the FasTrak agent told Estremera there are two express lanes. But FasTrak dismissed her ticket.

"I saw that ABC 7 On Your Side has been able to help a number of people," Estremera said. "So thank you to ABC7."

The MTC could not explain why Estremera got the ticket in the first place, but it appears the FasTrak cameras captured her license plate as she passed by the cameras.

If you've had this happen to you, contact 7 On Your Side.