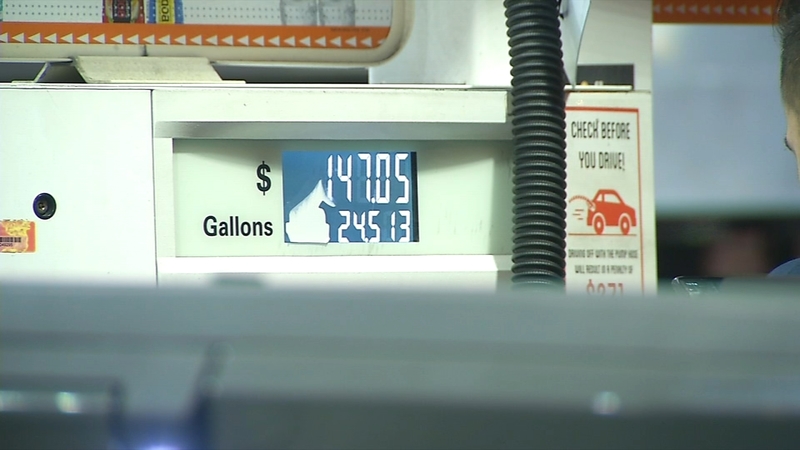 SAN FRANCISCO (KGO) -- California hit another record for the average price of regular unleaded gas this weekend. AAA says the state is averaging $5.28 a gallon as of Sunday. That's up $0.11 from Saturday's average.

Long lines could be seen at the Costco in South San Francisco where the price of gasoline continues to surge.

"These prices are ridiculous!" said Tammy Eiland of San Mateo.

RELATED: $7 a gallon for regular gasoline? At least 1 gas station in LA is getting close to that mark
EMBED More News Videos

The average price of a gallon of self-serve regular gasoline in L.A. County rose to $5.247 on Saturday, but some gas stations in the area have even higher prices.

And that's coming from those paying Costco's $5.09 a gallon for regular unleaded, couple miles down the road and it's $5.69.

"Most California cities will likely move to $5.25 in the next week, we could eventually see California at $5.50," said Patrick De Haan of GasBuddy last Friday. Two days later and now the California average is $5.28 a gallon, a record state high according to AAA. All amidst talk that the United States is considering a ban on Russian oil imports due to the situation overseas. One that drivers we talked with are well aware of.

"It's not as sad as these poor people in Ukraine they have to worry about sleeping somewhere tonight so I'm not going to complain about the gas prices," said Vickie Herriott of San Bruno.

Those near Big Sur in Gorda, California may have a different tone though. $7.59 a gallon there for regular unleaded.

California's already record-high gas prices are expected to get even more expensive in the coming months, fueled by the crisis in Ukraine.

As for the Bay Area; Napa, Marin, and Sonoma counties are the most expensive for gas while Solano, Contra Costa, and Santa Clara are the cheapest according to AAA.

"I can't afford to. I probably have to go back to India for four months out of every year so I can live," said Arun S. Chauhan of South San Francisco.

"I'm going to have to start taking the bus or riding a bike or something if it goes up to $6," said Beltran

"It's really hard you know and everybody is doing the best they can to get by," said Eiland.