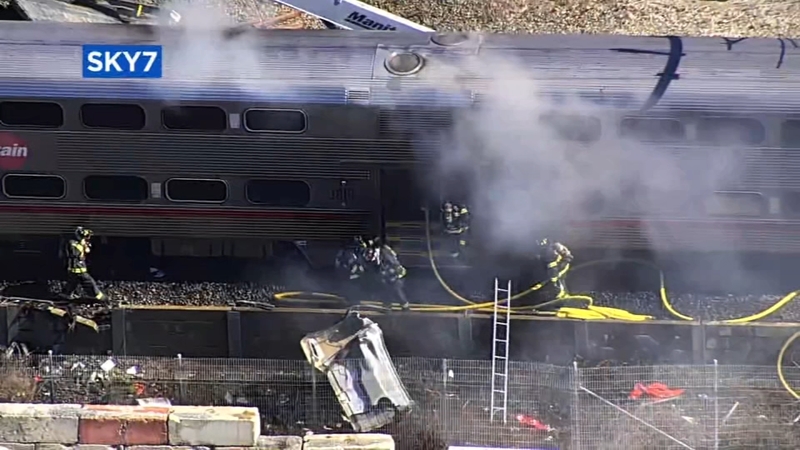 Investigation underway as to how Caltrain collision happened

None of the injuries are life-threatening, according to Caltrain spokesperson Dan Lieberman late Thursday afternoon. Five people are being treated at a local hospital.

At least 13 people have been injured after a train slammed into a large truck in San Bruno Thursday morning, firefighters said.

Passengers were visibly shaken following the crash and told ABC7 News about their experiences onboard.

"It was very scary for everybody. Everybody just kind of pushed, not pushed their way through, but we were all kind of anxious to get off the train as soon as possible," said passenger Elizabeth Tom.

The National Transportation Safety Board is investigating the collision and Caltrain officials are working closely with them to assist the investigation.

Caltrain passengers described what they felt and witnessed after a fiery crash between the train and the vehicle.

"The southbound 506 struck some on-track equipment, including a crane. This resulted in a fire," Lieberman said.

Lieberman says it's unclear at this time why the equipment was still on the tracks and where exactly a breakdown in communications occurred.

"That is under investigation. We will get an answer as soon as we have one," he said.

"There's always trucks working on the tracks, always there, but we've never seen nothing like this," said neighbor Jovani Lopez.

The collision, which occurred just before 10:40 a.m., led to systemwide delays, Lieberman said.

The NTSB said late Thursday evening its launching a Go-Team. Some members already arrived and the rest on Friday to investigate the crash. They're trying to calm nerves and get answers as to how this could have happened.

NTSB is launching a go-team to investigate the March 10, 2022, collision between Caltrain Train Number 506 and an on-track vehicle. Check Twitter @NTSB_Newsroom for updates.

A bus bridge, operated by Caltrain to replace train service in the affected area, is in effect until at least 4 p.m. Friday between the South San Francisco and Millbrae Caltrain stations. For the rest of the system, Caltrain will continue to operate under its regular weekday schedule. Passengers traveling between the South San Francisco and Millbrae train stations should expect service delays as a result of the bus-bridge.

One commuter in San Francisco said he was trying to get to San Mateo for a business meeting but ultimately ended up canceling.

"I'm just going back home. Because it just doesn't make sense. I wouldn't get there until long after I need to be there," said commuter Darrell Greenhouse.

"Our deepest thoughts and sympathies are with all those who were injured today," said Michelle Bouchard, Caltrain's acting executive director. "Caltrain's core values have always prioritized the safety of our passengers, employees and the communities we serve, and we are deeply disappointed that those standards were not met today. We have a long history of providing safe and reliable service and we are committed to working closely with the NTSB and other regulators to determine the cause of today's incident. We will restore full Caltrain service as quickly and safely as possible."

Passengers can receive relevant Caltrain service updates by following @CaltraINAlerts on Twitter and by checking the Caltrain Facebook page and Caltrain.com.

Caltrain will release additional information on the incident and the investigation as details become available.