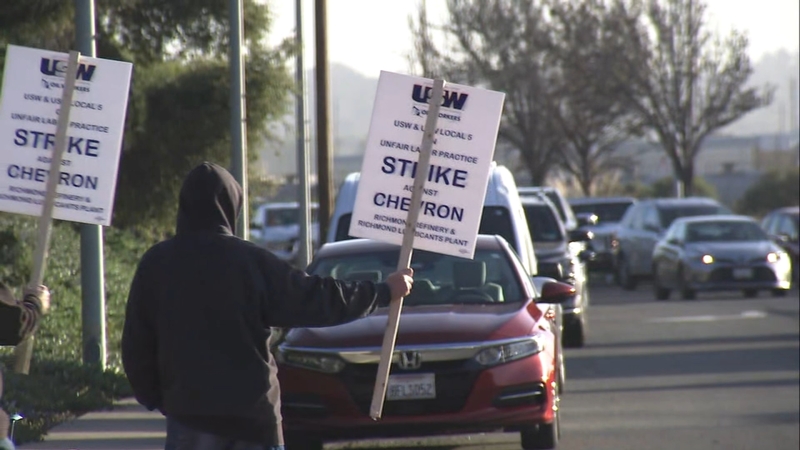 RICHMOND, Calif. (KGO) -- More than 500 Chevron refinery workers walked off the job in Richmond Monday and they say they are ready to stay on the picket line as long as it takes to get a fair contract that helps them cover the cost of inflation.

Chevron said in a written statement the strike should not impact gas prices: "Chevron Richmond is fully prepared to continue normal operations to safely and reliably provide the products that consumers need. We anticipate no issues in maintaining a reliable supply of products to the market. Chevron remains committed to safe operations for our workers and communities."

Workers accused the refinery of bringing in outside workers to replace them while they are on strike.

"This is a complex facility," said USW Local 5 First Vice President B.K. White. "We do a lot of training and somehow magically they came up with enough people we have never seen before to run the plant. We pray they are safe in there."

Some flaring was visible at the refinery Monday morning. Workers on strike wondered if the flaring was the result of untrained workers at the helm.

Chevron would not answer questions about whether the new workers were to blame, but did write in an email: "Refinery employees quickly worked to minimize and stop the flaring. A Community Warning System Level 1 - one of the lowest on the scale - was issued to keep residents informed. Flares are highly regulated safety devices and are an important part of keeping the Refinery running safely."

The USW union reached a national agreement for a 12% pay raise, but the local chapter is asking for 5% more on top of that raise because of the high cost of living here in the Bay Area.

"The cost of living in the Bay Area, as any blue collar worker knows, has gotten to the point that makes it hard to live," said White. "Our workers have to live 45 minutes to an hour out. We are just asking for a little bit of relief."

VIDEO: Price of 1 gallon of gas will get you 'basically anywhere' in Bay Area on BART, official says
EMBED More News Videos

He also said, "A cost of living increase for the Bay Area it's not for us to get rich. Our medical, Kaiser, went up 23 percent this year and the company did not contribute another penny to it."

In a written statement, Chevron countered, saying: "We believe our contract offer is fair, competitive and responsive to USW concerns. However, the union's demands exceeded what the company believes to be reasonable."

Union representatives say there are no current plans to return to the bargaining table.

The striking members make up roughly a third of workers at the refinery; they are lab technicians, warehouse workers, and maintain machinery.