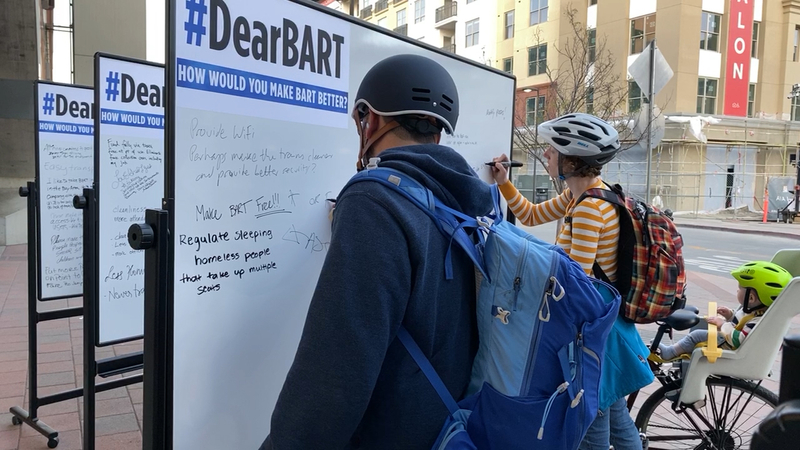 ABC7 talks riders about their concerns about Bart

PLEASANT HILL, Calif. (KGO) -- ABC7 is dedicated to building a better Bay Area and part of that effort is taking action and investigating further. Hundreds of thousands of people living in the Bay Area rely heavily on BART.

But over the years, riders have had their concerns with cleanliness, safety and overcrowding.

ABC7 spent Wednesday afternoon talking to BART riders at the Pleasant Hill BART Station about their concerns and offered them a platform to share their thoughts. Five dry-erase boards were provided for evening commuters to write a message to BART on how they could improve the transit system.

John Grayson rides BART from Pleasant Hill to San Francisco State four days a week. He thinks BART could improve by making a long commute comfortable for riders. "Right now, it feels very boxy. Maybe add some WiFi and phone chargers. That would make it awesome," he said.

Emily Claghorn rides BART and had a lot to say. "Most importantly, I want it to be safer and cleaner. Sometimes I get on the train and it just smells so badly. I even get super nervous sitting down on BART," she said.

BART WEEK: Part of our effort of building a #BetterBayArea we want to hear from you. Meet us at Pleasant Hill #Bart Station and let us know how you would make Bart better. 🚇 #DearBart pic.twitter.com/baVxMwfe2I

The morning commute can be hectic for many and depending on where you get on BART can depend if you have a spot to sit or stand. Joe McGowan thinks that BART should start in Pleasant Hill or else he will start driving to work. "Nobody gets a seat from Pleasant Hill anymore. It's a big deal, standing up for forty-five minutes," he said.

Another major challenge that BART faces, is safety.

Several BART riders stopped to write that they would like to see more BART police on and off the train. Recently, Karen Sugihara witnessed an altercation between two BART riders and she suggested "more of a police presence."