SAN FRANCISCO (KGO) -- Fleet Week San Francisco, the week-long celebration of America's sea services, continued to soar and amaze across the Bay and in the skies.

The Blue Angels -- the U.S. Navy's famed flight demonstration squadron -- stunned the large crowds that gathered to watch the aerobatic flight performance along the Embarcadero in San Francisco on Saturday.

Hearing loud thunder on a clear, sunny day could only mean one thing: jets flying high for Fleet Week.

"It was loud, it was cool, it had a bunch of colors," said Jayden Merced of Hanford, Calif. Hanford is part of a junior group of Navy League Cadets who came from the Central Valley to get a taste of the seagoing military experience.

"We're so thankful for the Navy, showing us what they have," said Destiny Sanchez, who just enlisted with the Kings County Squadron at the Naval Air Station in Lemoore. The group had just finished touring a naval ship.

The main attraction, however, was the Blue Angels.

Blue and gold glimmering in the sunlight, the U.S. Navy's demonstration squad, the Blue Angels, took to the skies with an impressive aerobatic show.

"I'm a lifelong aviation fan. I'm an aviation mechanic for Delta, so I love that stuff," said Casey Erickson, who was visiting from Minnesota.

Those who stuck around after the airshow were in for a treat at Pier 39.

Blue Angels pilots were treated like rock stars the second they stepped off a city tour bus to meet adoring fans.

"My girls really wanted to meet the pilots. They thought the show was amazing," said Kathy Avnur, who lives in Saratoga.

People got to take pictures and get autographs with the fighter jet pilots.

"It's great to see the support and people, they're impacted by that. You can sense the energy. You can feel it in the crowd. It gives you a great sense of pride and feeling of accomplishment," said LCDR Nate Scott, pilot for Blue Angel #4.

My photographer and I got to meet one of the @BlueAngels flying for @FleetWeekSF. Lt. Nate Scott grew up in #Danville so putting on an airshow in front of a hometown #BayArea crowd carries special meaning. #FleetWeek #BlueAngels @abc7newsbayarea #abc7now pic.twitter.com/QLOqaHcvXa

For Scott, a Danville, Calif., native, being back in the Bay Area where it all started is extra meaningful.

"I saw the Blue Angels fly from the top of my dad's shoulders and it was a memory that I'll never forget," Scott said.
Report a correction or typo
Related topics:
arts & entertainmentsan franciscofleet weeknavymilitaryair showblue angelsbay area events
Copyright © 2021 KGO-TV. All Rights Reserved.
RELATED 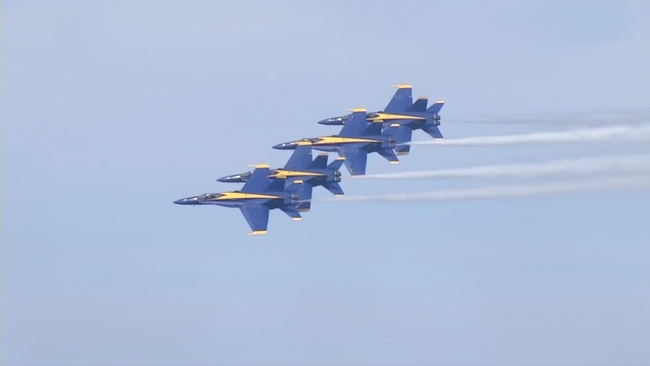