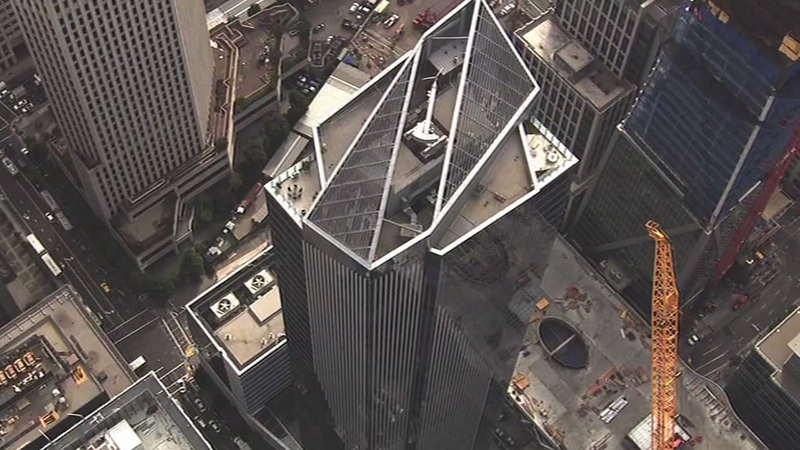 SAN FRANCISCO (KGO) -- Some of San Francisco's wealthiest tenants are being reassured their high-rise building is a safe place to live after learning the Millennium Tower is sinking and tilting.

The 58-story building is a condominium skyscraper located on Mission and Fremont streets. It has been voted by some as one of the top 10 residential buildings in the world.

According to an independent consultant hired to monitor the problem, the residential building has sunk 16 inches since its completion in 2008. It has also tilted 2 inches. "There are some cracks in the wall in the parking garage and there's been some settling on the club level floor," said Pat Dodson, a Millennium Tower homeowner.

One Yelp review noticed windows and a dishwasher getting harder to open and bubbles appearing in the floor.

In July, the homeowners' association brought in an engineer. "Why the building is sinking and tilting. It's very clear after listening to him and doing a lot of research, which my husband and I have done, that Millennium Partners did not build to bedrock, and that's the cause of the problem," explained Dodson.

The owners are pointing the finger at their neighbor. They allege the massive hole dug next door for the new Transbay Transit Center is to blame for the building's issues.

A spokesman for Millennium Partners issued a statement saying: "All buildings settle over time. 301 Mission has settled more than originally anticipated because it was affected by subsequent construction by others."

The Millennium Tower association released a statement saying: "It will take all necessary steps to ensure that the buildings are fully repaired and that all parties that caused or contributed to the settlement conditions are held legally accountable."


The Transbay Joint Powers Authority responded by saying residents' claims against the TJPA are "misplaced" as demonstrated by data collected over more than seven years.

They went to say, "full responsibility for the tilting and excessive settlement of the building lies with Millennium Partners, the developer of the Tower."

The TJPA says the 60-story Millennium Tower is made of concrete rather than steel, "resulting in a very heavy building. This heavy structure rests on layers of soft, compressible soil. The foundation of the Tower, however, consists only of a concrete slab supported by short piles that fail to reach the bedrock below. That foundation is inadequate to prevent settlement of a building with the weight of the Tower."

Instead of steel anchored on bedrock more than 200 feet down, it's made of concrete, sitting on a slab with pilings just 80 feet into the soil.

The Transbay project environmental document was approved in 2004. When Millennium Partners started construction of the Tower in 2006, they knew that the TJPA intended to excavate adjacent to their building, according to the TJPA.