Oakland residents describe harrowing escape from high-rise fire: 'Get out so you won't die' 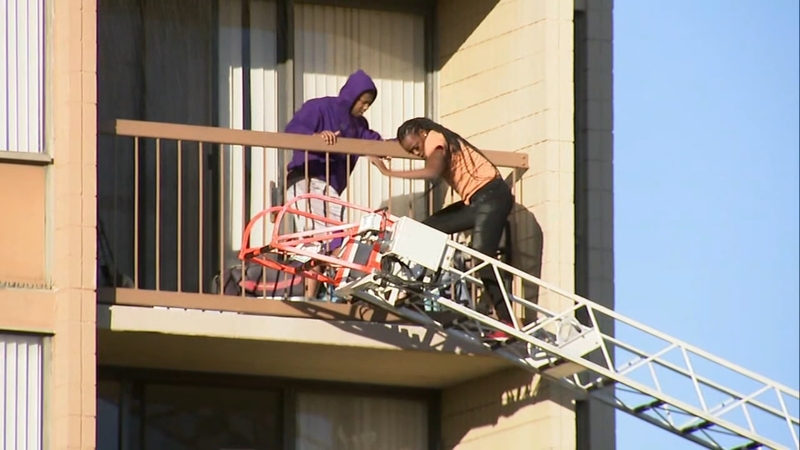 At least five people were transported to local hospitals. One of the residents who was rescued described the agonizing moments that made the difference between life and death.

"The only thing on my mind is what goes on anyone's mind, and that was to get out so you won't die or pass out or anything, because I didn't know if it was going to collapse," said Artijanae Doss.

Around 4:15 p.m., Jeff Balton and his girlfriend, Artijanae Doss noticed smoke bursting into their apartment unit. When they tried exiting through the main door they were hit by a cloud of smoke.

"The smoke was in the hallway. The whole hallway was pitch black, so we had to rush to the balcony," said Balton, "Once I felt the heat coming closer I said 'I got to jump down.'"

Their only option was the balcony.

"We were going to be cooked up," said Artijanae Doss.

The couple jumped from the sixth floor balcony to the fifth floor, where an Oakland firefighter helped them down a ladder.

video shows two people climbing to safety using a fire engine ladder as crews work to put out flames at an apartment building in Oakland. At least 4 people were injured including 2 firefighters.

"Probably about three minutes away from getting burnt. So, it was that close. It was coming closer and closer. You felt the heat rising - the more we were outside, it just kept getting close to us," said Balton.

On the ground, about 60 firefighters were responding to the Oakland high-rise blaze where multiple residents were screaming for help.

A 2-year-old saved his entire family from a devastating fire after his parents lost their sense of smell because of COVID-19.

"We had residents on the balconies," said Oakland Fire Chief Reginald Freeman and added, "We had other rescues that we had to make of civilians who were trapped inside this smoke-filled building. It was nothing, but the dedication and the heart of this personnel that we had the outcome that we had today."

According to Oakland Fire Department, the fire was coming from inside one of the units between the 5th and the 7th floor.

"The fire at this point remains under investigation, but we know the bulk of the fire was contained to a single unit within the building," said Michael Hunt, Oakland Fire Department Spokesperson.

Two residents and three firefighters were transported to local hospitals for smoke inhalation treatment. About 15 residents are displaced.