How high will gas prices go? CA 1st state to hit record average of $5 per gallon

Average gas prices in California jumped an average of 13 cents to $5.07 overnight. Experts say, it will keep climbing.
KGO
By Karina Nova 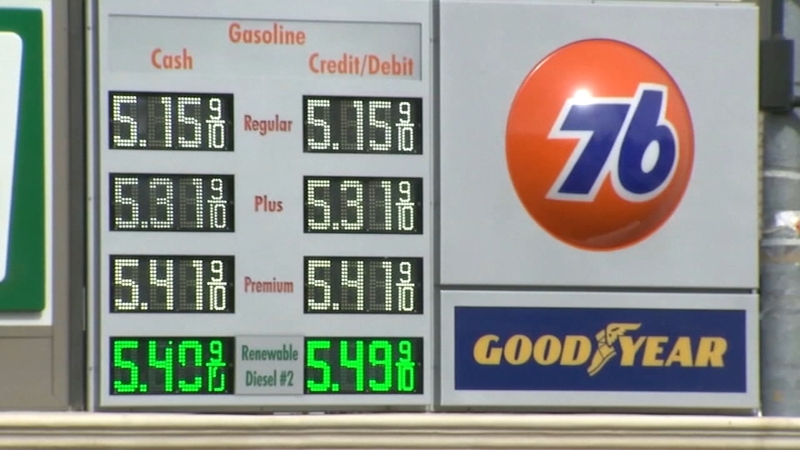 EMERYVILLE, Calif. (KGO) -- California is the first state ever to have an average price above $5 a gallon, according to gasbuddy.com.

The state's average jumped 13 cents overnight to $5.07 and experts say, it will keep climbing.

At an Emeryville Shell gas station, the sign for gas read $5.29 for a gallon of regular gas on March 4th.

"There will be more increases coming, maybe to the tune of another 20-30 cents a gallon. I do expect the national average in the United States will hit the $4 a gallon mark. That's less than 2-3 weeks away," he says.

The average price for gas in the Bay Area is almost at $5 a gallon. The ongoing war in Ukraine is causing prices at the pump to rise at fast rates.

"Most California cities will likely move to 5.25 in the next week, we could eventually see California at $5.50," he explains.

San Francisco and Los Angeles hit that $5.00 gallon average mark, even though some gas stations have prices listed closer much higher, some closer to $6.00.

De Haan explains about 80 percent of the gas price increase is impacted by the crisis in Ukraine. The other 20 is because of the transition to summer gas prices.

He says there have been decisions to try to remedy the gas price increase.

"Keep in mind the president had made a U.S. contribution of a 50 million barrel release last fall so overall, the 30 million barrel contribution from the U.S. is quite insignificant. The market has not reacted, prices are not going to slow down because of that release being so small. It will have very little impact and to put it into context, the 60 million announced by the IEA (International Energy Agency) being released, that's about 14 hours of consumption," De Haan says.

Professor of economics at San Jose State Matthew Holian says despite the price jump, it's not time to panic yet.

"We're used to seeing fluctuations in gas prices. We're not talking about such large increases that it's going to bring our economy to a standstill. It will affect some households more than others. As a whole we're going to come through this and gas prices are expected to come down when the conflict is over. And so that is where I think we should keep our focus, this is a short term cost for a very worthwhile cause for avoiding a war in Europe," he says.

And while Congress has considered suspending the 18% federal gas tax, Kevin Slagle with the Western States Petroleum Trade Association says they want California to look at long term solutions.

"It would have an immediate impact depending on which tax and how much, but the bigger issue for California especially is in the supply side, in production. If we could produce more here, we would have more energy independence. We're not so beholden to what maybe happens outside of our country in places that don't share our environmental or political philosophies. What's not produced in California is imported from other parts of the world. We produce about 30% of our need here and we have to import about 70%, so geopolitical issues certainly affect that," Slagle says.

De Haan says it's also important to put the current price in perspective when compared to the last record in 2008.

Gas Buddy projects at this rate with the current gas price increases, the average American will spend an extra $100 to $200 a year to fill up.

And while $5.50 a gallon as a California average of gas is not out of the question, experts say it's too early to tell if cities in California will hit a $6 average.