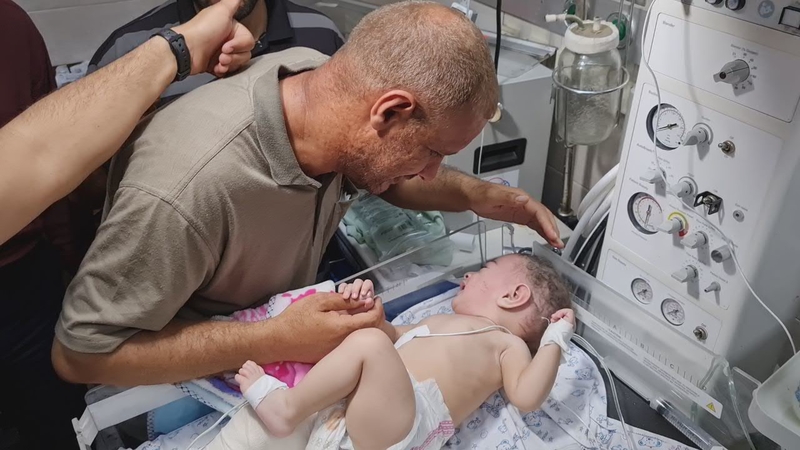 Father reunited with infant son, only child to survive airstrikes

GAZA CITY, Gaza Strip -- An intense and heartbreaking video shows the moment a father reunited with his injured infant son just hours after searching for his family throughout a Gaza City refugee camp destroyed by Israeli airstrikes, only to learn that his wife and four children were killed.

"My darling, my darling, thank God, thank God. Calm down, darling, calm down," Mohammed Hadidi is heard saying in Arabic as he consoles his child inside Gaza City's Dar Al-Shifa Hospital.

Mohammed Hadidi told reporters that his wife and her brother's wife had gathered at the house with their children to celebrate the Eid al-Fitr holiday ending the Islamic holy month of Ramadan.

She and four of the children, aged 6 to 14, were killed. Only baby Omar is known to have survived.

"This is the severest of crimes. My family never launched rockets or bombed anything, they just went to celebrate Eid with their uncle and then we now come to the hospital to take their dismembered bodies," Mohammed Hadidi said outside of the hospital. "My younger child is five months, and he is now injured at the hospital. What did he do? Did he launch rockets at the Jews? Who is angry with my five-month-old son? Allah is my suffice, and the best deputy."

ABC News talks to a 7-year-old girl forced to flee her home in Gaza amid renewed Israeli-Hamas conflict.

The blast left the children's bedroom covered in rubble and smashed the salon. Amid the wreckage were children's toys, a Monopoly board game and, sitting on the kitchen counter, unfinished plates of food from the holiday gathering.

"There was no warning ... You filmed people eating and then you bombed them?" a neighbor, Jamal Al-Naji, said, referring to Israel's surveillance over the Gaza Strip.

The Israeli military did not immediately respond to a request for comment. Hamas said it fired a salvo of rockets at southern Israel in response to the airstrike.

Despite the toll and international efforts to broker a cease-fire, Israeli Prime Minister Benjamin Netanyahu signaled the fourth war with Gaza's Hamas rulers would rage on. Hamas also pressed on, launching rockets from civilian areas in Gaza toward civilian areas in Israel.