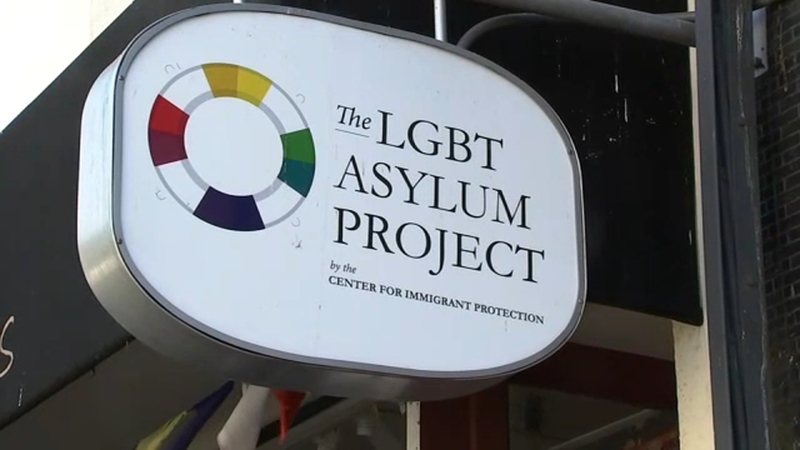 SAN FRANCISCO (KGO) -- A nonprofit in San Francisco's Castro District is helping the LGBTQ+ community facing persecution in their countries by providing free legal representation for asylum in the U.S.

"Being LGBTQ has never been easy," said Okan Sengun.

There are 69 countries in the world where it is illegal to be LGBTQ+, and in seven of those countries, it could be punishable by death.

"They live in fear. They could be killed for who they are or who they love. Asylum saves lives," said Okan Sengun.

Sengun is the Executive Director and Co-Founder of the LGBT Asylum Project helping asylum seekers stay in the U.S. He grew up in Turkey and migrated to the United States when he was 24-years-old. He understands the struggle of getting asylum. His first case was his own.

Sengun explains that in order to apply for asylum, immigrants need to submit an asylum application within the first year of their arrival to the United States.

"A lot of LGBTQ Asylum Seekers miss their one year deadline," Sengun said. "One of the reasons is sometimes they're not out. They come to the United States, they see the LGBTQ life here, and coming out is a process, sometimes it takes longer than one year. That's why we wanted to be in the heart of the Castro, to make the asylum process visible and accessible. When they come to the United States, they arrive with minimum funding and with minimum support."

In many cases Sengun says asylum seeker's communities are the ones who want to harm them or sometimes even kill them.

"Asylum seekers do not get any benefits from the government until their asylum application is approved. That could lead to homelessness, just being hungry, not knowing where to sleep that night. It's tough. That is why we switched to 100% pro bono services," said Sengun.

A former LGBT Asylum Project client who wants to remain anonymous says it helped him receive asylum in the U.S.

VIDEO: FROM THE ARCHIVE: SF Pride Parade in the 1970s, through the years
EMBED More News Videos

In honor of pride, we take a look back at our ABC7 archive and showcase some memorable moments of the San Francisco Pride Parade.

"I came to the U.S. December 2017 when I fled my country Nigeria because of being gay. Nigeria has an imprisonment term of 14 years for same-sex activities," he said.

He shared at one point his house was raided by the police.

"I was beaten up a lot of times and actually was once put in a hostage situation. Where they tied me up, were making videos of me and they were actually sexually abusing me at that time as well," he said. "Being gay is an enigma, you can't even call the police. You can't go to the law because it is a crime. So even when you are going through all this there is really nothing you can do."

The LGBT Asylum Project provides legal representation to the most vulnerable immigrant population.

"Only 13% of unrepresented applications are successful. The LGBT Asylum Project has a 100% approval rate in getting asylum for LGBT Asylum Seekers," said Sengun.

The anonymous client said he contacted Sengun while in Nigeria.

"He empathized with me but told me there is nothing the project can do because I am outside the shores of America, but if I ever see myself in California that he can help me out," he said. "The process was very smooth, he explained everything to me and he asked me if I needed any other support, mental support or anything. As much as he can provide. After my asylum was approved, my life changed. I got approval to get a work permit."

"At the end of the day, it is the individual that has to know whether they can make this journey. I may be a success story but it is a very difficult journey," said Sengun.

Sengun is the first openly gay Turkish immigrant to be appointed to a government body in the U.S. This week, he became a member of the LGBTQ+ Advisory Committee of the San Francisco Human Rights Commission.