KGO
MARIN COUNTY, Calif. (KGO) -- You're seeing "grand theft auto" in progress, a crime that caught the nation's attention. That's Marin's Max Wade -- just 16-years-old at the time -- rappelling into a San Francisco dealership and stealing celebrity Chef Guy Fieri's Lamborghini. This is the first look at evidence that got Wade a life sentence with the possibility of parole last week.

It's one thing to hear reports of what he did -- another, to actually see it. I spent days going through every court exhibit -- the crime scene photos, surveillance videos, Max Wade's computer and phone records. And, he made copies to show you the real story.

Max Wade dropped out of Marin's Redwood High School before the end of his freshman year, but he sure did his homework before pulling off his crimes.

Greg Garrett worked the case for the Marin County Sheriff's Office. He says, "I've never had a crime like this that was so sophisticated by such a young person."

Among the hundreds of pieces of evidence I inspected, Max Wade's computer history showed his preparation for grand theft auto. Just 16-years-old at the time, he Googled Lamborghinis, how to jam the auto-theft prevention system "Lojack", and lock picking.

Wade even posted a video on his YouTube channel of him practicing, less than two weeks before the car heist.

He researched British Motor Cars in San Francisco, and "mission impossible-style rappelling". That's exactly what he did at the dealer early in the morning on March 8, 2011. The crime scene photos show how he tied off a rope on the rooftop garage.

Surveillance video obtained by the I-Team catches the rope falling to the ground. Wade scales down the side of the building and into a window.

Inside, he takes his time, spending almost 15 minutes walking through the dealership.

"He had a throat mic or what appeared to be a throat mic for a two-way radio," Garrett says. "And a couple times he appears to talk on it during that time in the surveillance video."

No one besides Wade has ever been arrested in the case. He walks to the exit door and cuts the lock with these bolt cutters.

He drives the yellow Lamborghini from the second floor, down the ramp, and gets out to roll up the door.

Back in the car, Wade appears to fumble with the controls, mistakenly turns on the wipers, and pulls out into the pre-dawn darkness.

Golden Gate Bridge cameras caught the Lamborghini, and so did Tiburon's license plate readers. It came into town at 4:40 that morning with chef Guy Fieri's "guytoro" plates, and it left Tiburon at 6:13 with stolen plates.

Greg Garrett tells me, "It's amazing, he's obviously very intelligent and some of his stuff was the work of a very sophisticated criminal. Other things seem like they were teenage fantasy."

In the year that followed, Wade's text messages show he sold fake ID's to high school students -- sometimes at $500 each -- and he dabbled in dealing marijuana. He couldn't help but tell friends about the heist he pulled off, even sending selfies inside the car.

San Francisco police got a tip Wade had the car, interviewed him, but couldn't make a case.

"It was sort of the gossip around the high school that he had taken credit for the crime and had the car," Garrett says. "But I don't think San Francisco was able to contact anyone that had actually seen the car."

Wade sometimes drove the car, and its owner, Guy Fieri, often got reports of sightings, "We would get calls all the time and I mean all the time," he said. "I had friends call me who would say, 'Listen, I just saw your car on the freeway.' And I was like, believe it or not, there's more than one yellow Lamborghini convertible probably in Northern California. And people would call and we'd get reports and my attorney would hear about it. Well, come to find out that he was driving it. Brave kid."

Wade finally got caught because of his fascination with a Terra Linda High School student -- 17-year-old Eva Dedier.

He texted a friend for advice: "shud i straigh up start sexting with her or be jus be flirty with her."

Wade texted Dedier for days about getting her a fake ID, and he finally asked: "so who're you spending valentines with." Dedier answered, "my friend landon."

Landon Wahlstrom is Wade's schoolmate from Redwood High. Wade couldn't take it. He planned his next crime for April 2012 -- Friday the 13th. He's on a motorcycle, all in black, watching as Eva and Landon walk out of a Mill Valley home and climb into his pickup truck.

Garrett says, "It pulled up next to them and the cyclist pulled out a pistol and started shooting at them."

Wade fired five shots, fumbled and dropped the gun, allowing the couple to speed off. They stopped a few blocks away at Joe's Taco Lounge. Wahlstrom was cut by flying glass; shaken, but not seriously hurt. It was Wade's bad luck that the two detectives assigned to the case were motorcycle enthusiasts. They recognized the helmet Wade wore. He was caught on camera filling up at a nearby gas station, shortly before the shooting.

Greg Garrett explains, "Bilt is a store brand that you can only buy from cycle gear, either over the internet or at their retail stores, and we knew that the closest retail store was in San Francisco."

The store found Wade's receipt, and a video of him buying the helmet and that black outfit the night before the shooting. Garrett couldn't find a current address for Max Wade, but a week later came the break -- Wade contacted Eva Dedier again about getting her a fake ID, and offered to pick her up in the Lamborghini. Garrett and a team of ten officers were waiting at the Richmond storage facility where Wade had a locker. And when he spotted the officers, Wade ran.

Garrett explains what happened, "And we're very close, he's probably only less than ten feet from the front of our car at this point, one of the narcotics guys gets close enough to kick him, is able to kick him in the upper chest and knock him to the ground."

When asked if he had a gun in his waistband, Garrett answered, "He had a loaded Glock 45 with approximately 50 rounds of ammunition in separate magazines."

Garrett says Wade struggled to reach his gun, but it was stuck under the t-shirt he wore, beneath his peacoat. The detectives opened Wade's storage locker and found Fieri's Lamborghini squeezed inside with just inches to spare, the motorcycle used in the drive-by, the helmet, and guns and plans for other crimes. Wade rented the storage unit under the name "Carmine Colombo" -- he also had a fake ID in that name.

I also reported last week that Wade was planning a takeover robbery of a famous San Francisco jewelry store. Garrett has no doubt Wade would have committed more crimes, had he not been arrested. We've posted more of the evidence I found, including note from the jury to the judge. They were struggling with the attempted murder charge, not sure he actually intended to kill.
Related topics:
redwood citysan franciscotiburonmill valleycrimecelebritytrialsshootingi teamcaught on camera
Copyright © 2021 KGO-TV. All Rights Reserved.
RELATED 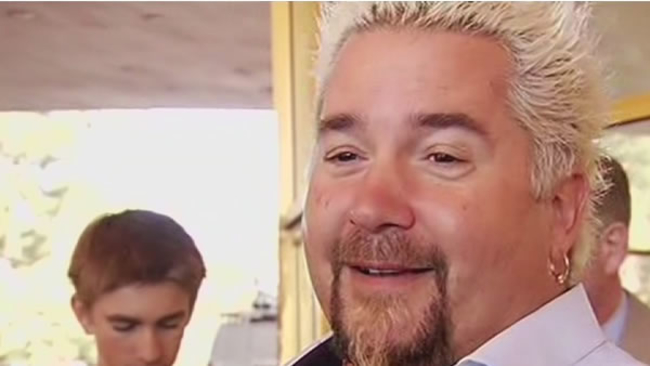