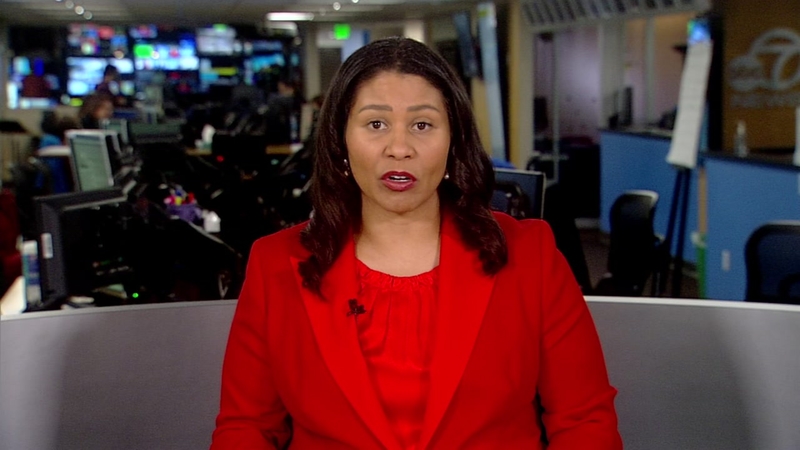 SF mayor has harsh words for feds amidst COVID-19 crisis

SAN FRANCISCO (KGO) -- The San Francisco stay-at-home-order has been in place for a week and Mayor London Breed came to ABC7 News to discuss what the city is doing to further protect the public and communicate facts during the novel coronavirus pandemic in the city.

President Trump on Tuesday said he is hoping the country will be reopened by Easter, but Mayor Breed was quick to reply that San Francisco has demonstrated quick action before the federal government.

"Why are we still listening to the president?" Breed said. "I mean, the fact is we here in our city, throughout states in the United States of America, we have demonstrated, sadly, that we had to jump into action and make this work without federal government support."

RELATED: Quarantined SF family shares daily updates about what it's like to be tested, isolated due to COVID-19 fears

Breed said, "Even here in San Francisco, we've had private companies go out and gets masks and PPE in general to support our healthcare workers. We've had to basically be innovative and work with the private sector to try and get the resources we need in order to make sure that public health was protected. The federal government just isn't moving fast enough. I know the speaker of the house, Nancy Pelosi, is busting her butt in Congress to try and get us the package we need that's actually going to help workers and not necessarily corporations."

"We cannot wait on the federal government to come through for us. We have to act now. And that is exactly what we've been doing in San Francisco," Breed added.

ABC7 News' Kristen Sze asked what the city plans to do about SF Public Health Officer Dr. Colfax's warning that the crisis could get a lot worse in two weeks, which is when the president hopes to reopen the economy.

"We just don't know when the peak is gonna occur, until it actually does," Mayor Breed replied. "What we are looking at, in terms of the numbers, I mean look at how quickly the numbers are rising. And what that means is we have to be ready. And that's what we've spending almost a month doing here in San Francisco, getting ready."

RELATED: Calls are mounting for SF to close streets for cars in 'social distancing' era

A growing number of people in San Francisco want to see the city take steps to socially distance even further. On Monday, Mayor London Breed said she was keeping the parks open for now but was growing frustrated with the number of people not keeping their six feet of space in outside areas.

"This is really about public health and public safety," Mayor Breed said in response to if street closures would happen. "And so we don't want to get to a point where we have to close down everything in order to get people to comply. We know that people need fresh air, they need to get out with their families that they live with is most appropriate. But when you start adding friends and you're having meetups and you're playing volleyball and you're crowding the beaches and you're not doing what we've asked you to do by social distancing from other people who are not a part of your household, you are putting lives in danger."

She warned that if people continue to gather in open spaces like Ocean Beach, Dolores Park of Crissy Fields, in large numbers, she wouldn't hesitate to take action.

"It's unfortunate, it's uncomfortable. I know it's hard for kids, I know it's hard for families and other people and it's hard on our homeless population. But we're gonna have to make adjustments. This, at this time, is the focus, it's our new normal, and it's ultimately about protecting public health and saving lives. And we have to what we have to do at this time to do that," Breed said.

San Francisco currently has a total of 152 cases in the city and plans to continue to the shelter-in-place order until further notice.