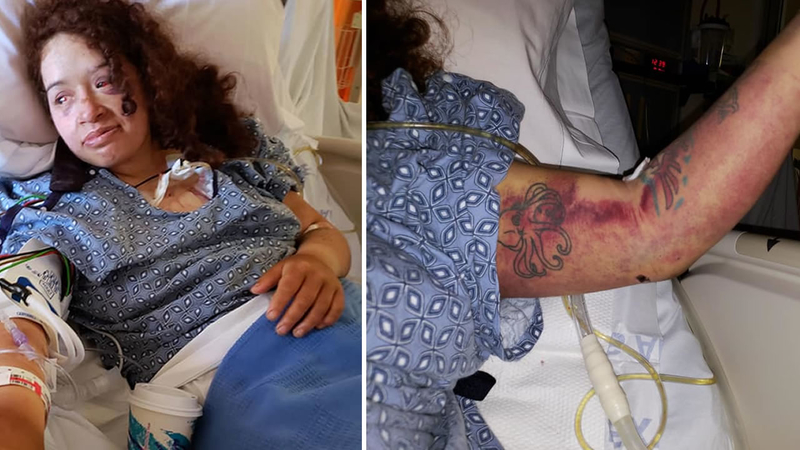 Angela Hernandez, 23, is finally sharing her story about being sent over a California cliff. Her remarkable tale of survival is making the rounds on social media. She posted pictures to her public Facebook page showing her injuries.

Hernandez was on her way to Southern California when she went missing on Friday, July 6. Surveillance video that was recovered later, showed her in Monterey County that morning.

The sheriff's office was contacted after a cellphone ping put her near the Carmel Highlands area. But deputies say an early search didn't show any obvious signs of struggle.

"If you're driving, you're not going to see," Sheriff Bernal told ABC7 News. "You would have to get out and physically look down there. Even then, it's really hard to find, to see something like that."

On Facebook, Angela described being so close to safety. "I could see cars driving across the cliff and felt like if I could just yell loud enough, that one could hear or see me," she wrote. "That's all it would take to make it back to my family, just one person noticing me."

"I think she just got it in her mind, 'I'm not going to die out here,'" said Bernal. "And I think she had a little help from God. I think somebody was with her."

Bernal says the same higher power put Hernandez' rescuers in the right place at the right time, in an area without cell service.

Beyond that, he says the couple who found her initially had plans to go surfing but settled for a hike on the beach.

Hernandez described that moment on Facebook. "When I sat up, I saw a woman walking across the shore. I thought she was a dream. I had a few just like this during the past few days. I screamed."

"I just want to thank everybody, everybody. I'm sorry I'm like in shock," said Hernandez' sister during the search.

Among other injuries, Hernandez wrote that she suffered a brain hemorrhage, a collapsed lung, fractures to four ribs, and an intense sunburn.