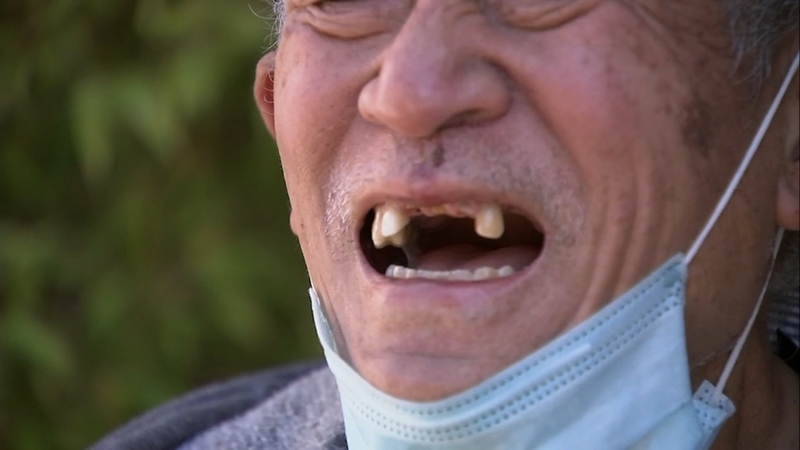 OAKLAND, Calif. (KGO) -- A 71-year-old man was brutally attacked, bitten, and dragged down an Oakland street in broad daylight, prompting a community leader and witness to speak out in hopes it'll encourage others to do the same.

"I love Oakland...but not anymore," said the man before he opens his jaws wide. The victim who is ethnically Chinese but identifies as culturally Latino and Asian shows off his mouth which is missing seven teeth. He doesn't want us to use his name, explaining how terrified he is after the run-in he had with a woman while retrieving a trash can from the curb in the Grand Lake neighborhood on May 19.

Speaking slowly due to his injuries, he explained how he noticed a car stopped near the home's driveway. When he asked the car to move "the lady pulled me from my back, pushed me toward the car."

The woman in the car allegedly tried to steal his wallet and cell phone. When she was unsuccessful, things took a nasty turn.

"To distract me she bit me on my hand...she grabbed my neck and she pulled my necklace and took it," said the man, who clutched a plastic bag full of medical fluid he purchased to care for his multiple bruises and scabs.

Already weak in the legs and using a cane the man reported to police that he fell onto the vehicle, was grabbed and dragged by the getaway car, facedown for 10 to 20 feet.

Carl Chan, Oakland Chinatown Chamber President and outspoken advocate for community safety was attacked himself just last month. Chan is credited with first alerting the public to the rash of violence in Chinatown, and helping merchants come forward with their stories. He met with the man Monday, not only to offer services through the nonprofit Oakland Chinatown Chamber Foundation but to send a bigger message.

"We need victims to speak out because we know they are so afraid. I'm saying let's not be afraid, let's come out and talk about it because together we can make these changes," said Chan.

At the scene of the crime, another message comes from a woman named Linda. She's one of several people who saw the incident happen but was the only one to help.

RELATED: President of Oakland's Chinatown Chamber of Commerce attacked on way to visit with assault victim

"The cars that were behind us saw, had to have seen him lying in the middle of the street, they just went around him and kept going. That was the thing that was the most shocking. No one stopped," said Linda.
While the 71-year-old is still shocked and in fear he's speaking out for his own reasons.

"I hope people will become more aware this is something happening right now. It's been happening for many years," said the victim.

He also wanted Linda to know how grateful he is to her.

"For being a Good Samarian to me and I will forever be grateful to her."

The man is quite concerned about the cost of dental implants and other medical costs which are already mounting. If you'd like to contribute to the nonprofit Oakland Chinatown Chamber Foundation which will handle the man's case and other victims' cases, donations can be sent to 388-9th Street #290, Oakland CA 94607 or through their online PayPal site