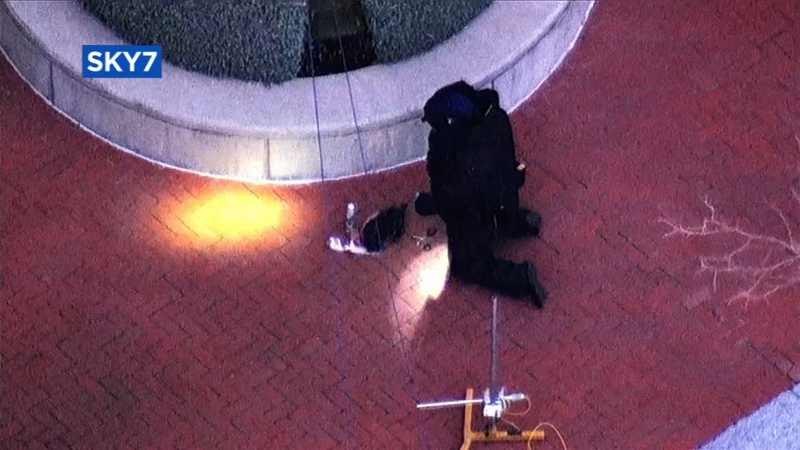 Suspicious device found near Oakland federal building was a hoax

OAKLAND, Calif. (KGO) -- A suspicious device found near a federal building in downtown Oakland is being called a hoax, according to the Alameda County Sheriff's Office.

Authorities say inside the package was a "specific message" to get the attention of law enforcement. That evidence has been turned over to the FBI.

"I would call this a hoax device," said Ray Kelly, with the Alameda County Sheriff's Office. "It was designed obviously to get our attention when we do our work. From there it obviously caused us several hours of work."

NEW: Per @ACSOSheriffs, the suspicious package left outside the Oakland federal courthouse was a hoax designed to get the attention of law enforcement.

Inside the package there was a specific message for law enforcement. That evidence is being turned over to FBI @abc7newsbayarea

SKY7 was over the scene when a bomb technician could be seen picking up the package and walking away.

Police evacuated the area between 11th and 16th Streets and from Jefferson Street to Broadway Wednesday afternoon as a precaution.

Authorities say a suspicious person was spotted placing the package down outside the federal building at 1301 Clay St., prompting that evacuation.

"We were able to preserve all the evidence we wanted to preserve," Kelly said. "Instead of opening it remotely and using our tools, which would have destroyed certain components and parts within that package."

BART closed the Frank Ogawa Plaza entrance to its 12th Street station in Oakland due to police activity. BART did not immediately say whether the entrance closure was related to the suspicious package at the federal building, but the entrance is in the evacuation zone.