"You've already declared war on us. Postpone this or I will put my body in the line with my educators," said one student
KGO
By Luz Pena 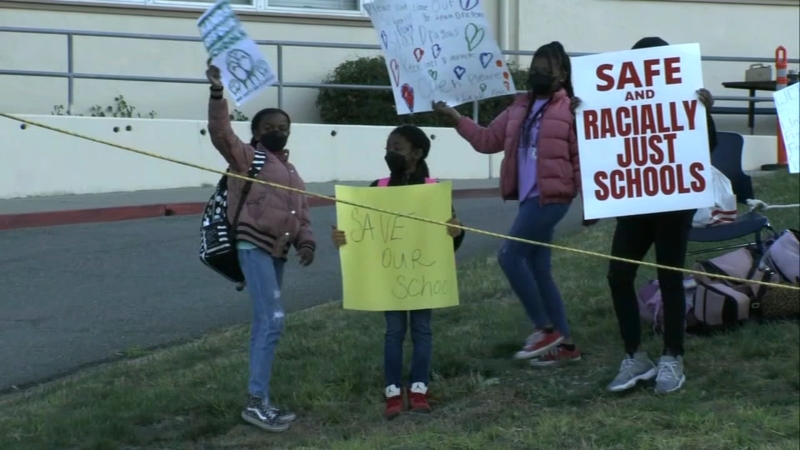 SAN FRANCISCO (KGO) -- Oakland Unified staff, students and parents are vowing to begin a hunger strike on Saturday. and continue the protest of school closures.

It comes after an emergency meeting of the school board Friday night during which board members voted down a proposal to modify the closure plan.

"Y'all put a show tonight. Do you think this going to work? This isn't going to stop anything. This is the start of it," Board member Mike Hutchinson calling out his colleagues after the 3 hour meeting failed to find a new resolution.

The two teachers who held a hunger strike for 18 days in hopes to prevent the closures accused the board of holding the emergency meeting to persuade them to end the strike and not to find common ground.

"Only reason why this meeting is happening is so we stop the hunger strike," said Andre San-Chez, a protester.

"You've already declared war on us. Postpone this or I will put my body in the line with my educators," said one student.

Day 8 of a hunger strike continues as Oakland Unified School Board is slated to take a vote Tuesday on a controversial proposal to close 16 schools.

"I'm going to have to sacrifice my own health," said another students during the zoom meeting.

"You still voted against us. You voted against the people you are supposed to represent. Every 16 to 17 year will register to vote," said a student.

Parents are keeping their kids out of classes in Oakland this week to protest a proposal to close or consolidate schools.

The school district said the closures are necessary due to declining enrollment and a budget deficit. The President of the Oakland Education Association asking for more time.

During the emergency meeting several board Members including the board president highlighted their stance.

"Now we must effectively use the next year and half for quality implementation. The money we will safe in smart and strategic school consolidation and the $10 million dollars we are requesting the state to release to translate this opportunity for sustainability into the reality of the thriving schools," said Gary Yee, Board President.

"We do have a declining enrollment. It's been in previous presentation. We do have a structural deficit that is evident in the presentations," said Benjamin "Sam" Davis, board member.

Community members accused the board of not doing an equity analysis before decision on these closures. Keith Brown highlighting most the schools are predominately black and Latino pointing to the negative impact these school closures will have on students of color.