As some businesses take matters into their own hands, OPD says, "I don't want to see security companies engaged in gunfire."
KGO 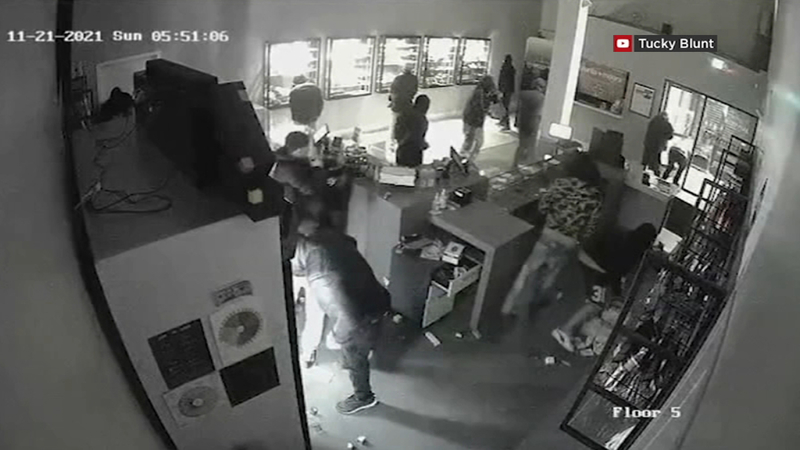 OAKLAND, Calif. (KGO) -- No one has more of a stake in making sure Oakland's Cannabis dispensaries are safe than Tucky Blunt, who owns Blunts and Moore in East Oakland, the same store pillaged by a roving band of burglars over the weekend.

Three days later, Blunt was among those on a zoom call with Oakland Police Chief LeRonne Armstrong searching for solutions.

"Someone's going to die on one of those sites and that's going to be the downfall of this business and we can't have that," said Blunt. "All I'm asking is if you know, this type of stuff is going on, send an extra cop around my area. Park one at my store. Just do things that we can do to work together."

Cannabis dispensaries are among dozens of businesses hit by roving bands of thieves and in some cases, the suspect exchanged gunfire with both private security and with police officers.

"I just want to be clear. I don't want to see security companies engaged in gunfire with individuals," said Oakland Police Chief LeRonne Armstrong at a press conference Monday. "I don't want to see these gun battles that are occurring as a result of these armed suspects coming to these locations."

The clothing store, 356 Prime, says this is the second time they've been hit in about a month's time.

Some cannabis businesses aren't waiting for help from the city or OPD and are taking matters into their own hands. Some boarded up their doors and windows and are filtering customers through a single door with a security guard on duty.

"What we're talking about is having more officers on-hand to respond to things that might peak up this weekend," said Oakland City Councilman Loren Taylor, who attended the virtual meeting. "So yes we are able to beef up the numbers of boots on the ground, through pulling folks in on overtime and through other surge units being activated."

Still, will Oakland's already understaffed and overwhelmed force really be able to offer its cannabis businesses enough additional help to head off the brazen crimes?

Dispensary owners like Tucky Blunt are willing to give it a try.

"We have been kind of left for dead," said Blunt, "but I think they understand more now where we're coming from like, we're not going through this no more."