5,000 people were inside San Jose's Oakridge Mall at time of shooting, police say 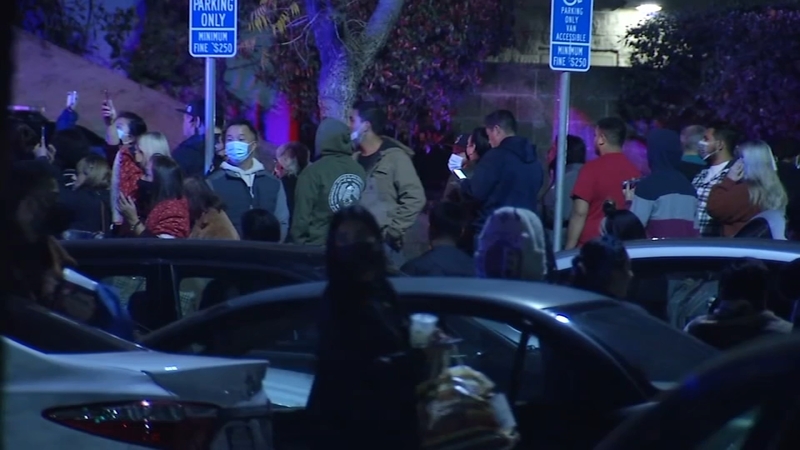 5,000 people were inside SJ mall at time of shooting, police say

SAN JOSE, Calif. (KGO) -- San Jose police say no victims have been found and no suspects have been arrested after a shooting at Oakridge Mall on Monday night.

Police responded to the scene at 5:48 p.m. after they received multiple 911 calls about the shooting near the Forever 21 store. There were reports of at least one shooting victim, but police have not located that person.

Officers said they used protocols to deal with a possible active shooter when they first deployed into the mall.

The mall was crowded with Christmas shoppers and the scene quickly turned chaotic.

"Speaking to mall management this morning, there were upwards of 5,000 people in the mall yesterday when this happened," SJPD Sgt. Christian Camarillo said. "We're very, very lucky an innocent bystander did not get hit."

Mall employees and shoppers were asked to shelter in place while police conducted the search.

After several hours, the search concluded and no suspect or victim were located. Police said there was no active shooter and it was an isolated incident. Evidence of a shooting was found near the scene, according to police.

"After the investigation, it was not an active shooter by definition," Sgt. Camarillo said. "It was an isolated incident between two individuals, one individuals produced a hand gun and fired several rounds."

SJPD arrested 43-year-old Abeer Hamed for reportedly interfering with an arrest at a San Jose Macy's store; the suspect was able to get away.

A day after the shooting, it was business as usual at the mall.

There were packed parking lots filled with people before Christmas.

"Well, I mean it is the holiday season and we've gotta move on with life," Shopper Denise Ochoa said. "So, just hope and pray for the best right?"

San Jose Mayor Sam Liccardo credits the quick response of SJPD, but another instance of gun violence has him pushing gun reform.

"We are a nation with more than 300 million guns," Mayor Liccardo said. "As long as that's the case, this peril is going to continue to be with us. We have to do everything we possibly can to reduce the risk of harm from those guns."

Until that time, police are left to deal with another crime at the mall.

Oakridge has twice been the target of organized robberies, the latest on Saturday.

Now this shooting. SJPD says they remain on high alert.

"Saturday night we were there within minutes of that incident being reported," Sgt. Camarillo said. "Yesterday, within two minutes, we had officers going into that mall. So, we're ready to respond as these incidents arise."

Anyone with information regarding this incident is asked to call the San Jose police detective bureau at 408-277-3835.

The public can also submit crime tips and remain anonymous by using the P3TIPS mobile app, calling the tip line at (408) 947-STOP, or on www.svcrimestoppers.org. If the information you submit leads to an arrest, you are eligible for a cash reward from the Silicon Valley Crime Stoppers.