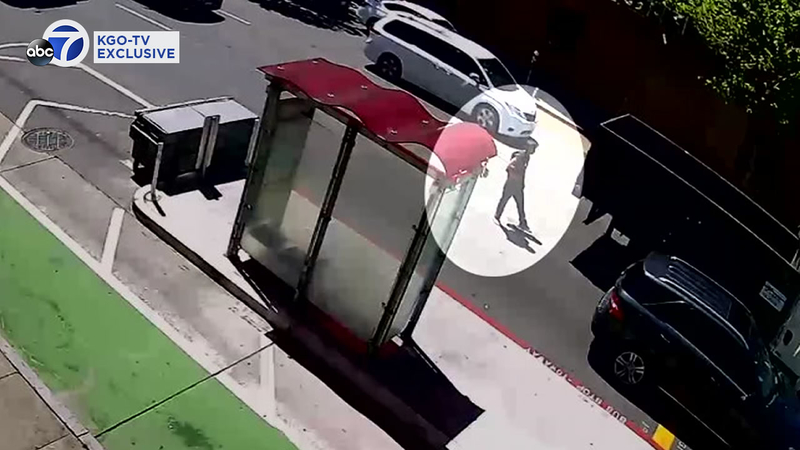 SAN FRANCISCO (KGO) -- Just seconds before he died in a crash with a truck in San Francisco's South of Market area, video shows pro skateboarder Pablo "P-Spliff" Ramirez grabbing the bumper of a truck and being towed through a busy intersection.

The surveillance video from the intersection of 7th and Howard streets, a half block from where the deadly crash happened.

It shows Ramirez being towed by a large dump truck through the intersection.

The crash occurs just a second after Ramirez and the truck disappear from the frame, but it does capture cars behind them suddenly stopping, possibly because of the crash.

The San Francisco Police Department's major accident team is leading the investigation into what happened, but a cause of the collision has not yet been determined.

Ramirez was part of the well-known San Franicsco skate group GX1000, whose YouTube videos have garnered hundreds of thousands of views online.

The group made their name for racing down San Francisco's iconic hills and steep streets.
Ramirez and the group were recently profiled in GQ Style magazine.

In the article, Ramirez was described as one of the most talented of the group because of his fearless, daredevil ways.

"Pablo will go straight through a red light and not even look at all," explained GX1000 member Ryan Garshell who is responsible for most of the group's videos. "It's up to the driver to stop and if they don't stop, that's it. Somehow he always makes it. It's really magical."

The magazine wrote, "Pablo Ramirez was a beautiful spirit, overflowing with love and unyielding energy. It's impossible to articulate the passion he brought to every waking moment, every session with the homies. A burning fire in our skateboarding community has dimmed. This is heartbreaking."

He wrote, "I was just with Pablo, drove to the dirt board event in Carmel Valley, CA together. We talked the whole way there about skating, sponsors and just life in general. We also talked about the old EMB/SF days, I can see he really wanted to know how it was back then and I was happy to share my story with him. He also told me how he made it to SF from NY and how much he loved The City, the skate scene and the vibe. We lost a good Soul today, Pablo Ramirez was a good human with a big heart. "Descansa en Paz Amigo."

The post went on to say, "Pablo was always showing love to anyone and everyone he met. He was a one of a kind with energy that would light up any room he stepped into. He was always bringing people together, for anything. Bombing, skating, music, art, poetry, bbqing.. he loved it all and was always getting others excited on what he loved. He would skate with every and anyone. He taught us that life is beautiful and his spirit will live on through the many souls he touched in his short time here. I love you Pablo!"

On Instagram, photographer Bryce Kanights remembered Ramirez, writing, 'The block of San Francisco's 22nd Street between Vicksburg and Church is so steep that stairs augment both sides of its sidewalks. This feat filmed by @gx1000 of Pablo Ramirez has always stuck with me as one of the heaviest moves that I've ever seen in skateboarding - street car tracks and all."