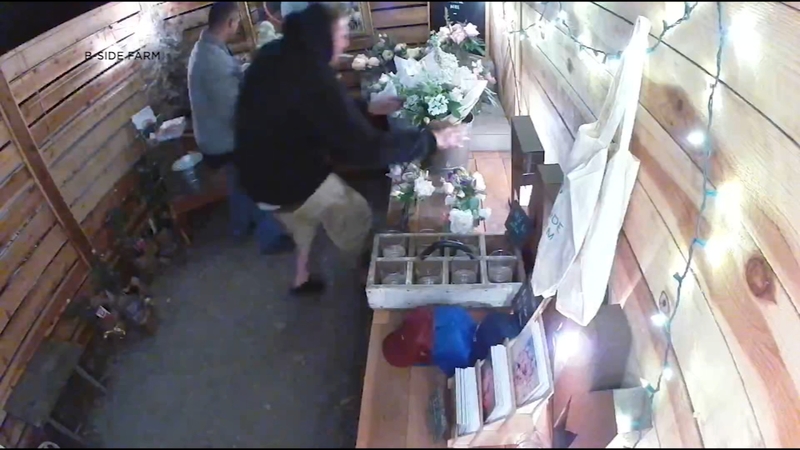 PETALUMA, Calif. (KGO) -- A North Bay florist says she is devastated after two thieves ransacked her flower stand early Mother's Day morning stealing more than $1,200 worth of flowers just hours before her busiest day of the year.

"It's like five or 10 times as busy as any typical weekend for us...so it means we've been on our feet for 15 hours a day with no break for the past week, cutting the flowers, buying flowers from other farmers, making the bouquets, getting the stand ready," Lennie Larkin, the owner of B-Side Farm and Flower Design in Petaluma, told ABC7 News. "And so to see all that work being just ripped out, it was absolutely devastating."

Video shows shattered glass covering the floors of the Oakland Post, the largest African American paper in NorCal, just hours after the robbery.

Larkin's shop is like something out of an old movie. It's a small, charming stand that sits on the side of a quiet, rural road in Petaluma. Customers also pay for her perfectly cut flowers through the honor system.

"Which typically is really joyful for everyone involved," Larkin explained. "People come in and they leave us little notes saying things like, 'I didn't know that the honor system still existed in this world. This reminds me of what my Grandma used to do with her sweet peas.'"

But on Mother's Day, that trust was broken - and brazenly.

Larkin woke up to learn two men had stolen all of the flowers she had prepared and put out for the holiday. Her surveillance video showed the thieves taking off with more than $1,200 worth of flowers.

A Petaluma florist woke up Mother’s Day morning to learn that thieves had stolen ALL of her flowers — worth more than $1,200 — just hours before her busiest day of the year.

"We saw the video of two guys coming in at 1 a.m. really quickly b-lining for the flowers," she said. "One slow dude and then a faster guy, like the Grinch, just crept over to my beautiful flowers and gobbled them all up. And they were in and out within 15 seconds."

Customer Brook McCann who lives nearby and came to look for flowers on Monday said she heard about the theft on Nextdoor.

"I thought it was pretty sad," McCann said. "Am I surprised? No, not really. There's a lot of desperate people around."

Larkin said she implemented the honor system at her stand for economic reasons. Her margins are too slim to support employees. But she's also come to love the nostalgic aspect of it - how it reminds people of a simpler time.

She said despite the theft, she plans to keep the honor system in place. "I'm sad that in this state of the world people are in a position where they feel they need to do that. and I feel compassion for the robbers," she said.

In good news, people in the community and florists around the country have pitched in to reimburse Lennie for the money she lost.

I will say, her flowers — especially her peonies! — are STUNNING. pic.twitter.com/Fp4UwDKVxu

In the 36 hours since the robbery, Larkin said the outpouring of support has been incredible. People in the community and florists from around the country have reimbursed her for the money that she lost.

On Monday, she put out stems of her specially-grown peonies as a thank you for all the community support. Her next step: getting a second security camera, and filing a police report.

As for her message to the thieves?

"Farming is hard work. It's joyful work, but a lot of time, blood, sweat, and tears went into this product," she said. "And I hope they consider that. it's not a victimless crime, you know?